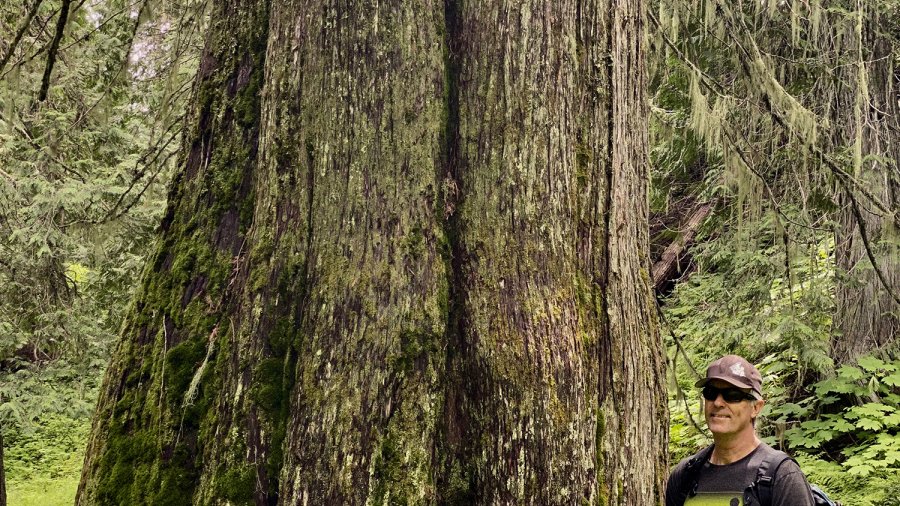 Many years ago, Terry Nelson came into our office and asked if we could help him publish a book. We had recently published the Fernie Mountain Bike Guide… written by me and designed and laid out by my partner in crime, Vanessa. Terry wanted something similar but hike-specific using the information he had been compiling for years. It was an enthusiastic ‘yes,’ we gave him some direction, and didn’t hear back from him until 2018. The Fernie Trails and Natural Plant Compendium was published early the following year.

This spring, the book was updated and reprinted as it had sold out! And now Terry is working on his newest book which shares his love and passion for big trees. I’ve known Terry for some time, as his wife Laura was instrumental in my discovery of mountain biking and Terry would often join us on our rides. These adventures are etched in my memory, as Terry would provide historical and environmental context as well as comment on the flora and fauna along the way. I also had the opportunity to volunteer alongside him on the Fernie Trails Alliance board, and his vision and passion for the mountains and trails is inspiring. So, just how did Terry grow into this mountain biking, trail loving, tree-hugging author?

While Terry was born in Victoria, he has lived all over Canada as his dad worked in industrial supplies and would create businesses where big projects were underway. In 1978, they moved from Calgary to Fernie where he finished his last two years of high school. Terry’s extended family lived in the Kootenay region and Kaiser Coal was expanding, so it was a good fit.

One of Terry’s good friends was Cam Kennedy, and he met his future wife Laura Kennedy one summer when she was home from University. “Laura has a different story, but I was in pursuit,” he tells me. “Laura says she picked me out of the crowd at the grand march and everything else is history!” Laura had plans to travel with a friend throughout Australia and New Zealand, and when that friend backed out Terry stepped in. “We travelled for a year together, it was true test of a relationship,” he says with a laugh. They moved in together when they returned, renting Terry’s stepfather’s house on 6th Ave. “Ryland was born in 1985, we got married in 1986 and then we moved to Vancouver where I went to school for Surveying.”

Their second son, Luke was born in 1988 during Terry’s second year and he remembers it being difficult for the family. “Two young kids, me in school as a mature student. It was tough times and we were both struggling,” he shares.

After graduating, Terry was offered a job with Shell Tech developing GPS receivers. He moved to Calgary for work, and Laura moved home to have the family support. Fortunately, Terry got a great position with the City of Fernie as an Engineer Tech where he worked until he recently retired.

Growing up, Terry remembers camping as a family every weekend “somewhere in the bush.” Living in Fernie as an adult, Terry says everyone goes out into the forest to bike, hike or walk. “It has always been a normal thing for me!” When out hiking or exploring, Terry says they have an appreciation and take the time to immerse themselves in their environment. “We take a bit extra, absorbing the moment and letting it penetrate. If you move through too quickly, and carry onto the next thing, it doesn’t have time to percolate into your system,” he adds.

While out adventuring, he noticed the trails had evolved and that there weren’t resources for the hiking community. “Fernie was on the cusp of breaking into the tourist world, and I had the knowledge,” he says. “I saw the mountain bike book and I was inspired by that.” Terry’s goal wasn’t to make money, but to share his knowledge. “It came down to me having a collection of photos and taking it from there. The plant compendium on the other hand was a whole bunch of research,” he tells me. “When people comment on the book, and how their son loves looking up the plants while they’re hiking, it’s a great compliment.”

Over the last year or so, Terry and Laura have been doing a lot of hikes and Terry began posting images of the big trees they’ve discovered with a little story about the significance of its location, its size
and age, and even information on the flora on and around it. The response was enthusiastic and immediate.

“There’s been lots of Old Growth Forest stuff in the media the last four to five years. The Ministry of Forests established criteria that would save trees by creating a buffer around them, but it pertained to coastal sized trees. My imagination started going… how big are the trees in the interior?” Terry says. “I would go find big trees and measure to compare. I measured the third largest Interior Douglas Fir in BC beside the Elk River… and the size of it wouldn’t qualify – it would get cut down. It has no standing on this list. It started me off on this larger journey of discovery… go find other species of trees in the interior and it just blossomed from there.”

Terry uses the UBC Big Tree Registry, which is online and a public domain. “People have nominated these trees, and I was looking at those tables and measuring trees that fit right in. There are a lot of big trees in the Fernie area!”

Going on these big tree hunts is strenuous. Terry hears about a big tree, and often it’s not along a trail and takes navigating up mountains and into the woods on uneven ground to get there. “It may not be easy, but it’s an adventure,” he says. And I can tell he’s up for the challenge.

While Terry says he’s always been a biker first, he has thoroughly enjoyed working on the content for his big tree book (set to publish in 2022) and feels that a publication like this could, “create a broader awareness of the importance of these old growth forests to the general public and provide an opportunity for people to expand and have these experiences. That’s what makes the world a better place.”

But where Terry feels he has gained the most is how this experience has expanded his network of friends and acceptance of like-minded people. “I am invited into the homes of the people who are the protectors of the environment.”

Thank you, Terry. For continuing to inspire us to discover and take in the beauty of the natural world around us.

1. When did you first arrive in the Valley and what brought you here?I came in 1977 on a ski holiday with my parents to check out Fernie.

2. Who did you first meet?
Dave O’Haire.

3. Do you remember your first general impression of Fernie?
It was a bit of a greaser town. I was a big tall blonde surf kid, and I was a bit scared. I had to fight a lot.

4. What keeps you here?
Friends, family and forests. The three F’s.

5. Do you have a favourite Fernie pastime?
I would have to say gardening.

6. What time of the year do you love most in Fernie, and why?
I like the fall the most, I like crisp mornings and golden larches. And I also like the deciduous component of the forests in Fernie that make up the mosaic.

7. Where do you see or hope to see Fernie in five years?
I don’t anticipate very much change in five years. I would say in ten years things will be a lot different. I hope that all of the baby boomers who are retiring and moving here all participate in the community and help to make it a better place.

8. How do you start your day or what is one of your daily rituals?
I get up at 5am in the summer and have two cups of coffee and currently, work on my book then have breakfast.

9. Tell us something people might be surprised to learn about you.
I used to have blonde hair!

10. Quote to live by: If you listen close enough, everything has a story to share!