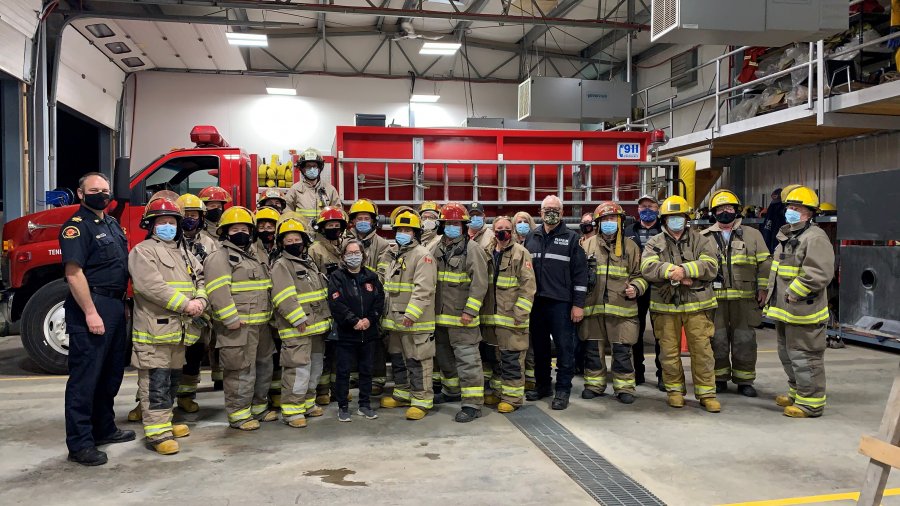 The RDEK is paying tribute to one of its long-time Fire Chiefs as he moves on to a new chapter in his fire services career.

After more than 30 years as a firefighter, including ten years as a volunteer Chief and 13 years as a career Chief of the RDEK’s Elk Valley and South Country Rural Fire and Rescue Service, Dave Boreen has moved on to a new role with the Office of the Fire Commissioner. “We want to thank Chief Boreen for his years of dedicated service to our communities,” says RDEK Electoral Area B Director Stan Doehle. “Beyond the hundreds, if not thousands, of lives he has touched along the way, he has shown innovation, passion and leadership in moving our rural fire service forward.”

With fire trucks lined up and lights flashing, members of the Jaffray, Baynes Lake, Elko and Hosmer Fire Departments lined the road to the Jaffray Fire Hall and stood in salute as Boreen arrived for his last official practice Thursday night.

“We are so grateful to have had someone of Dave’s calibre serving our region for so many years and are incredibly proud of what he has accomplished during his time with the RDEK’s Fire Service. While we will miss him immensely, we wish him every success in his new career where he will continue to contribute to fire safety in the East Kootenay as a Fire Service Advisor with the Office of the Fire Commissioner,” adds Doehle.

Throughout his career, Boreen was instrumental in establishing a new fire department in Elko; advocating for the establishment of Sprinkler Protection Units (SPU) for rural areas; expanding training in wildland interface firefighting; supporting new training opportunities for firefighters; and, providing support and mentorship to his colleagues in the Kootenays and beyond. This summer, he was deployed through the Office of the Fire Commissioner as an SPU Specialist on large wildfires in the West Kootenay and Vernon areas.