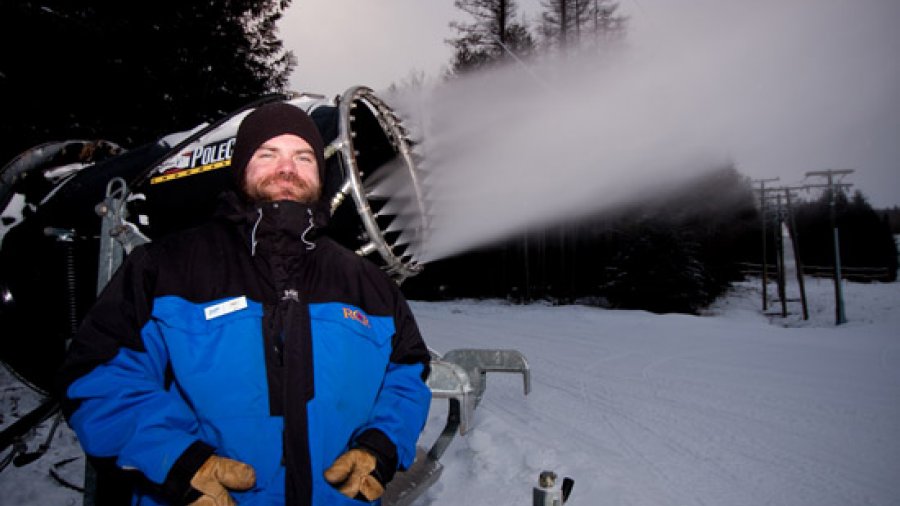 It looks absolutely gorgeous outside. The snow is sparkling, the sun is shining and it’s a blue bird day, yet I’m afraid to walk out the door. The temperature gauge says its -24. It’s freezing!

While I’m debating whether or not to even go outside Nate is already at work on the hill. Making snow. Outside.

Nate Trueman has been working the hill for the last seven years. He spent a year in the mechanics shed before getting into snowmaking and has worked his way up to supervisor.

I caught up with Nate on a ‘warm up’ break and he explained to me that when the temperature gets to -3 or below they can make snow on the hill.

“What we’re doing out here is padding the rain line on the hill. Early season we get really amazing snowfalls on the higher mountain, but just around the Bear’s Den you get a potential rain line, so we make snow to offset the natural snow with made snow at the rain line, to ensure that the upper mountain and base area stay connected early season.”

From November a crew of nine snow makers get in place to start the snow process. As soon as the temperatures drop they can start making snow, which ensures the main ski corridors stay open and it’s this snow making that ensures the ski hill opens as early as possible each season.

“The last three seasons the snow making has ensured that the hill opened on time. The ski corridor from the top to bottom of the Elk Chair, Mighty Moose and Falling Star are all key areas of ours.”

FAR has twelve fan guns on the hill and you won’t see them in action any higher than the Bear’s Den. They blow a fine spray of water into the air and nature does the rest. Freezing temperatures turn the water to snow by the time it hits the ground and within 24 hours you have a ‘whale’. That’s a big hump of snow to you and me.

Once enough snow has been made it’s left for a few days, so that any moisture can drain through the pile and then the snow plough team come in and spread the snow around. This is how they make the lower hill base layer.

One of my questions was how they cope with these freezing temperatures.

“When it gets in to the -20’s it’s hard on the teams and the machines for sure. The colder it gets the more snow we can make, but if the wind picks up that can add to our problems. If the snow starts swirling and blowing back into the fan gun it freezes up.”

The Bear’s Den yurt and fire is a popular warming-up spot for the snow makers. There’s a fine line between warming up and melting the snow on your jacket, so the guys stay higher on the mountain so that their jackets don’t melt and get wet. There’s nothing worse than having to pull on a wet jacket.

Nate’s favourite shift is the midnight to 8am, because he gets to ski as soon as he finishes his shift. He tries not to think about encounters with wildlife when he’s walking round the mountain in the middle of the night and his favourite nights are when it’s -15 with no wind. Perfect for snow making!

I went out to grab a quick photo with Nate and within 20 minutes I was done. My hands were freezing, my toes were going numb and it felt cold. Even with the sun shining! Nate said the key to freezing temperature endurance is layers and to try and stay out as long as possible.

Come February the team has built a base layer and snow making stops. They then get relocated to other jobs on the hill or they get to take their pass and ski out the rest of the season. They’ve earned it!

You’ll notice the fan guns when you’re next on the hill. They make a beautiful arc of snow and can often be seen around the base area doing their thing. When the sun catches them they sparkle.

Next time you pass one in action remember that someone is working it 24-7 when the temperature is right. And if you see Nate or the crew working the gun, buy him a hot chocolate or pass him a hand warmer! Chances are he’s been out there a long time.