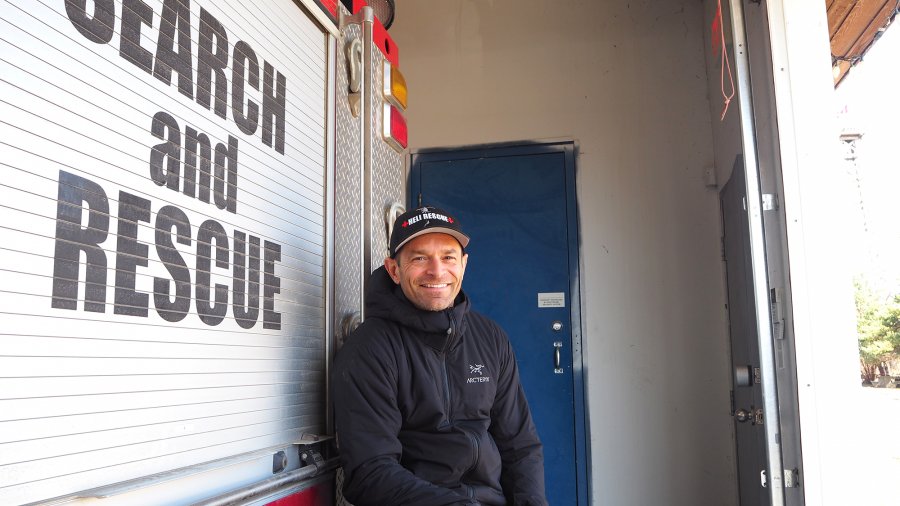 Our home is located in Parkland Terrace, overlooking Mount Fernie, the Three Sisters and Mount Proctor. Ascent Helicopters is just down the road from us. I am also an avid trail user and sit on the Fernie Trails Alliance Board.

All of these things are central to my knowledge and understanding of how busy Fernie Search and Rescue (FSAR) is, and how this grows with each year. As a volunteer and a fan of ‘type two fun,’ I have immense respect for these individuals who dedicate their time to rescue those who need help in the backcountry. And like Simon Piney, Head of Operations at Fernie Search and Rescue says, as an active community that regularly explores the backcountry, eventually something is not going to go according to plan.

Simon Piney grew up Geneva, Switzerland and spent a lot of time in the mountains and outdoors in his youth. “My dad was a big trail runner,” he says, which doesn’t surprise me as I know Simon continues to enjoy running up mountains to this day (as do his two sons!). He attended an English Boarding School, and with an interest in economics ended up at the London School of Economics. “Then, you go down that trail,” he tells me. “It led to International Finance, which was pretty fun. I worked raising money for companies around the world and was on a plane five days of the week.” But as you can imagine, this lifestyle can become tiring. Simon’s wife, Anna was also in finance and they decided that when they had kids, they would make a big change.

“We didn’t have any great plans, but knew we loved the mountains, trail running and skiing. I had instructed when I was younger and was looking into instructing courses. We had initially planned to go to Whistler but came across the Non-Stop Ski program in Fernie and thought, ‘we’ll do a season there and carry on.’ Like a lot of people, we didn’t make it further west.”

Simon and Anna enjoyed the shift to Fernie. Simon was back doing the things he enjoyed as a kid, and Anna having grown up in the English countryside was happy to be somewhere more relaxed. They had just had their first son, Mac and Anna found engaging with the community of younger moms fulfilling and welcoming. Simon started working as a ski instructor, and also got set up with Search and Rescue right away.

“I joined as a board member, there were six or seven of us back then who did everyone. We had a few Canadian Tire radios and a truck. We had no technical teams - it was based on individual competencies and ‘let’s see what we can do.’ We’ve changed the whole structure and have an independent board who we report to. I am Head of Operations, and work with a Leadership Team. The five of us are responsible for day-to-day operations. We have technical rescue teams – Swift Water, Avalanche, K-9, Helicopter Long-line, Rope Rescue and Ice Rescue. And we have to maintain professional accreditation.”

These changes were necessary, as when Simon started with FSAR, they would have maybe 10-12 rescues a year. Now, they are north of 40, sometimes with more than one in a day. They’ve seen a big shift seasonally, with summer becoming busier than winter. “It used to just be winter!” he says. The rescues are a wide range of things, but on the whole Simon recognizes that typically in our area people are experienced and prepared. “But sometimes, stuff goes wrong and calling us isn’t a failure. If you spend enough time doing these things, something is going to happen,” Simon says adding that when FSAR is responding, it’s always people who can’t walk out. He also wants to be clear that there is absolutely no charge for rescue in BC.

“This is deliberate. If people are scared to call for a rescue, they don’t call until the conditions are more extreme. It increases mortality rates and is a risk to SAR.”

Simon shares that one of the challenges are people’s expectations, and a lack of understanding of the terrain.

“People get frustrated help didn’t come quicker, mostly urban people. It’s hard to emphasize how different it is here. If you break your ankle on Heiko’s trail, you are literally in the middle of nowhere… on the side of a mountain. It’s difficult to get to these places, and we don’t have a helicopter sitting on a pad outside of our building,” he says. “It’s important to moderate your behaviour based on where you are. If you want to practice a back flip, consider doing it at the ski hill vs. at Tunnel Creek.”

One accolade important to acknowledge is that Fernie is a regional centre for long-line – from the Alberta border to Invermere.

“It took a lot of years to set up and fund and it’s been a huge success. Our ability to help people in need quickly and safely has improved dramatically with long-line. It’s life changing, and we’re super fortunate to have two amazing pilots here in Fernie - Dave and Greg.”

Where does FSAR hope to go from here? “We continue to try to increase the level of professionalism. The team itself, 30 people is a pretty amazing group from all walks of life… patrollers, paramedics, fire fighters, outdoorsy folks. We see people come out at 2am to help someone, then go to work. Or come off day shift and do a rescue.  We are fortunate in Fernie to have a lot of professional rescuers interested in getting involved in the back country.”

And Simon? Even though it can be overwhelming, he is happy to continue with FSAR for the time being.

“If I was no longer physically fit, or a new group was coming in I would move on. But for now, I want to continue doing more of the same. We love living in Fernie, it’s a great place to live with kids.”
One last tip from Simon.

“You can’t eliminate risk. What is your plan if it goes wrong? Do people know where you are? Do you have equipment to stay alive and a means of communication? That’s the big difference. We push out further and further into the backcountry, thinking we’re not far from town, but the terrain is as extreme as it gets.”

Thanks, Simon and the team at FSAR!

I know I’m not alone in feeling deeply grateful for your service to our community and its visitors.

1. When did you first arrive in the Valley and what brought you here?
2005, and we came for the snow.

2. Who did you first meet?
Dave Richards!

3. Do you remember your first general impression of Fernie?
Oh, we immediately fell in love with how big and close the mountains were.

4. What keeps you here?
Like most people, family, friends, the community and the outdoors.

5. Do you have a favourite Fernie pastime?
Changes with the season, but my favourite, favourite thing is mountain biking.

6. What time of the year do you love most in Fernie, and why?
I actually think mid-winter when it’s snowing a lot at night. I still get too excited to sleep.

7. Where do you see or hope to see Fernie in five years?
That’s a tough one. I just hope it doesn’t change too much. I think it will keep growing, but I hope it doesn’t lose its soul.

8. How do you start your day or what is one of your daily rituals?
I am not a coffee person. I get up and have a cup of tea, look at the world news and figure out what sport I am going to do that day.

9. Tell us something people might be surprised to learn about you.
I once dropped a brief case on George Michael’s head!

10. Quote to live by: No one died wishing they had spent more time in the office.