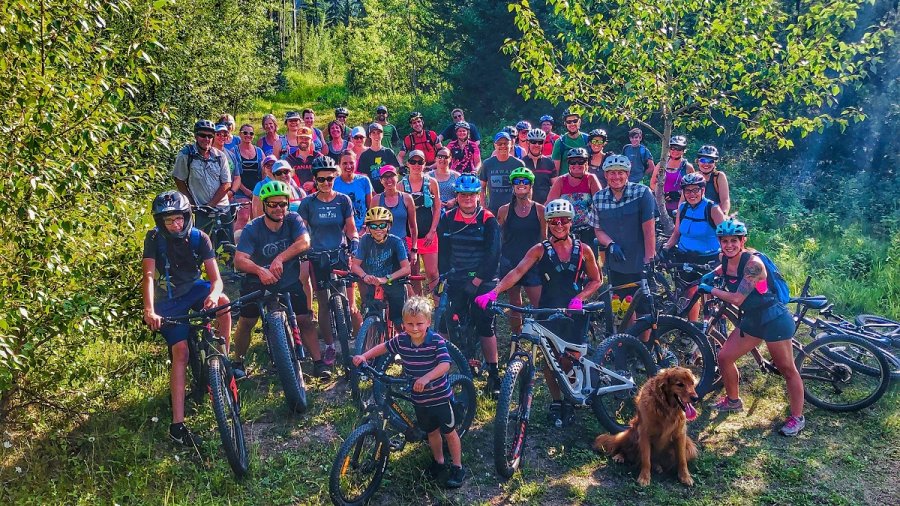 Walk, bike, hike, run or however you enjoy the front or backcountry, trails are critical for recreation. Around the Basin, 25 projects will be adding to or improving the region’s trails, with nearly $400,000 from Columbia Basin Trust’s Trail Enhancement Grants.

“The Basin has a remarkable system of trails, and residents told us to prioritize supporting projects that increase accessibility for more people to get out into nature,” said Tim Hicks, Senior Manager, Delivery of Benefits. “We are helping groups create new trails and rehabilitate existing infrastructure to support trail users with a broad range of interests.”

In addition to creating new trails, the projects are focused on repairing or replacing aging infrastructure, increasing accessibility for a variety of users, addressing erosion issues and adding new amenities. Learn more at ourtrust.org/trailgrants.

Here are a few of the successful projects from around the region:

Sparwood – Lunch n’ Ride
Sparwood has a growing biking and running community thanks to the work of the Sparwood Trail Alliance Association in developing new trails that are easily accessible to residents of every age and ability. “We have a number of run clubs that have seen folks out on the trails for the past 52 weeks straight, including families; we have bike clubs that see up to 30 riders in the evenings,” said Calvin Domin, director with the Sparwood Trail Alliance Association. “For a small community of 3,800, this is really significant.”

The new Lunch Loop trail will add 3.1 km to the existing Mountain Shadows Trail close to the downtown core and high school. Interconnected with shorter loops, the Lunch Loop will be a perfect way for people to get out on their lunchbreaks for a quick ride or run. Completion of this portion of trail will also provide users with a safe, flow-style trail that connects them to the rest of the area’s trail system via a new pedestrian tunnel under Highway 3.

“The evolving trail network here is creating increased well-being and better health in our community,” said Calvin. “The number of users we have now out on the trails year-round is something we have not seen before.”

Valemount – Clearing a Path
The Valemount Bike Park has become a recreation destination for many with a network of 50 plus kilometres of trail that connects the community with the backcountry. For Valemount Area Recreation and Development Association (VARDA) manager Curtis Pawliuk, the park’s growing popularity not only benefits the well-being of residents, it’s helping to boost the local economy.

“Getting people outside in a small community where there are limited recreation facilities has had real benefits for people here,” said Curtis. “We’ve seen lots of new users, lots of youth, and it’s also helped create a new industry. Two new businesses – a bike shop and shuttle - have started in Valemount because of the growth of our trail system. In June 2,549 riders used our Turducken Trail. The population of Valemount is a little over 1,000.”

With 25 existing trails to maintain, VARDA is meeting the challenges of weather and climate when it comes to an outdoor facility like the Valemount Bike Park. The last two years of early freshet have led to erosion on their steeper trails and the impacts of mountain pine beetle on local trees have resulted in considerable blow-down. To keep the trails safe, navigable and mitigate against future erosion events, VARDA is rehabilitating existing trails through things like danger tree assessment and removal, ditching and replacing culverts.

VARDA will also be providing increased user access to their system by creating 1,450 metres of a “green”, or beginner level, two-way trail that will also support better usability of their entire network.

“The new trail will serve as a connector through our trail system,” said Curtis. “Instead of being stuck on one side of the park and not having an easy way to get to the other side, the new trail will be a conduit across the network.”

Castlegar – Pointing the Way
Maps and other signage are critical trail assets that make a hike or ride experience safer and more immersive while also helping to protect the environment. With over 150 kilometres – and growing – of signed trail to maintain, the Castlegar Friends of Parks and Trails Society also has many maps, kiosks and regulatory signs to consider as part of an expanding trail network.

“We want to make sure the time spent by users out on the trails is safe, pleasant, comfortable and also educational and having updated maps and kiosks is a big part of that,” said David Hall, President of Castlegar Friends of Parks and Trails. “With an increasing number of users and more trails, we have to make sure our maps and signs keep up with that growth. It’s also important that we properly sign for environmental values, property and regulatory concerns. It makes for a better experience for everyone.”

New maps and regulatory signage at key locations across the trail network are planned for installation beginning this fall. It’s all part of the work of the Friends of Parks and Trails to make sure that hikers and bikers of all abilities have fun and remain safe. “It’s about being user friendly and supporting the comfort and confidence of people who go out on our trails, whether it’s their first hike or their 100th.”

Columbia Basin Trust supports the ideas and efforts of the people in the Columbia Basin. To learn more about the Trust’s programs and initiatives, and how it helps deliver social, economic and environmental benefits to the Basin, visit ourtrust.org.