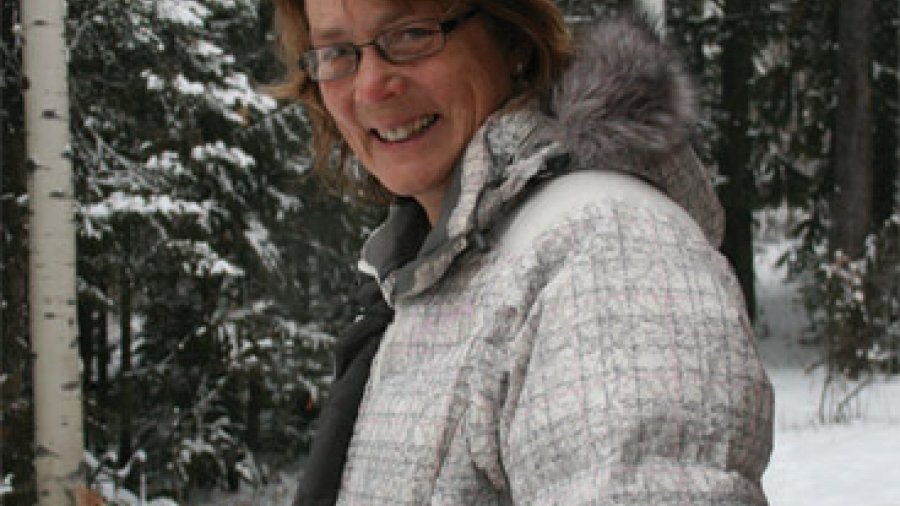 While Emily Brydon is omnipresent in Fernie conversation of late, her mother - the pillar of strength supporting this resilient Olympian – remains far from the forefront, hard to believe when you meet her. Taller than Emily with a witty sense of humour that takes you by surprise and a personality that fills the largest of rooms, Rosemary is hard to miss.

Originally from England, Rosemary’s journey to the Elk Valley began in Sunshine, Alberta. She was on a hike with a friend in summer…and it was snowing. On the way down, a guy in a truck stopped to ask if they wanted a ride. “It wasn’t until much later that we learned he was testing the brakes,” she remembers. The driver happened to be Bob Brydon, her future husband. Bob was in charge of grooming at Sunshine and when a friend of his, Dave Rogers, decided to move to Fernie to run the ski school he recommended Bob join him to work in grooming at Fernie Snow Valley. Rosemary made the move as well.

“There was just one snowcat in Fernie at the time, in 1975. I worked as a lifty, and actually was the first female lift operator in Fernie. There were only two lifts at that time, the Elk T-bar and Bear T-bar. And just two lifties on at one time, with no one at the top. And no bathrooms!” she says with a laugh.

Bob worked as the superintendent at the golf course during the summer, which eventually became his full time job, and Rosemary planted trees. “I believe that is why Emily thinks I’m a hippy, but I’ve never been a hippy!” she laughs.

Emily was born in April of 1980, and was skiing by the age of two and a half. “ By three and a half she was better than me!” Rosemary remembers. Like most young skiers in Fernie Emily became a member of the Nancy Green Program. Rosemary admits that it took a while for Bob and her to realize Emily’s potential.

“Each year she would just keep getting the results, and it would always be a surprise. The next year, up to the next level and we never expected it. Emily actually came home one day and said, “I’m really glad you are my parents.’ We asked why and she replied, ‘Because you don’t care if I win or lose!’ Some people fulfill their dreams through their children. Not us. We were always in shock and she got where she did on her own.”

Rosemary confesses that all Emily needs is for someone to tell her that she shouldn’t or that she can’t. From the beginning she was the underdog – Emily didn’t have the equipment or connections that most young ski racers are set with. “Her first pair of bent poles lasted three years, now she breaks a pair nearly every week!”

The BC Junior team was the first step for Emily, and she quickly went on to the Junior World Cup, the development team and then the women’s Canadian alpine ski team. Throughout her career Emily and Rosemary have faced many difficulties. From the passing of Bob Brydon, to severe crashes that left Emily rehabbing after major knee surgery, and the continual wear and tear on body and mind, the duo has persevered.

“The journey has really helped our relationship, and I’ve seen her grow into a very strong, well rounded person. She has a life outside of skiing and she has good friends. It’s also enabled me to visit places I wouldn’t have gone to…a lot of winter places. My trip to Monte Carlos was pretty amazing. Emily has always encouraged me to travel, and to take all the opportunities that arise.”

So, how does Rosemary feel about the possible end of Emily’s ski racing career?

“I’m so excited! I think it’s going to be a great season...and I’m ready to move on. It’s time for her to get into her second career. I don’t think people realize the wear and tear on the body, the year round training. Of course she’s going to miss the lifestyle, but she’ll have freedom to do what she wants when she wants.”

Lake Louise was the first time Rosemary had the opportunity of seeing Emily podium. “It was something I always dreamed about and for it to be at Lake Louise was amazing. That alone was enough,” she adds.

When it comes to the Olympics, Rosemary considers herself a third time Olympian and is prepared to join in the celebrations and cheer on Emily alongside the other Canadian athletes. But when it comes down to it, Emily has already made it in Rosemary’s books. And in ours!

2. Where did you first live in Fernie? Frank Lanchester’s house, riverside in the Annex. Dave Rogers, Bob and I!

3. What was your first impression? When I came in the winter it was close to New Years Eve. I had just flown back from England, and thought I had learned the rudiments of skiing through my time at Sunshine. I went to the top of the Bear T-bar…and couldn’t move. They hadn’t groomed! It took me the next 33-36 years to learn to ski powder.

4. What keeps you in Fernie? Friends and the feeling it’s home. That should cover it.

5. Do you have a favourite Fernie memory? One April Fools day, when we only had the two T-bars, we tied two chairs to each T-bar. Our first chairlift!

6. What is your favourite time of the year in Fernie and why? They’re all my favourites! I love to snow shoe and I like to hike. Can I tell you my least favourites? April and November.

7. Where do you see Fernie in 5 to 10 years? My dream or reality? Pretty much where we are now. I’m not negative about development, I just think it should be done tastefully with some controls. Not a free for all like it seems to have been.

8. How do you start your day or what is one of your daily rituals? Walking the dog, -30C whatever the weather, pouring with rain. Definitely a ritual.

9. Tell us something people might be surprised to learn about you. I don’t think my friends would be surprised about anything! We didn’t have a TV until Emily was 16 and only then because she was on it! Still, no cable.

Quote to live by: Basically @%$# happens and just get on with life!