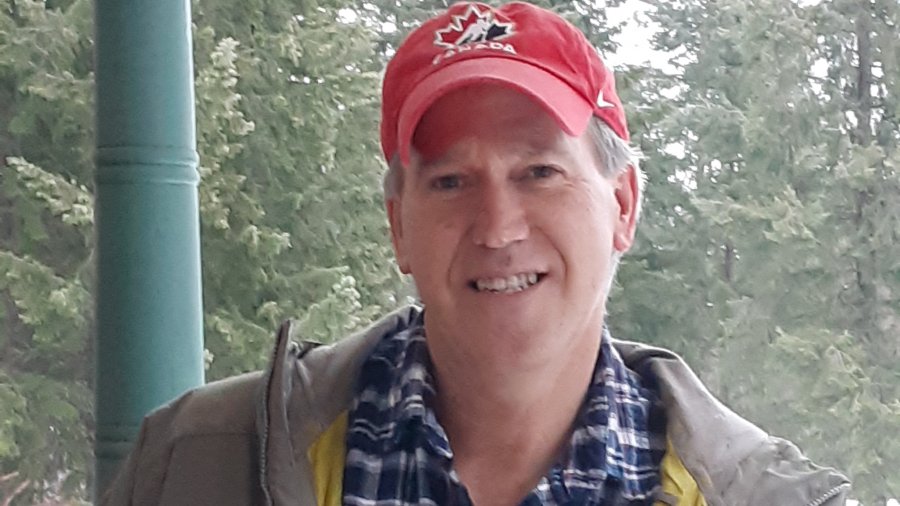 During the winter season, many of us start our mornings by checking the Mountain Weather on skifernie.com. After so many years, forecaster Ron Lakeman feels like a trustworthy old friend, who puts honesty first whether it’s rain or massive amounts of snow he’s sharing with us that day. Ron is how we stay connected with the weather, how we make our plans for the week ahead… “okay, well ‘heavy at times’ on Tuesday night. Wednesday morning office chair it is!”

So, just who is Ron and how did he get into meteorology?

Ron is originally from Ontario, “don’t hold that against me!” he says, and moved to Calgary for his post-secondary education. He has been interested in natural sciences from a young age, and when his wife
saw a posting in a college magazine that Environment Canada was hiring, she immediately thought of him. “I applied, and it was a long process with a whole lot of training. I got the job and found that
I really enjoyed it!” His first posting was in the Northwest Territories, where he spent three and a half years until he was transferred to the Castlegar office in 1988. “I have resided in the West Kootenays ever since and love it here!” he shares with me. Ron worked with Environment Canada for ten years, and then in 1998 started working with the Provincial Government, BC Wildfire Service until he retired two years ago.

“We’ve always had a presence with winter forecasting in Fernie, even with the Province we covered ski resorts and snow avalanche programs. When I retired, Robin [Siggers] approached me to ask if
I could continue forecasting as a private consultant,” Ron says. “It’s a challenging job, as it’s as much of an art as it is about science. It’s really rewarding when you get it right! Fernie is one of those unique places, with the Elk Valley forecast being produced for Sparwood… and Fernie and Sparwood are apples and oranges most of the time. Pattern recognition goes a long way when forecasting!”

So, just how does the weather work in Fernie?

“There are a couple of things. If you look at the climate in Cranbrook, Fernie and Sparwood, they’re not that far apart but the climates are night and day. Pacific moisture comes over the coastal range to the east moving over several ranges. Fernie is on the edge of the Rocky Mountains, where the system is forced to go up. It’s the prime spot, a typical Pacific system gets the lift and heavy precipitation.

“The other one, the classic is the Arctic airmass coming down from the Yukon or Territories, and the prevailing flow moves to the east as it comes south. It follows the terrain and is funneled by mountain ranges – the big one being the Rocky Mountains. It never crosses the Continental Divide into BC but occasionally it comes into Southeastern BC. When it all comes together – the Pacific and Arctic combined, that’s when you get the Fernie Factor and more snow than other locations. But it’s all about timing! It’s a fine line, and computer models have a tough time showing it. It’s all about fine tuning whether it’s a big dump or not.”

When it comes to longer term forecasting, whether it’s for a wildfire or a ski/snowboard season, “We try, but in reality what we have to our availability is quite limited beyond seven days,” Ron says. The first thing forecasters do is to explain the limitations. For example, in Southern BC El Niño commonly means a mild season with an early spring. La Niña on the other hand is cooler than normal and commonly results in more snowfall and a later spring. “This year is a La Niña winter, and so far it has relevance with frequent Arctic outbreaks. It’s good to know before a season, but we still need to do five-day forecasting.”

In regard to the wildfire season, Ron tells me that as much as snowpack has an impact, it all comes down to the weather patterns. “Snowpack can be irrelevant with an early heat wave. If you look on
a year-to-year basis, and you say Fernie gets this much precip on average and look back, it’s not common to have a year 10-20% outside of that average. If we have a few months of dry, we’ll likely have a few months of wet. It averages through that way. Regardless though, June can be a key month.”

It’s so wonderful finally meeting (over the phone) and talking to Ron, his passion and knowledge are inspiring and I appreciate my daily forecast even more. Ron starts each day at his computer pulling out all of the models, satellite imagery, and radar, analyzing it and then writing his forecasts. He continues to consult with three clients in the East Kootenays and does some work for the Ministry of Transportation avalanche program. Interestingly, Ron is not a skier! “I’m more the hockey player,” he tells me. “I was into sledding and snowbiking but now that my son has grown up, I don’t get out as much.” He and his wife really enjoy living in the Kootenays. “It’s the perfect location as far as I’m concerned. Having lived in a city and in the Arctic, it’s the perfect in between. We have all of the outdoor activities just out the door and the amenities without the crowds.”

And can we continue to depend on Ron, and the connection he provides us throughout the winter season? “I really enjoy it. I spend 3-4 hours on this, and the rest of the time is mine. It’s a breath of fresh air, and now I can do it at home which is super convenient. It gives me a routine, but I can still get out and do the things I like and am not tied to the desk like I had been,” he tells me. It seems we can, at least for awhile!

1. When did you first arrive in the Kootenays and what brought you here?
1998 and it was a transfer within Environment Canada.

2. Who did you first meet?
Robin Siggers and Dave Aikens, he’s the guy who phoned us every morning before Robin was involved.

3. Do you remember your first general impression of the Kootenays?
Spectacular outdoor opportunities. That and the climate was quite hospitable, we don’t get really cold winters! We had moved from the Territories where -30 or -40 was quite common! It felt warm.

4. What keeps you here?
We find the area to be the perfect in between.

5. Do you have a favourite pastime?
In the winter I’m more of a hockey player, in the summer boating. My son got me into dirt bikes eight years ago and in the last few years we are dual sports, I got my motorcycle license and have gotten into touring about. Golf has also become big the last few years.

6. What time of the year do you love most and why?
The month of October, as a kid it used to be August. Having been a fire weather forecaster it became too busy and no longer my favourite… I actually started to dread it. In October, fire season is over, winter hasn’t come yet and you can still get out and enjoy the outdoors.

7. Where do you see or hope to see the Kootenays in five years?
I hope it doesn’t change much!

8. How do you start your day or what is one of your daily rituals?
As far as winter, it’s a cup of coffee, let the dog out, light the wood stove and start pulling up computer models.

9. Tell us something people might be surprised to learn about you.
That I’ve never skied Fernie.

10. Quote to live by: As far as weather forecasting, it’s that we strive for perfection, we rarely achieve it, but we never stop trying.