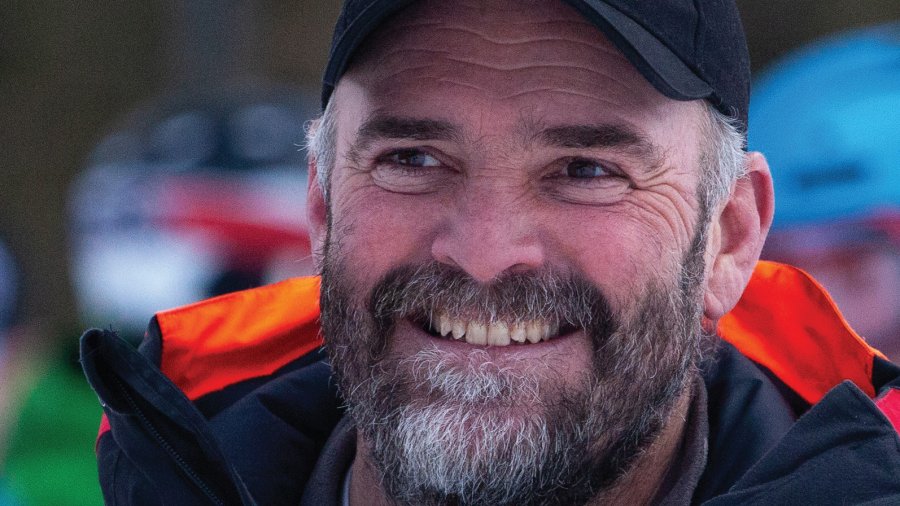 This year, we registered our eldest in FAST. It was a tough decision - she had just started kindergarten and we were worried an additional full day on the slopes would be too much. Let me tell you, the first week was a bit of a shocker for her (and us) but as the season continued, we saw a smile on her face, a sense of pride, new friends being made and her becoming an even better little ripper… and her little sister too, as God forbid she be left behind.

We also became part of the FAST community, and created relationships with coaches, parents and athletes. This April we attended the FAST season-ender party. It was the most energetic event I have ever
attended, and also an emotional evening as head coach Rod Timm was being honoured for his 30 years of coaching in Fernie. The love and appreciation for this man was palpable, and his passion for the sport so visible as he humbly received the recognition and award.

So, how did Rod end up coaching at such a young age and continue along this path for 30 years?

Rod grew up in Calgary, where he ‘did the whole Nancy Green thing’ starting when he was three years old. As the youngest of four, Rod was determined and had the passion and work ethic to keep on going. “Work ethic trumps everything,” he tells me. “Someone who works hard, chips away at it.” When Rod decided to move on from racing (“I had the ethic and drive, but probably not enough talent”) he went straight into coaching. First at his club in Sunshine, and then in Edmonton as head coach. “I was 19.” He had the desire to move to BC, and heard that Fernie Snow Valley’s coach Nancy Jo was retiring, “so I came here!”

“In 1988, there were 16 kids,” he tells me. “A pretty small core group.” But into the 90’s, the club grew to 100, until 1995 when it fell down to 30. “We didn’t know what was going on, that’s when the rebuilding started. We wanted to make ski racing look more fun, and to change the illusion that only wealthy kids could do it. The programs had to match what people could afford, and we started to grow pretty
steadily and the fun factor was there,” Rod says. Interestingly, the club started to feel as though they were losing their competitive edge… it was a balancing act! From this realisation, the Friends of FAST race series was born. This is a club series that includes three races throughout the season to expose kids to a race setting, designing a course set to a U12 level. “The little guys ski up to that level, and big guys have fun.”

This led to the club realising a better hill was needed to facilitate training and racing, and Emily’s was born. “We took a dozer and made it to what it is now. Then we ran out of space, and partnered
with the hill to build Spruce Lee for the U16 and FIS kids to race on.” The most recent investment is the water injection on course, which they are in stage one of. “We had enough capacity to do one test at the Christmas Camps, and it works great. We need four more tanks, and a system to collect water. We’re hoping to get this done this summer.” Water injection provides a consistent surface that is hard and grippy.

After focusing on the base of the program, and making sure everything is running well, attracting people to FAST, and ensuring team members, families and coaches are happy, Rod’s focus is turning to getting kids to a higher competitive level. “We’re constantly trying to change the coaching program, supporting a core group pushing for the BC Team is the big goal.” He also shares that they focus on the younger kids, to ensure they “get down to them.” Overall, the organisation works towards being balanced and ensuring kids are following the team motto - “Top performance, on and off the slopes.” Rod plans on continuing to coach with FAST. “Even when I’m not the program director, I’ll still coach,” he tells me, exemplifying his love and dedication for what he does and the community the organisation has built. “It’s easy coaching, because the kids want to be there.”

Congrats on a monumental career, Rod. We look forward to continuing to be a part of the community you have created, and to seeing what you do with the next 30 years.

1. When did you first arrive in the Valley and what brought you here?
1988 to coach FAST. Actually, it was Fernie Snow Valley Racers.

2. Who did you first meet?
Mike Skippen when he gave me my interview. All he asked was if I had a Class 4 drivers license!

3. Do you remember your first general impression of Fernie?
I thought it was great, loved it right away.

4. What keeps you here?
Training the kids, but we love it here and it’s a great place to do everything we love to do.

5. Do you have a favourite Fernie memory or pastime?
We dirt bike as a family, that’s our pastime. Raced cross country with Alec Cook for years. We do a lot of cross country riding, but mainly on our property.

6. What time of the year do you love most in Fernie, and why?
Well, I really love December to March, but my favourite month is September. Temperature is amazing, with clear skies. A calm, cool morning, but still warm in the afternoon.

7. Where do you see or hope to see Fernie in five years?
I think, maybe just slightly better with some affordable housing for people to be here, definitely not crazy like Whistler. I hate seeing empty houses. Somehow we need to attract younger people here.

8. How do you start your day or what is one of your daily rituals?
Cup of coffee, then make sure the animals are fed.

9. Tell us something people might be surprised to learn about you.
Maybe that I have goldfish and I put them in a pond in summer and I really like them!

10. Quote to live by: To try hard.
Constantly telling kids that!