The Return of the Wapiti 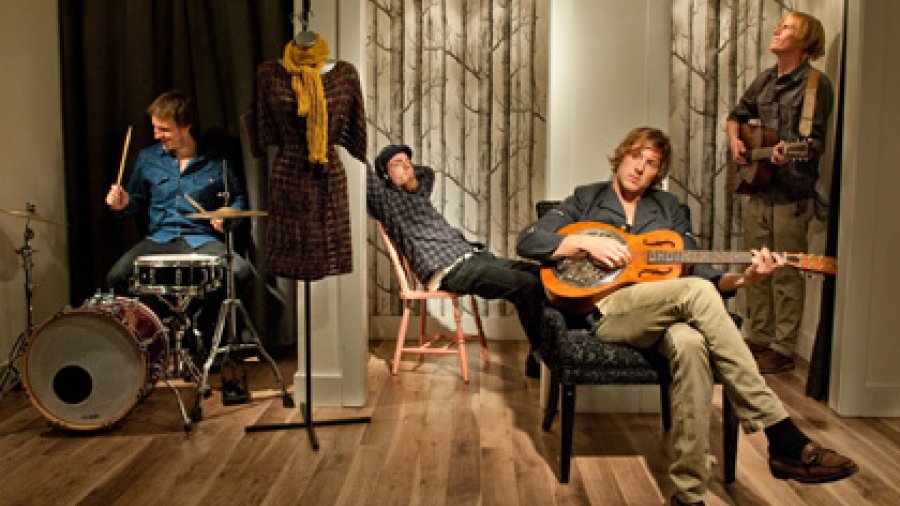 This month marks the third annual Wapiti Music Festival, which has become one of Fernie's hotly anticipated events of the year. The last two summers proved that Festival organizers have the magic touch and the 2013 lineup is just as exciting. To entice your eardrums, here is a rundown of the lineup.

Plants and Animals
Based in Montreal, this trio is making its first trip to the Western Canada for Wapiti. This band formed in 2002 as an instrumental outfit, and the music shows in the improvisation. Even with the addition of vocals to the sound, Plants and Animals is not afraid to take sonic chances. It wasn't long before its crunchy guitars and smashing drums were making waves on the indie rock circuit. Its first full-length album was shortlisted for the 2008 Polaris Music Prize. (The Polaris is a coveted award, as music aficionados from across the country judge bands on artistic merit, not on sales or mainstream popularity. Past winners include Feist, Arcade Fir, Caribou, Patrick Watson.) The following year, Plants and Animals was nominated for two Junos.

Current Swell
This Victoria band probably needs no introduction to Fernie, as it has packed our bars with its West Coast vibrations. A righteous group in its own right, Current Swell has had the honour of opening for the likes of the Beach Boys and Xavier Rudd. Formed in 2005, the band began as a group of roomies who played in backyards and on beaches. Eight years later, the five-piece band has won over fans from as far away as Byron Bay and Rio de Janeiro. Current Swell's considerable stage experience will entice young and old onto the dancefloor with its organic rootsy rock. No sitting through their set is allowed.

Shred Kelly
Only those living under rocks will have looks of confusion when the name of Fernie's success story is mentioned. This five-piece band rocked the stage in Wapiti's inaugural year, but of course, the story doesn't end there. The band participated in the 2010 Cultural Olympics and last year, Shred Kelly had the honour of participating in CBC's Tracks on Tracks train adventure, as well as being voted Artist of the Year at the Kootenay Music Awards. The band's evolution and successes have been exciting to watch for locals and has caught the notice of fans far and wide. This summer, Shred Kelly is embarking on a cross-country tour that will take it to the far reaches of the East Coast, where they are sure to create a strong crew of believers, and back again to play Shambhala, Wapiti, Edge of the World and Robson Valley.

Loon Choir
A seven-piece band from Ottawa, Loon Choir's pop-py projections are made all the more beautiful by the vocals of Nicole Yates and Derek Atkinson. Her voice is the stuff of unicorns and rainbows, while his simply yearns. Formed in 2009, Loon Choir has two albums to its credit. The most recent, 2012's Fire Poems, brought the band the attention it clearly deserves. Loon Choir's haunting sound is complex and fully realized. Sonically, there is so much going on, and it is difficult not to become smitten. Theirs is the sound of love and summer.

Portage and Main
This band's name speaks more to its sound than to its geographical location. Based in Vancouver, Portage and Main sound like the legitimate offspring of the Guess Who and the Band. Theirs is the kind of music that should be blaring from speakers of an older model convertable. The five-piece band's countrified rock is like your favourite pair of jeans and t-shirt - no pretension. Formed in 2011, Portage and Main's first gig was also its album release. Its members had played plenty of gigs with other bands and they decided that Portage and Main wouldn't be one of those bands that played lots of gigs and never recorded a thing. But less than two years later, the band has already released a second album – which it brought to Fernie back in the winter.

No Sinner
Also from Vancouver, No Sinner is no holds barred rock and roll held up by the raunchy vocals of Colleen Rennison. If your life was a movie, No Sinner's music would be the soundtrack the audience would hear when you were getting into trouble for doing something fun. It is full of swagger, sweat and sin. If Fernie doesn't fall in love with Rennison, that's okay, she's got enough soul for the whole Valley.

The Good Ol' Goats
This band of merry youngsters – high schoolers, one and all – hits the road to Fernie from Cranny with accolades already in hand. These kids beat out a field of other talented Canadian bands (including Shred Kelly) to take Best New Artist in CBC's Searchlight contest last winter. The Good Ol' Goats bring complex bluegrass arrangements with two banjos, dobro, mandolin, fiddle, standup bass and some surprising seasoned vocals.

Devon Coyote and the Midnight Howl
Perfect for a hot summer day, one cooled with an icy, cold beverage, Devon Coyote’s music is bluesy and authentic. Between slide guitar and foot stomping, the Kelowna native’s barn-burning live show reveals a band of musicians who could think of no other place they’d rather be than up on stage. Devon Coyote comes by his stage chops honestly, relentlessly touring and performing.

David Celia
This Toronto native’s eclectic sound, ranging from Corb Lund-style drawl to early ‘70s sugar pop, has a little something for everybody. Armed with strong lyrics and guitar sensibilities, David Celia takes his audience on a journey across the country in his songs. It’s not that his lyrics necessarily talk about being on the road, only that he evokes our country’s regions in his sound. It’s easy to imagine the different places you might hear songs like “I’m Not Texan” or “Séverine.”

Inlet Sound
The perfect Friday night band, Inlet Sound warms with its soothing folk-rock, indie-pop. The quintet released its debut album – The Romantics – last October, and it’s a record that is both innocent and mature at the same time. It is the feeling of realizing that the world isn’t quite as magical as you believed in your youth, but it is still quite beautiful.

Delhi 2 Dublin
Describing this Vancouver band’s sound on paper makes them sound improbable. How do you tell someone that Indian tablas and Celtic fiddle can actually work together, sonically, and sound amazing? With a raucous stage presence, Delhi 2 Dublin will be a great cap to a weekend full of amazing and diverse music. You’ll dance and clap and stomp and yell.