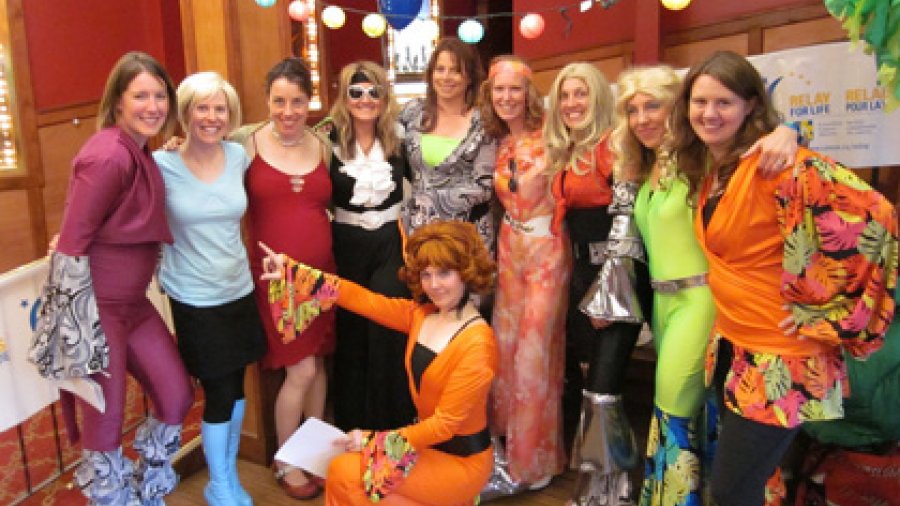 June. A month when the sun shines and the Fernie summer community ‘thang’ kicks off. One major community event early in the month is The Elk Valley Relay for Life, where a specific ‘gaggle’, for want of a better word, of women have taken their involvement and fundraising achievements to another level. This month’s Unsung Heroes are The Snow Sisters. They excel in high heel sprinting, naked sports modeling and spandex wearing. Not to mention have incredible fundraising capabilities, bringing the town together for a really good time. Over a glass of wine and bag of chips, I learnt The Snow Sister’s story…

How long have you been a team?
“We’re in our seventh year now, we started in 2005”. They started as a few individuals, but soon began to grow. Gradually over the years, the wintertime ski gang, known as Chicks on Stix, became springtime bikers and eventually an annual fundraising force to be reckoned with.

What changes have The Snow Sisters brought about over the years?
In the start it seems they used the usual fundraising tactics, as they call “draining email contacts”. A trying task as anyone who’s ever tried to raise money before will tell you. You feel cheeky, annoying and spend forever drafting the friendly, yet not too OTT email reasoning why, for the fourth year in a row, someone you haven’t seen in ten years, should donate. It’s tough and so a few years in, with the team complete, they changed tact and instead brought their fundraising to the forefront of the community. “It’s much easier and more fun to make money as a team. We’re a group of do’ers!” they say.

Not only did this help their fundraising efforts and create goals they thought previously unimaginable, it also brought about realizations that cancer really is somewhat of a constant factor. Every Snow Sister has a close relative affected, has a story to tell and acknowledges the truth of it all, in that “it can affect anyone.”

What has been your biggest team fundraiser to date?
“The naked calendar in 2009!” a unanimous response from all the ladies, whether they had a mouthful of chips or not. It, “stepped it up a notch” and “set the standard” resulting in a “greater impact on the community through events and the amounts raised from them.” A calendar with 12 beautiful ladies subtly (or not so subtly), strutting their stuff raised a whopping total of $10,000, with the help of photographer Kirsty Morris. It was a tangible item that people could take home and look at (hopefully not too closely), but they didn’t stop there.

How much have you raised so far?
In 2010, the premier showing of Sex & The City 2 raised $7,000. Last month, they raised over $5,000 through the Mamma Mia showing with foot stomping after parties at Picnic. Both came with great outfits, brave men walking the plank in the Man Auction and dancing. In a town with few chances to wear heels, believe me, such events get the town going. And, with seven years of success under their three inch gold belts, they have been the top fundraising team in the Elk Valley three years in a row. Anyone keen to take these ladies on? They’d be the first to say you could.

What are your fundraising tips?
The calendar started the ball rolling, setting incredible fundraising standards, but it also encouraged others. Fundraise as a team and involve the community. Another crowd pleasing event was the Heel2Heal race down 2nd Ave - 28 entries, women, (and men), sprinted their way to success and glory, with ‘Heel Patrol’ safely keeping all ankles injury free. More money raised with not a false start in sight. “The team is excited to develop this event and have the whole town involved.”

If people are not on a team, how do they get involved in Relay?
Just show up at the Fernie Secondary School (FSS) track, with some cash in hand, Saturday June 4, from 11am. You can buy food, massages, enter raffles, purchase a luminary for a loved one - joining in a Luminary Lap is a perfect way to acknowledge why you’re there and a poignant way to end your Relay for Life experience. As an individual, it’s an event you can be proud to attend and donate to, with not a moment wasted from your day out in the community. Every second counts and this event makes you realise why.

Cumulatively over the years, The Snow Sisters have raised just shy of $50,000. That is an unprecedented amount and an ever-growing total. After all, the ladies of Fernie count on them for at least one ‘stuff-strutting’ event a year. They hope to raise another $5,000 this year and perhaps you could help them to reach their total? Head to the FSS track on June 4 and look for the excitable women powering their way round the track. Just be careful if they’re wearing heels, it could get ugly…

For a full list of the ten ladies in question, check out FernieFix.com.

Unsung heroes is an acknowledgment of those guys and girls who carry out jobs that make our life in Fernie easier, cleaner, safer and FUN! Please email any suggestions to info@clarismedia.com.