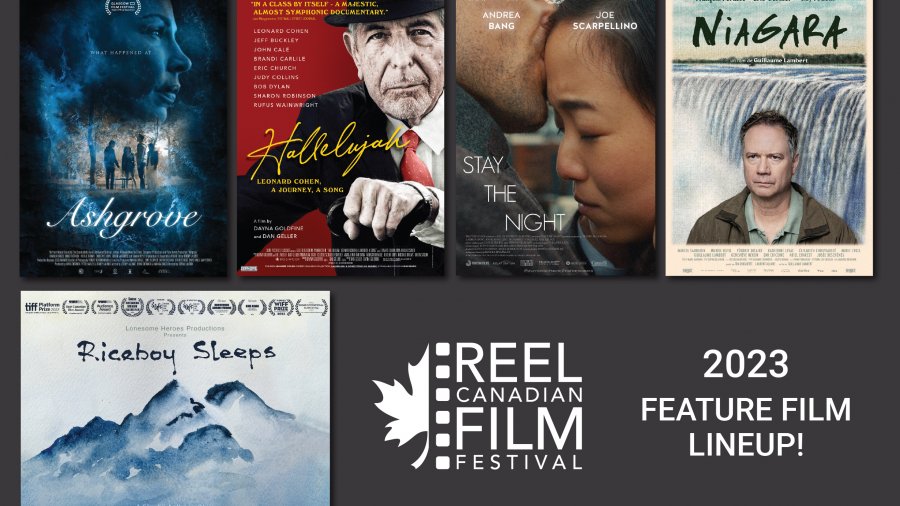 Early Bird festival passes are $65 and include the opening and closing receptions. Grab yours now, they are on sale for a limited time only. Visit fernielovesfilm.ca to purchase tickets and learn more about these five fabulous feature films!

REEL Canadian Film Festival takes place on the weekend of January 27-29, 2023 and celebrates the best in the Canadian film industry.

Stay the Night
After the reserved and chronically single Grace is passed over for an office promotion for being too standoffish, she goes out for a night on the town and meets Carter, who is at a crossroads in his career as a professional hockey player. In a move totally out of character, Grace instigates a one night stand with Carter, which quickly goes awry. The two end up walking and talking throughout the night, finding in each other possible solutions to the personal problems they face, bringing them together in ways they could not have predicted. Beautifully filmed under Toronto’s night lights, the movie explores the delicate and vulnerable act of revealing who you truly are to a complete stranger.

Hallelujah: Leonard Cohen, A Journey, A Song
This documentary explores the life of singer-songwriter Leonard Cohen as seen through the prism of his internationally renowned hymn, Hallelujah. Spanning decades of his life and work, Hallelujah traverses Leonard Cohen’s rise from a Canadian poet to an iconic musical artist. Cohen worked on the song Hallelujah for many years, and wrote dozens of verses, but his record label chose not to record it. The song only became a hit after being covered by numerous other artists. The film includes excerpts from Cohen’s personal notebooks, photographs, performance footage, and many interviews.

Niagara
Three brothers in their fifties struggle to overcome their considerable differences as they meet in Niagara Falls to bury their recently deceased father. Two of the brothers embark on a road trip from Montreal to Niagara Falls and along the way they bicker, relive old memories, party, and make new friends. They finally reach Niagara where they join the third brother, and learn of the circumstances surrounding the death of their irrepressible father. The film is a hysterical romp, as three very different brothers finally come together and recognize the importance of family.

Ashgrove
Set in the near future, Dr. Jennifer Ashgrove, one of the world’s eminent research scientists, is working frantically to find a cure to a crisis affecting the world’s water supply. With the weight of the world on her shoulders, her supervisor orders her to take a few days off, and she and her husband retreat to their country home in order to clear her mind. But their relationship is strained, and they come to realize that their ability to save their marriage may determine the fate of humankind itself.

Riceboy Sleeps
So-young, a South Korean immigrant and single mom, raises her young son Dong-hyun in Vancouver’s suburbs in the 1990s. At work, So-young battles loneliness and faces racist and sexist comments, while her young son is bullied at school. She wants to instill Dong-hyun with a sense of pride in his heritage, but as he becomes a teenager, he only wants to fit in as a ‘Canadian’. As they negotiate their separate circumstances, a rift grows between the mother and son. The film balances the very different perspectives of the boy and his mother, capturing her isolation and sacrifices, and his frustration about knowing nothing about his father, until an unwelcome piece of news sparks an unplanned trip to South Korea.