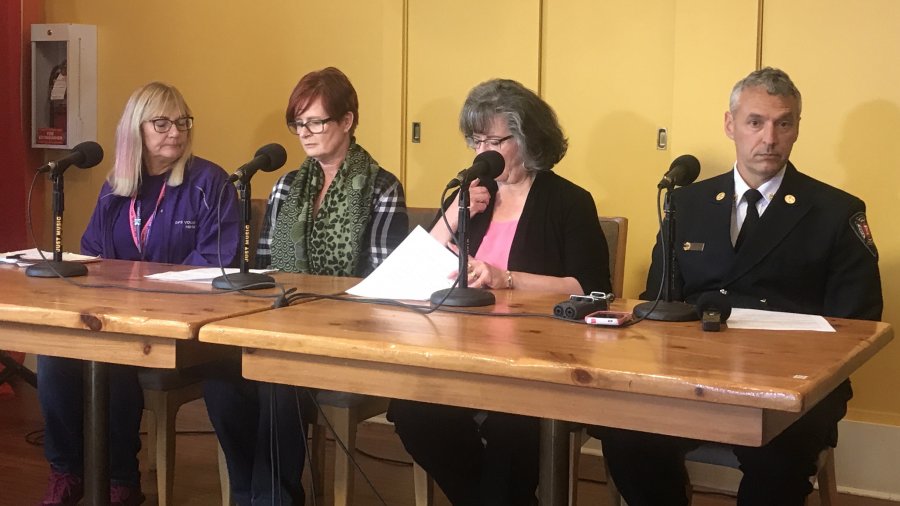 Today, October 20, 2017 at approximately 2:35pm the City held its fourth Press Conference at Red Tree Lodge. Before those speaking arrived, representative Loree Duczek informed the media that the speakers would be Fire Chief Ted Ruiter, Fernie Mayor Mary Giuliano, Karen Smith-Myles, sister to the City of Fernie's Director of Leisure Services who we lost on the 17th, and Cheryl McDougall, a member of the provincial Disaster Social Services team in Fernie offering their support to our community. Immediately, it felt different and emotions were in the air.

Fire Chief Ted Ruiter spoke first, as he was needed back on the scene. He started by saying that it is important for us to understand the struggle they are up against - hazardous materials demand a huge response and it takes time to make sure it is safe. "We can't rush this," he says. Then he continued to give us an update, that they have been working around the clock to ensure those evacuated can return home safely. Additional emergency response teams from Teck and Agrium have added important expertise to the team. The most important piece of news is the pressure vessel en route from Edmonton, which will draw ammonia from the system and sustain it in the vessel, allowing safe transfer. This vessel is due to arrive at 10pm tonight. He concluded by saying that there is an ammonia odour in the vicinity of the rink, but they are continually monitoring the levels to ensure people are safe. He also reiterated the importance of those evacuated to adhere to the evacuation order and boundary, and they will be providing updates as they continue.

Next, Mayor Mary Giuliano shared how difficult this week has been for everyone, and that there are no words to convey the sorrow that is being felt. Wayne Hornquist and Lloyd Smith were not only key members of the City of Fernie team, they were also members of our community and their loss is felt deeply.

Wayne was born and raised in Fernie, and began working with the City in 1992 in a position taking care of the parks. He moved on to become the arena's Chief Facilities officer. "He was someone who gave his all to his job and was respected by his crew," Mary said. When he was not busy in the rink, he could be seen proudly watching his daughter Stephanie figure skating. He used to say he was the best Zamboni driver around, as he was able to finish in one less lap than anyone else. "His daughters say they can confirm this," she tells us. Wayne was a family man, through and through. He loved spending time in the garden with his wife or in the park in Parkland Terrace, hiking with his two daughters instilling his love of adventure in them. He also loved to build, everything from boxes and frames for his daughters' degrees to items at the arena. This past summer, Mary was honoured to give Wayne a pin for his 25 years of service. "He was one of our go-to people, and he will be sorely missed."

Lloyd became the Director of Leisure Services on August 14, 2015 and has made a profound impact on our community since then. He has a strong passion and energy for project management and environmental and social sustainability. Lloyd was very proud of his staff and the organizations he was involved with. He was also committed to his job and to moving the City forward. Two of his favourite projects were making Canada's 150 a huge success, and the recent plans to redevelop Station Square. Lloyd loved adventure, which he passed on to his son. He was always eager to learn something new and continue to grow. His family says he was like a giant rolling stone, picking up everything along the way. "He will really be missed, not just by the staff but by the entire community," Mary said.

Jason Podloski was also connected to our community. He was specialized in the plant so was here often. "All of these people were fantastic people, and they will be missed," she concluded.

Next to speak was Lloyd's sister, Karen Smith-Myles. On behalf of Lloyd's family, she thanked everyone for the support they have received, and offered their condolences to the other families who lost loved ones and to the community of Fernie. "We are devastated by this loss," she said, but added that the outpour of support and love has comforted them. They especially appreciate the stories and anecdotes that have been shared. "Lloyd was a loving brother, a caring leader, and a proud father to a 13-year old son," she said. She then read a statement written by Lloyd's son:

"We can't express how difficult and sad this news is. He was loved by so many. We thank everyone for the kind words and know he has touched many people's lives."

Last to speak was Cheryl McDougall. This provincial team is made up of social workers and psychologists who volunteer their time to help those in need after a tragic event such as this has taken place. "We offer psycho-social first aid, and encourage you to come down to the College of the Rockies over the next few days," she said. You can also call 250-489-9677 for support, or get in touch with Jennifer Asselin at 250-423-1831 locally. "Grief isn't a 9-5 experience," Cheryl says, and then offered a 24hr provincial line to call at any time 250-310-6789.

She concluded by saying that they provide assistance with self-care, grief management, and debriefing our stories. "Sometimes if we keep this inside it doesn't go away. Whatever you are feeling is an absolutely normal feeling."

Somehow, it feels tougher today. More real. And I am probably not alone in these feelings. I hope all of you reading this who are feeling this way, are leaning on someone for support or are planning on heading down to the College of the Rockies. I was speaking with someone this morning, and they asked me to explain our community to them... I answered; every month when I ask the resident I am featuring what keeps them here the immediate answer is COMMUNITY! So many of our Fernie residents may have been lured here for other reasons, but they stay because of what is at the essence of our small and beautiful town. Stay strong, and united. We are all there for one another.