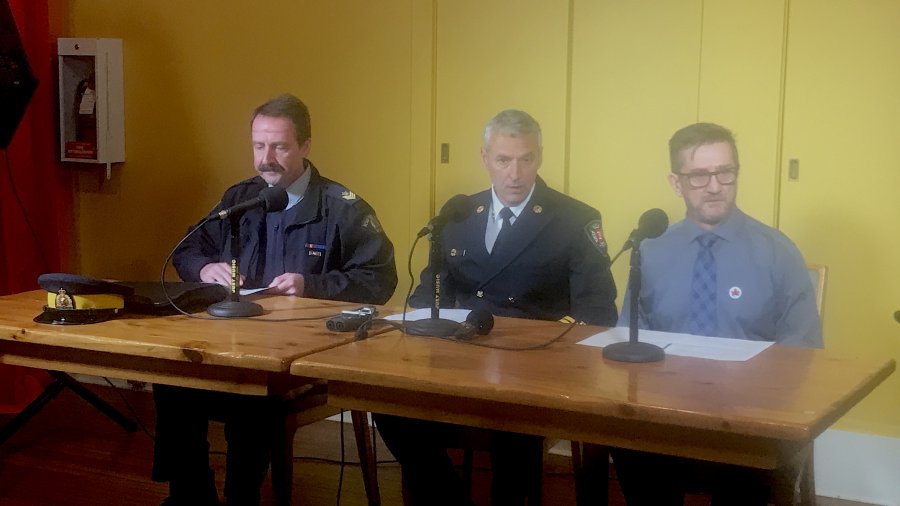 At 11:15am on October 19, 2017, the City of Fernie hosted its third conference to update the press on the ammonia leak at the Fernie Memorial Arena, that took three lives including two valued and loved employees at the City of Fernie and an employee of CIMCO Refrigeration.

Once again, no questions were allowed as the investigation and strategic planning to solve this issue are on-going. Speakers included RCMP Sgt Trevor Tribes, Fire Chief Ted Ruiter and City of Fernie CAO Norm McInnis.

First to speak was Sgt Tribes, stating that on Wednesday, October 18, 2017 the Elk Valley RCMP continued to work with Work Safe BC, the Coroner's Office, Interior Health, the Minister of Environment, and a hazardous materials company from Kelowna. He confirmed that the victims have been removed from inside the arena, and that they are preparing the scene for investigation to determine whether or not there is any criminal aspect. He closed by saying that those who have been evacuated or are in need of assistance can consult with the City of Fernie by calling their help line at 1-855-346-2188.

Next, Sgt Ted Ruiter addressed the crowd, saying that they worked through the night and at 11pm determined a recovery could start. It was decided that the main entry was the safest way for the response teams to access the building, to negate potential injury. A trial run was completed before recovery to ensure there were no barriers and that a safe run could take place. Once all response crews left the arena, it was left to the RCMP. This morning, teams met to continue to determine the best way to stabilize the situation. He confirmed the evacuation is still in place, and that it's their top priority to get people home safe. He reiterated that they need to understand what they are dealing with. Accommodation for those affected by the evacuation has been extended another day, and Sgt Ruiter closed by saying they will continue to keep them informed.

Lastly, Norm McInnis spoke. McInnis started by saying the RCMP is continuing its investigation, and once that is complete it will be passed off to Work Safe BC who the City will work with, as there are a lot of questions surrounding this event. At 4am on October 17, 2017, an alarm went off at the arena. The call was made to close the arena and to call in a specialist. "Something went terribly wrong from this time and when the 911 call was placed at 12:56pm," McInnis said. "This is what the investigation will be focused on." Yesterday, the City gathered staff to answer any questions and offer support. They have brought in a provincial team to support staff and members of the community in need.

"We lost two vital members of our team. CIMCO Refrigeration lost an employee as well, and we want to recognize that," McInnis said. He added that tomorrow, October 20, 2017 the City of Fernie is closing all operations to provide people time to process what has happened and grieve.

These individuals and many more from our community have been working diligently since 12:56pm on October 18, 2017. Many individuals in our community are asking how they can help. The Fernie Seniors Centre is offering a place to gather and eat for those who have been evacuated, and volunteers are always needed. Businesses have been very generous for those affected, offering food and beverages, a place to board animals and more. There will be continued ways to give back and lend a hand in the days, weeks and months to follow, as an event of this nature reaches all who reside in such a close knit town and takes time to get past. Our hearts are with the families affected, the staff at the City of Fernie and CIMCO Refrigeration grieving the loss of friends and co-workers, residents awaiting entry to their homes, and to those first responders and teams working to resolve this situation… whom we are also so very grateful for.