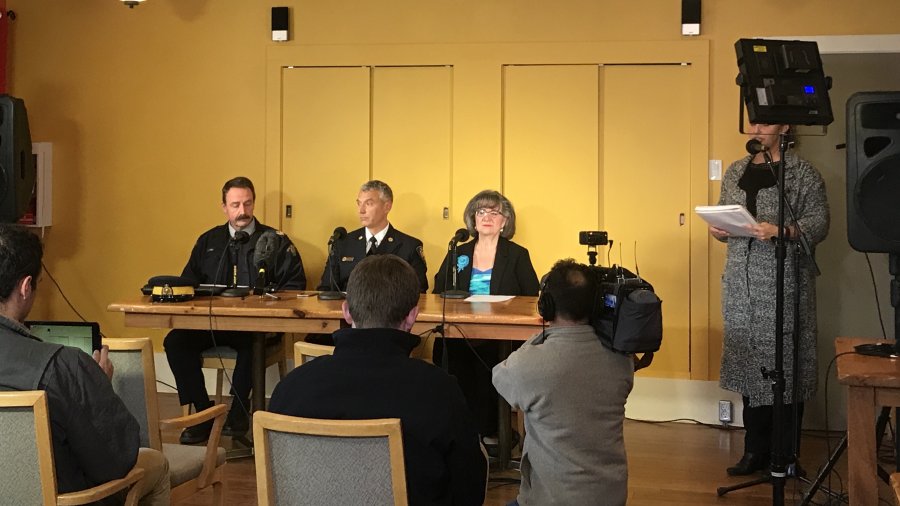 The last 24 hours in Fernie, BC have been heavy to say the least. At 11am on October 18, 2017, a press conference was held at the Red Tree Lodge where Sergeant Trevor Tribes, Fire Chief Ted Ruiter and Mayor Mary Giuliano all gave statements regarding an ammonia leak at the Fernie Memorial Arena, deaths of three individuals, ongoing investigation and work to safely contain said leak.

Sgt. Tribes spoke first, informing press from across the province that the RCMP have been involved since yesterday and will continue to be the lead agency until the investigation is concluded. They are working closely with Work Safe BC, and have been conducting an investigation to decide whether or not something criminal occurred. They have conducted witness interviews, spoken with specialists, and once the scene has been deemed safe, they will gather evidence to determine the outcome of a criminal investigation. Tribes added that next of kin have been notified, but at this time no names will be released. "We are only hours into this, there is a lot of work to continue to do," he stated.

Next, Fire Chief Ted Ruiter provided thorough information on how the situation unfolded from a first responders' perspective. At 12:56pm local time on October 17, 2017, Fernie's emergency response teams were called to the Memorial Arena for a medical assist as a result of a leak. When they arrived at the scene, they found a citizen performing CPR on an individual who had been exposed. BC ambulance took over, and the individual was transferred to the Elk Valley Hospital. Tragically, this individual was confirmed deceased.

Fire Rescue entered the facility, where two additional victims were found. Unfortunately crews had to exit the building because of the hazardous material. They then began to block the parameter of the building, and test the air around the building. The hazardous material was confirmed to be Anhydrous Ammonia, commonly used in arena refrigeration systems. Residents were then evacuated on 6th Ave from 13th street to 9th St, and Social Services set up at the Seniors Drop-in Centre.

On Wednesday morning, October 18, 2017, additional resources arrived from BC and Alberta including Work Safe BC, the Minister of Environment, and a Hazmat team from Calgary, AB to develop a plan to gain safe access to the building.

Ruiter closed by thanking the community and emergency personal for their support under these extremely difficult circumstances.

Lastly, Mayor Giuliano spoke. Giuliano first shared her deepest condolences to the families involved in this tragic event. "Sadly we lost three people, two who have been a part of the City of Fernie," she said. She continued by requesting the media and public respect the wishes of these families to keep the names private. Giuliano went on to inform the media that the City is arranging for support to be in place for these families, along with those involved from emergency services to City staff to help manage the grief they are dealing with. She concluded by thanking the emergency services, stating that their work, professionalism and way they have come together with provincial services has been outstanding.

The state of emergency in Fernie, BC is ongoing and the City of Fernie will continue to update the press and community as they receive more information. Follow the City of Fernie on Facebook for immediate press releases, or visit www.fernie.ca

Our sincere condolences for those who have lost loved ones, whether family, friend or co-worker and much gratitude to the City of Fernie staff and emergency responders.