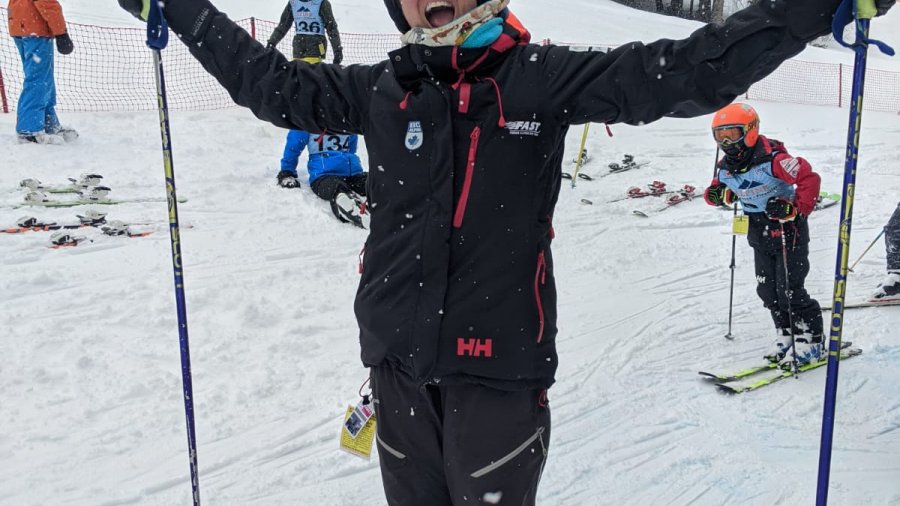 Cycling Without Age began in 2012 by Ole Kassow, who was interested in helping older people experience biking but was limited by their mobility. Through the use of the trishaw, he was able to begin offering free rides to nursing home residents in Copenhagen. From there it spread throughout Denmark, and since 2015 to 50 other countries.

Across the world, in our own little town an individual was thinking of creating something similar which led to a Cycling Without Age chapter in Fernie!

Melanie Wrigglesworth is originally from Northern Ontario but, “literally moved every 18 months and has lived everywhere in Ontario,” she tells me. “Until I was in grade ten and we moved to Calgary.” Mel’s dad worked for Shell, and while in Ontario she had a passion and interest in ski racing, it wasn’t possible. With the move to Calgary, Mel immediately got into racing out of Nakiska. She attended University, but as she was still racing and then coaching, “it took a really long time to finish! I started in 1994 and graduated in 2008.” With a Bachelor of Science in Geography, Mel was interested in GIS and satellite imagery and began working in that field. “I was surrounded by three screens and thought, ‘this sucks!’ so I changed jobs to train people how to use the software and enjoyed it much more!”

Mel and her husband Mike moved overseas for ten years, mainly in Lybia where Mike inspected leaks in water pipelines for the company he works for, Pure Technology. When the Civil War broke out in 2011, they moved back to Canada. “It was too dangerous,” and then to Turkey for a few more years until they decided to settle down in Canada. “We were in Calgary at first, but I got a job with the Fernie Alpine Ski Team and we were commuting all of the time. I said, ‘let’s just move to Fernie!’ Mike doesn’t have an office - he just needs a phone and an airport!” So, the family made the move in 2018. With Mel’s parents retired here, and her brother and his family here as well, Fernie is definitely home for the long-term.

Mel quickly became involved in the community through the ski team, running the U12 program, helping to organize the Ski Swap, getting involved in communications and newsletters, running dry land training and summer camps. “It’s such a great club to be a part of. While we still produce great athletes, we are inclusive and it’s like a big family.”

After living in the City, Mel wasn’t interested in driving her kids around so purchased a cargo bike. One evening, she was out with friends and gave one of them a lift home on the bike. She said, “Did you know they make these kinds of bikes to take seniors around?” and something clicked. Mel discovered the Cycling Without Age program, and touched base with a physio in town who was also keen to get involved, Lynn Ferguson. They had heard that another group had been working on something similar, who passed on all the work they had done. “They had a completely different approach, so it was super helpful,” Mel tells me. “I had most of the things I needed to be accepted as a chapter and through grants and a fundraiser, raised enough money to order a trishaw, and created a lot of awareness… and then COVID hit and we couldn’t take out any seniors.”

Mel shifted the focus to recruiting volunteers, creating a training program, and developing relationships with Rocky Mountain Village, Trinity Lodge, Fernie Family Housing and the Tom Uphill Home. They consulted with them to make the bikes safe for seniors, and in April of this year, they had their maiden voyage. “It’s amazing how many people took the course! We have 30 pilots who are fully trained and can take out eight people a day!”

Mel has always been passionate about inclusion, and knowing seniors have been locked away in homes, this was an opportunity to get them outside in nature and back into our community again.
“They have the wind in their hair and are so excited. One of our clients has been non-verbal the last year and a half. We were biking around the annex and she started freaking out, and the pilot – Shelly Moulton yelled, ‘she said she is having fun!’” Mel says, with tears in her eyes. “All of the staff at these homes say the seniors are so much happier and these rides give them something to look forward to.” The organization also calls seniors who live independently within our community to connect and offer rides, and while they have online booking many aren’t able to use it, so a lot of volunteer time goes into coordinating the clients and creating the schedule.

The weather is changing, and the goal is to go as long as possible. “We have a lot of cozy blankets,” Mel says. “Unfortunately, our two bikes are down and we’re waiting on parts from Denmark. Luckily, we fundraised enough this summer to put a deposit down on a third bike. We will definitely have enough demand next year to use all three!” Mel shares with me that Ian and the staff at Straightline have been extremely supportive, spending a lot of time figuring out the bikes and volunteering to complete monthly mechanical checks.

Fernie’s Cycling Without Age team dreams of expanding to support seniors in the Elkford, Sparwood and Tobacco Plains communities. For this they would need to purchase a trailer to allow them to transport the bikes. They are more invested than ever, having seen the positive effects this program has had on individuals who were the most isolated during the COVID-19 pandemic. They also see these rides as creating inter-generational opportunities and in future think this could be expanded to things like pairing seniors with youth and pre-school aged children in our community. “They were all like us at one point in time, it is so amazing to hear what they have to say and share,” Mel adds.

How can we help? “People can support by giving their time. We always need help with phoning seniors each week. And we need help fundraising!” If you are keen to volunteer or would like to donate directly online, visit cyclingwithoutagefernie.bike.

Thank you, Mel and the team at Cycling Without Age Fernie. It is such a joy seeing your trishaws around town and we look forward to seeing even more smiling faces and wind in hair in future!

1. When did you first arrive in the Valley and what brought you here?
We arrived in summer of 2018 and why wouldn’t you move here?

2. Who did you first meet?
Eden MacGregor

3. Do you remember your first general impression of Fernie?
There is a kindness filter in Fernie, everyone thinks about what they’re going to do and how they are going to treat others, because the likelihood of seeing that person again is quite high versus in the city.

4. What keeps you here?
All of the activities that are right outside our door. I couldn’t picture myself living anywhere else.

5. Do you have a favourite Fernie pastime?
Depends on the season, in winter for sure it’s Alpine or Nordic skiing and summer it’s biking. Anything fast!

6. What time of the year do you love most in Fernie, and why?
I love fall, because we just finished an amazing season of biking but it’s still going and everyone is pumped for winter and when it snows.

7. Where do you see or hope to see Fernie in five years?
No COVID! A more accessible community with a pathway system that no matter what kind of human powered thing you are using, you can access it.

8. How do you start your day or what is one of your daily rituals?
Waking up and going for a run with Eden.

9. Tell us something people might be surprised to learn about you.
I built a house for the first time and learned a whole bunch of new trades!