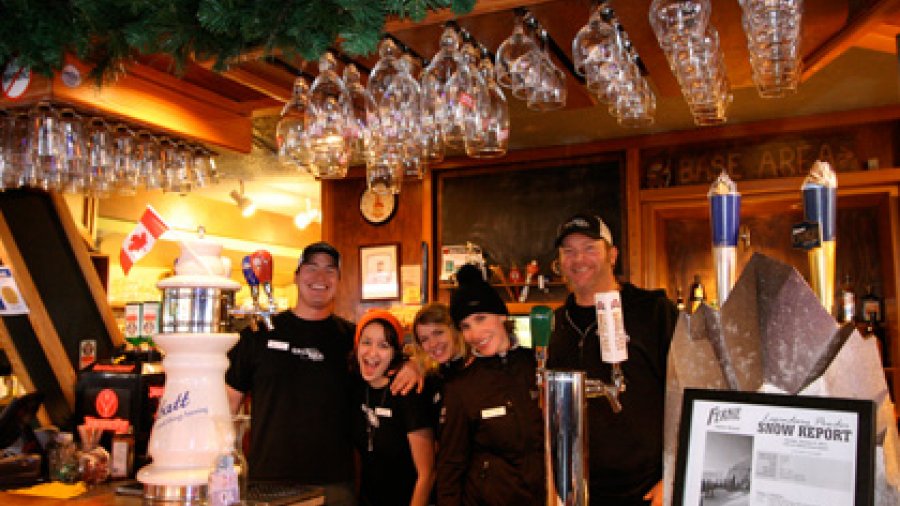 I’m not sure there’s anyone of legal bar attending age in Fernie who hasn’t stepped over the threshold of the infamous Griz Bar. Furthermore, I doubt anyone has ever left without a large smile on their face, whether from the ski boot stomping live tunes, or from devouring an excessive amount of nachos. Which is why, this month’s Unsung Heroes are the “faster than light, know what you want before you actually order” staff of Fernie Alpine Resort’s Griz Bar.

I popped in to grab myself a cold brew, stomp my ski boot and ask a few questions from the team. Here’s what they had to say…

A year of great snow means busy bars. How many members of staff is there this year?
“We have twelve front of house,” says Darcy, who leads the team of barmen, servers and nacho creating geniuses. And a fun team it is, with some familiar faces and some newer staff members this year who regardless of the chaos around them manage to get people fed, watered and entertained to perfection.

What’s the best thing about the Griz Bar?
“Apres on a powder day,” said with a massive smile on face. How can you not be happy for the beaming, rosy-cheeked masses as they deliriously stumble into the bar after a day of Fernie face shots? That and the increasing number of “live bands on the weekends” to bring in the crowds and bring out the real Griz atmosphere.

Best shift so far this season?
“New Year’s Eve this year was a great one, lots of fun and a great crowd,” says Marie, a nacho building connoisseur. But judging by the smiles that accompany the beer and sour cream slinging, it seems that every shift is pretty fun for the team.

What’s coming up this month a la Griz Bar?
Looking at the busy schedule of events, the biggest and best event at FAR as a whole is the Fernie Freeski Comp, culminating on the weekend of the 26 and 27 of February. The mountain turns into the scene of a world class ski movie, as competitors of a wide range of age and experience “huck their meat” as they say, in the hope of progressing onto the next day and the chance of making the final and (if weather permits) skiing the headwall. Last year was a great event and the après meat-hucking that takes place is pretty special. The Griz Bar of course hosts the awards, accompanied by live music and many beaming faces after a great few days of hard and impressive skiing.

Anything missing so far this season?
Said in unison, “Table sliding.” It seems the staff, customers and the table are all still waiting for this Griz Bar highlight. However it was noted that there are some rules to this sport. “It must be boy, girl, boy girl,” says the staff. “We don’t just want all boys,” says a smiling face with slight twinkle in her eye. “And no boxers,” says the same over-enthusiastic staff member. Point made. Any takers?

So there we have it – a team of enthusiastic, fast moving and big smiling staff, ready to serve a crowd of exhilarated, rosy cheeked and powder hungry customers.

And just remember, if you’ve a space in your diary and fancy ticking a Fernie activity with a difference off the list of things to accomplish this season, then get yourself and your freshly shaved legs to the Griz Bar on a Saturday around 4pm (if you like a crowd) and simply run, jump and slide…