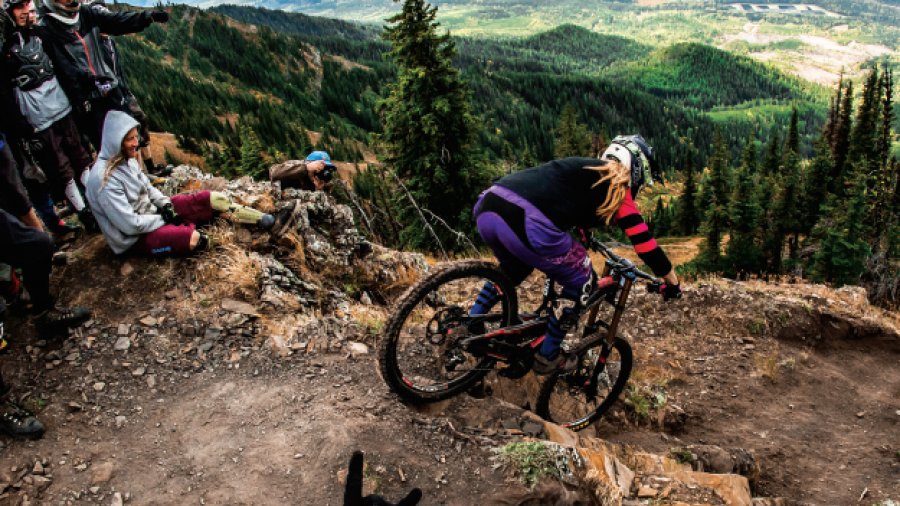 I remember sitting at my first World Cup Downhill race at Lake Louise. Emily Brydon was about to start, and I turned to her mom Rosemary who was already wearing a moose hat andwas pulling on a pair of extremely large sunglasses. It was a decoy. Rosemary could not watch as her daughter raced as fast as possible down a steep and challenging piece of sheer ice. And it was the sweetest thing, almost as sweet as the pair of them after Em’s successful run, looking into one another’s eyes and silently acknowledging the hard work, dedication and job well done.

I have never really considered myself an “adrenaline junky.” For the first thirty years of my life, I played it pretty safe. I wasn’t averse to change, but definitely avoided anything that made me uncomfortable. Emily was actually the first person to take me mountain biking, and I don’t think either of us knew how deeply I would be fall in love with it. Every time I hit the trails, I was faced with the uncomfortable and terrifying. And coming out the other side was exhilarating to say the least. After seeing the TransRockies finish in downtown Fernie, I thought… I am going to do that. I had only been riding a couple of months.

After racing a few years, I didn’t think anything could make me as nervous as the day and morning leading up to a start or give me as much of a rush as completing something I often doubted I could. I was so wrong.

This June, we took our four-year old daughter to the first of the Fernie Mountain Bike Club’s Little Critter races. I tried to call it an event to give it less weight, but was quickly corrected. “Actually Mom, it’s a race.” I was nervous and excited and happy that she wanted to participate. As the group of fourty or more kids took off, I could barely watch as she sped down hills, ricocheted off bushes and rocks and even took a spill with another rider who was trying to overtake her. With each obstacle, my stomach lurched. But her smile only grew. And when her name was called to collect her prize, the look of pride on her face filled me with so much joy I was glad of the sunglasses on my face. Man, was I proud.

Afterwards, I wondered how I will handle my girls pushing themselves and loving the adrenaline the mountains here can provide. And I immediately thought back to Rosemary at that World Cup race.Let’s just say I’m looking into a bigger pair of shades…

Welcome to Summer in Fernie, we hope you enjoy a healthy dose of adrenaline this July!