Jamming and a Blocking and a Little Skull Knocking 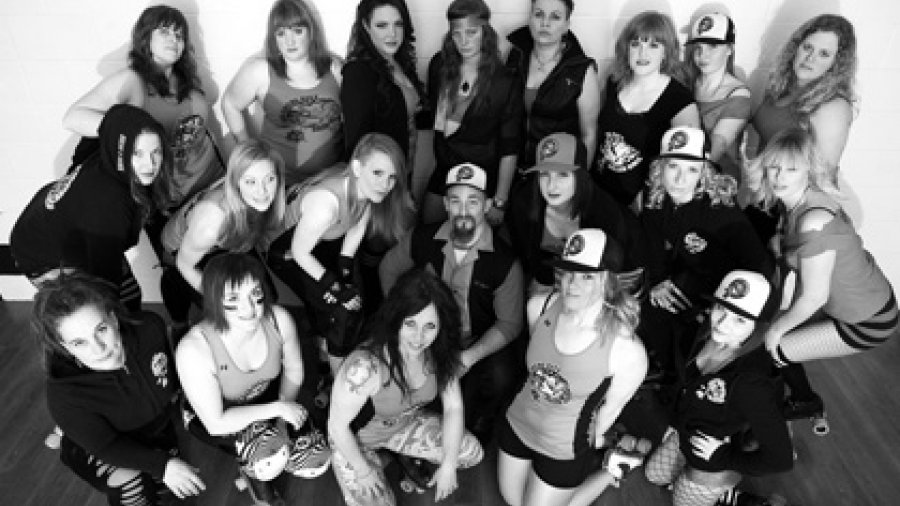 “Derby is a community,” someone once said. It’s hard to believe that roller derby has been in Fernie for just two short years; in that time, this wild, raucous, team sport has taken hold of the hearts and the souls of many of Fernie’s women and has the support of the entire city all the way from the Mayor down! Started by Lacey DD Daggers (all members play under a pseudonym, which often becomes part of their everyday life) the team is a place of support and friendship and energy like no other team you’re likely to see and a community is exactly what has formed. “Derby is an amazing opportunity to meet people you might not otherwise come into contact with, it’s such a fun challenge to form a team from such a diverse group of people” says co-captain Flash Fury. From the early days of training on the cold, draughty concrete of the Lion’s Shelter, they now have a solid team of over 20 women training at least twice a week under the watchful and dedicated eye of coach He-Whore. (It’s not clear if this is the coach’s real name or another pseudonym.)

The team has had a busy couple of years playing hard to help get the East Kootenay Roller Girls League off the ground; they have travelled to Las Vegas, Calgary and Couer d’Alene for events and regularly travel around the region to play against fellow league teams, four of which will travel to Fernie for the EKRD season opener bout on Saturday, May 11. The event kicks off at 4pm with the opening match between Kimberley’s Bavarian Barbarians and Creston’s Black Eyed Cherries, while Fernie’s own Avalanche City Roller girls hit the track at 6pm against Cranbrook’s Mountain Town Maulers. Invermere’s Killer Rollbots will also be present to help the event run without a hitch and for general crowd-stirring and beer-swilling duties. If you saw the ACRG take on the MTM at the Scrap to the Future last fall, you’ll know these girls are fierce and amazingly talented. It was a tough won battle last year and the ACRG are bound to want to maintain their title of being undefeated on home turf. Beverage gardens, concessions and a merch booth are also on the roster, and the team is very excited to include a scrimmage game for the BombSquad – Fernie’s junior roller derby squad. “It’s so much fun, I get to hang out with my friends and go roller skating – we laugh so much!” says Bomber SJ. This will be only the second match-up for these newest little rollers, so don’t miss this chance to cheer on Fernie’s wheel queens and encourage the newest recruits!

While the season opener will certainly be a Mountain Meltdown, it’s only a taste of things to come. Fernie has been honoured with the chance to host the Roller Derby Association of Canada’s Western Regional Finals on July 13-14. Expect over 400 people to descend on Fernie for this mega event – mark your calendars for the scorcher of the summer! For more info on any derby events, visit the ACRG website at fernierollerderby.com.

In other parts of town, the Fernie Golf and Country Club is in full swing in May following an early opportunity to hit the driving range in mid-April. With full course available in early May, the FGCC hosts several community based events including the Rotary Charity tournament on Saturday, May 11 in aid of Shelterbox, Fernie Children’s Festival and the Ghostrider Youth Camp. This grassroots event brings people together to raise funds for these valuable local and national organizations and foster community spirit. The event begins at 11am with a shotgun start and is followed by dinner, silent auction and prize ceremony. Download a registration form from the Facebook event page at Facebook.com/Fernierotarycharitygolftournament or call the pro shop on 250-423-7773.

*Title taken from the song “Roller Derby Saved My Soul” by Uncle Leon and the Alibis.