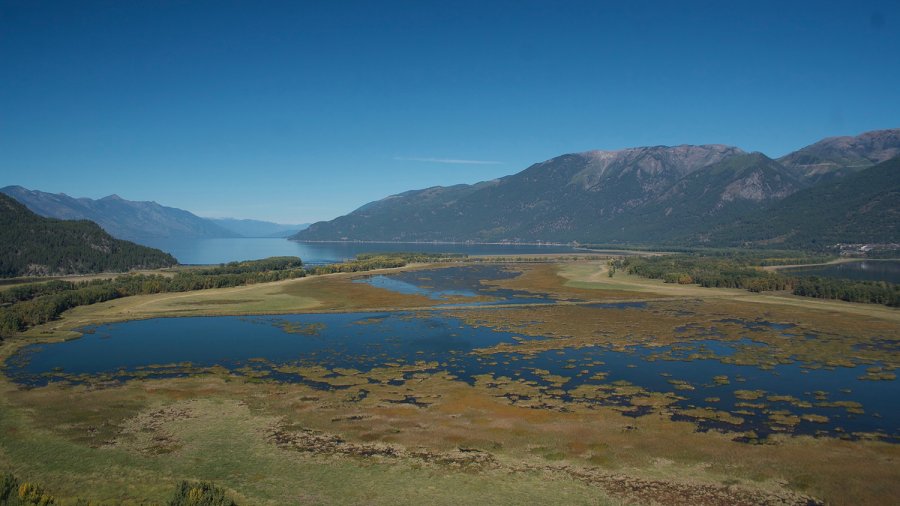 Five large-scale projects will be significantly improving ecosystem health in the Columbia Basin, bringing areas closer to their natural states and improving habitat for many species. The projects are being initiated and supported through Columbia Basin Trust’s (the Trust) Ecosystem Enhancement Program.

The projects will take place around Kootenay Lake and the Southern Rocky Mountain Trench. They will enhance and restore areas of alpine, forest and wetland habitat.

“Many Basin residents told us they would like the Trust to support larger scale habitat restoration across the Basin,” said Johnny Strilaeff, Columbia Basin Trust President and Chief Executive Officer. “These projects are going to involve meaningful and measurable on-the-ground work that will make a difference to Basin ecosystems.”

The Ecosystem Enhancement Program is a $10-million initiative to help maintain and improve ecological health and native biodiversity in a variety of ecosystems over five years. The Trust identifies projects by seeking input from community groups, First Nations representatives, government experts, and reviewing regional plans and research. The Trust will be seeking opportunities this fall for the Lower Columbia and Elk Valley regions. Learn more at ourtrust.org/ecosystems.

These five projects mark the first round of the program:

Bringing Back the Benefits of Fire—Without the Risks
After a century of fire suppression, the many forests in the East Kootenay are thick with dense stands of timber that compromise values for many species, and provide the potential for catastrophic wildfires. To return the stands to healthier, more natural conditions, the ʔaq̓am project will involve thinning forests and using prescribed burns on 1,300 hectares on ʔaq̓am reserve lands over the course of five years.

“This project will benefit elk, mule deer and white-tailed deer by directly improving ungulate range, as well as providing improved preferred habitat for multiple species at risk,” said Julie Couse, ʔaq̓am Director of Lands and Natural Resources. “The citizens of ʔaq̓am and area residents will also benefit from wildfire mitigation through the thinning of susceptible, volatile forests and the removal of ground fuels.”

A Grand Scale Wetland Restoration
Near Creston, Six Mile Slough provides habitat for waterfowl, amphibians and more. Its ecological value has been greatly reduced because of modifications to the wetland since the late 1800’s for agricultural and wildlife management purposes. This project by the Creston Valley Wildlife Management Area will see the modification structures removed, over 1,260 hectares restored to a more natural state and the slough reconnected to the Kootenay River.

“Improved flow of water, nutrients and other processes within the wetland and between the wetland and the Kootenay River will provide improved habitat for fish and wildlife,” said Marc-Andre Beaucher, Head of Conservation Programs, noting at-risk species like white sturgeon, burbot and northern leopard frogs will benefit. “This project will attempt to address sub-optimal water fluctuations, limit aggressive cattails encroaching upon the wetland, and return the area to a more natural hydrology that will benefit a wide range of species.”

Defeating the Deadly Rust
At home in the subalpine, whitebark pine is a long-lived tree species—except when its survival is being threatened by white pine blister rust. The Nature Conservancy of Canada and the Ktunaxa Nation are working together to help restore this endangered species that plays an important role in mountain ecosystems. Primary activities involve collecting seeds from uninfected trees, growing seedlings in greenhouses and planting them in the South Selkirk Mountains overlooking Kootenay Lake.

“This project will improve the long-term health of our subalpine ecosystems by increasing the likelihood that whitebark pine will survive on the landscape,” said Adrian Leslie, West Kootenay Project Manager, Nature Conservancy of Canada. “There will be increased numbers of healthy trees able to defend themselves from white pine blister rust, which will in turn support the dozens of wildlife species that rely on the large, nutritious seeds for their survival.”

Restoring Culturally Important Habitat
At the confluence of the Goat and Kootenay rivers near Creston, over 500 hectares of land make up part of the yaqan nukiy traditional hunting grounds. But this landscape isn’t as healthy and diverse as it used to be. Using aerial photographs from 1929 and the knowledge of Elders, the Lower Kootenay Band will be revitalizing wetland, stream and riparian habitats in this culturally and ecologically important area.

“This is a unique opportunity to restore an altered landscape to its former condition,” said Chief Jason Louie. “Major improvements will enhance the habitat for a diversity of fish and wildlife species, from white sturgeon to little brown bats. Culturally important plants including wapato, cattail, sedges and rushes will be returned to yaqan nukiy lands. It’s also a great opportunity to involve the students and staff of the Yaqan Nukiy School and all Lower Kootenay Band members in the project.”

“It’s a really special place in the entire Rocky Mountain Trench.” That’s how Richard Klafki of the Nature Conservancy of Canada (NCC) describes the grasslands in the Wycliffe Conservation Complex. Located between Kimberley and Cranbrook, the area is home to true grasslands, which are rare in the Basin. Historical activities on the landscape have led to less than optimal conditions for species in the area, ranging from elk, deer and badger to rare plant species. Through a partnership between NCC, the Nature Trust of British Columbia and the BC Ministry of Forests, Lands, Natural Resource Operations and Rural Development, the over 1,100 hectare area will be restored and enhanced to a more natural state. This will be done through activities like thinning the overgrown forests, riparian and wetland restoration, stream enhancement and removing invasive plants.

“Species at risk and the whole health of the grassland ecosystem will benefit immensely,” said Klafki, NCC Director, Canadian Rockies Program, mentioning species like Lewis’s woodpecker, Williamson sapsucker, badgers and wintering ungulates. “It is a sensitive ecosystem, and this project will help enhance its biodiversity values and wildlife habitat.”

Columbia Basin Trust supports the ideas and efforts of the people in the Columbia Basin. To learn more about the Trust’s programs and initiatives, and how it helps deliver social, economic and environmental benefits to the Basin, visit ourtrust.org or call 1.800.505.8998.