Apparently Kirsty Morris, the inventor and author of Unsung Heroes, thought I needed to start my day a little earlier. I wasn’t so sure, but agreed nonetheless to track down a Fernie Unsung Hero of the Street Cleaner variety. Or should I say Beautification Attendant. That’s how Adam McNaughton, a Fernie resident and dedicated sweeper, shovel’r and pick-er up’r describes himself and his vital role that he unfailingly performs here in the heart of Fernie.

If you’re a fan of the mornings, you may have spotted our currently solo Beautification Attendant from afar – orange tabard, large smile, quietly maneuvering his cart round the streets of Fernie. And whilst he’s doing his thing, he has one desire on his mind – “To make Fernie as beautiful as I can.” I for one thinks he’s hit the nail on the head. 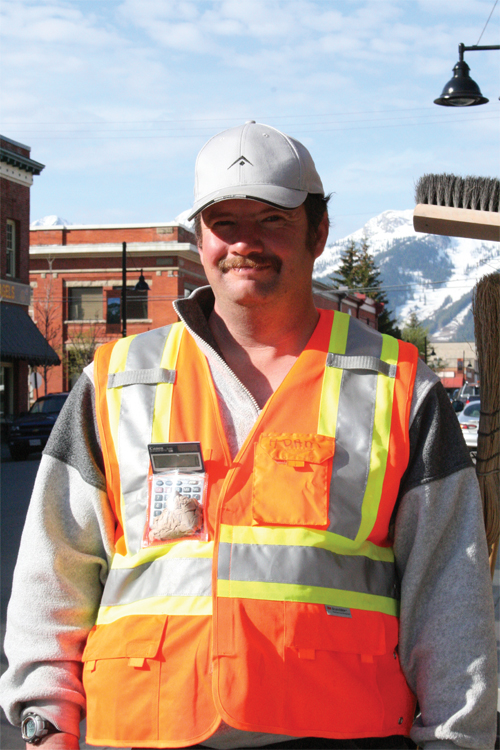 How long have you been beautifying the streets of Fernie?
“Since 1997. 7-11am Monday-Friday, April-September.” That is dedication. In fact Adam is so dedicated to the beauty of Fernie I doubt he’s ever missed a day, let alone a piece of garbage. Come September, depending on the temperatures, his schedule drops to one day a week, until his fingers can take it no more or the snow has started to descend on the valley – whichever gets there first.

What do you like best about the role?
“The praise from tourists and locals,” he says, “makes the job. That and getting to work outside in the fresh air and the views of the mountains.” It seems the Fernie Factor has got Adam too – unsurprisingly really as he’s the stereotypical Fernie early bird, seizing the best of the day and the invariable worm, all summer long.

What’s there not to like?
“I don’t like the rain or when it gets really cold.” And knowing the Fernie weather patterns, I can’t blame him one bit. Also, “gross things” – it seems there are often a few items Adam would prefer not to find. On asking what exactly, he said with a smile, “Just put gross things.” We’ll leave it at that.

Lastly, what changes would you like to see in Fernie and where do you see yourself?
“Sustainable living and more affordable housing.” Spot on. And, despite his seeming utmost contentment and love of his vital position, he says he’s always on the job search looking for “better pay and more opportunities” – typical Fernie all round I’d say.

So if you’re on the wander during those summer months, keep your eyes peeled for the orange tabard and say hi. It doesn’t take much to make his morning even better than it already is. Unless of course he’s found gross things.