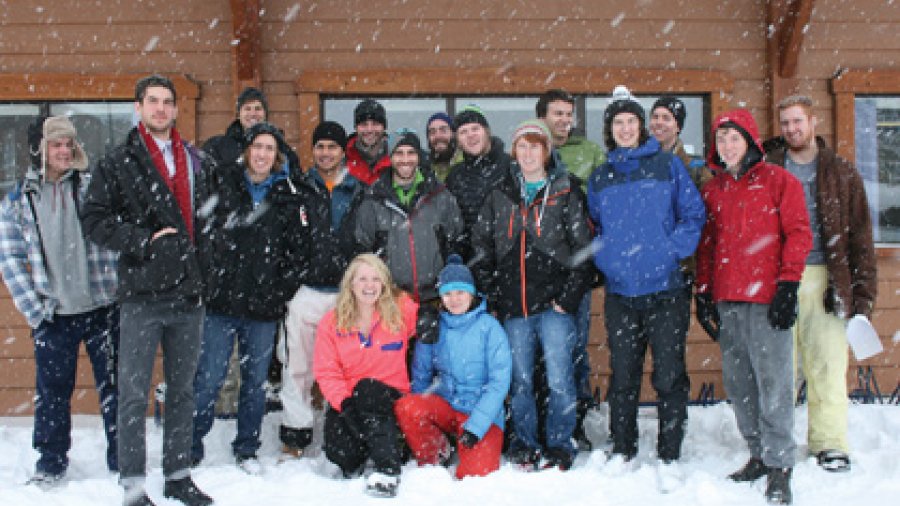 February. A month that resides between the cleanse enduring January and the vague glimpse of spring that is March. It’s a month of heavy snowfall, brighter mornings and a host of events to secure tickets to. This month’s Unsung Heroes focus is on one of the biggest events in Fernie’s winter calendar, which embraces the essence of our Fernie lifestyle, many a true Fernie’ite and some Fernie feel good times.

From February 23-25, prepare yourself for the Sixth Annual Fernie Mountain Film Festival, which has blossomed and developed over the past six years. One thing that hasn’t changed however is the involvement of the Mountain Adventure Skills Training Program (MAST) students, from the College of the Rockies. Under the experienced wing of Brian Bell, Festival Director along with Jon Turk, the MAST students help make the festival a great success, bringing man power, energy and unfailing enthusiasm. Speaking with Brian and two MAST students who have stepped up to join the committee this year, I learned more about what’s been and what’s to come…

How did it all begin?
The first FMFF in 2007 was a MAST project. Students, along with Jon and Brian “brainstormed the FMFF mission statement, which still stands strong today: Dedicated to filmmakers who spark awareness of mountain cultures, fragile environments and the passion and perseverance of global explorers.”

Since then, MAST students have taken on anything and everything, such as “sponsorship, advertising and distributing posters” ahead of the festival. On festival weekend, all MAST hands are on deck, as they “set up the community center – meticulously counting 300 chairs and getting them straight, helping set up screen, projector and sound, hanging recognizable prayer flags not to mention the important task of getting the beer on ice!” With three nights of films on the menu, “they also help run ticket sales and perform ‘bouncer’ duties if needed, clean up and tear down.” All with a smile.

What has changed over the years?
One thing that has been added is the Fernie Mountain Culture Award. “Introduced in 2010 to recognize long-time supporters of local mountain culture – trails, environmental stewardship, development and prowess in mountain sports, art and science,” this award is by online nomination and is awarded on the Saturday evening. Previous recipients have been Pat Gilmar and Heiko Socher, both deserving for their roles in our community. Many nominations come in each year, with different reasons and accolades.

Things have certainly developed in terms of the running of the festival itself – with audience numbers and the length of the festival – but certainly this festival has kept true to its roots, ensuring the small town charm, local support and vibe remains.

This year two MAST students decided to join the committee to ensure that they would be in on the action from the start. Speaking with Natalie Abey and Sam Williams, I learned about their experience.

What have you enjoyed so far?
“It has been great to be involved in the FMFF. Volunteering helps us interact with the local community in a way that would not have otherwise been possible and it is enjoyable to take part in the meetings and the decision making process. We are also learning from different people with different backgrounds and hopefully we are able to share some of our knowledge to help towards the festival committee.” That they certainly have done, bringing that bright-eyed enthusiastic quality to every meeting, despite being almost asleep on their feet from yet another amazing MAST adventure.

What roles have you taken on?
“So far, we have helped with the brainstorming of this year’s festival and offered ideas as to how to get the local community involved and acted as a go between with the MAST students.” And, as the festival fast approaches, “we both enjoy looking for and watching the potential films that we will be showing over the course of the three nights.” And as they correctly point out, “the 2012 festival promises to offer popcorn to the kids and alcohol to the adults, what more could you want?” They have a very good point.

I think it’s a given that regardless the changes and developments that FMFF sees in years to come, the small devoted committee along with the unfailing efforts of the MAST students is a winning combination, mixing experience with MAST’s unfailing adventure qualities. The Sixth Annual Fernie Mountain Film Festival “promises to show some truly interesting and thought provoking movies, about mankind’s abilities, perseverance, adventure seeking nature, astounding cinematography and a hint of ski-porn.”