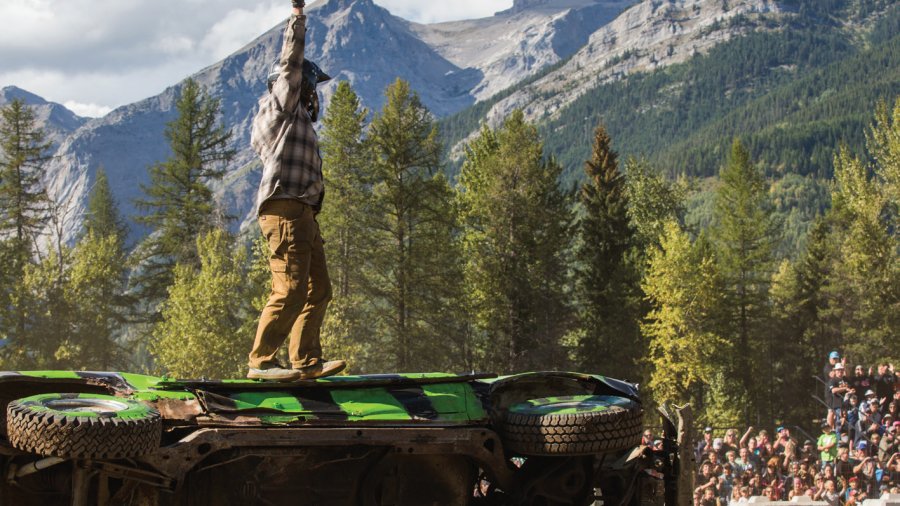 No one is sure how it started. A bet? A dispute over a woman? Two guys trying to prove who’s the top dog? Maybe it was a case of road rage. Instead of taking it outside, into the alley behind the bar, they took it to the county fairgrounds.

Whatever the roots, Demo Derby’s are a staple of rural Canadian life. In Fernie, the Lions Club originated and sponsored the Demo Derby for 45 years now. (Maybe more, but they can say 45 years for sure.)

The concept is simple. Put a bunch of stripped down cars in an arena. “Gentlemen, start your engines.” And the last one still running wins. Sort of a Gladiator on Wheels approach to driving. There are classes, so a VW Bug is not jousting with a Hummer. And there’s a Powder Puff division so the women can prove their mettle (metal?). Oh yeah, and there are trucks, too.

To enter, you don’t just drive up and pay your entry fee. The cars are stripped of all glass.  Additional reinforcement built into the passenger compartment. Seat belts are required. And so on. Full rules are available on Fernie Lions Derby Facebook page. It’s not as hard as it might seem.

While the day is a celebration of mechanical chance and driving skill (avoiding the most serious of the wrecks), the beginning of the Derby was to fund the charitable works of the Lions. Over the last 45 years the Lions have raised and distributed over $500,000 directly into the Fernie community.

This support is simple, like the BBQ’s they hold for the residents of the Tom Uphill Center and the Rocky Mountain Village. Or more complex, in providing support for athletic teams to compete around the province. Teams supported include the Ghostriders, the Fernie High School women’s volleyball team (to compete in Provincials in Vancouver), figure skating and the list continues with a host of other programs and events.

The notable aspect - all the Lions funds raised are spent in the community to support community members.

While the event’s beginnings are humble, the result created the beginning of vast opportunity for youth and community members in Fernie.

It’s a community event. Plenty of businesses close and use the Derby as a staff party day. It’s perhaps the biggest event of the year. And the beginning of a new year of giving for the Lions.

So, this year, head on down to the Derby. Bring the kids. Buy a hot dog. Buy a burger. Have a beer or two. Watch the mayhem. The crunch of steel. The crash of speeding iron. Anticipate the winners and the losers.

We’re all rednecks for one day.

And ICBC, you ain’t got no invitation to this party.