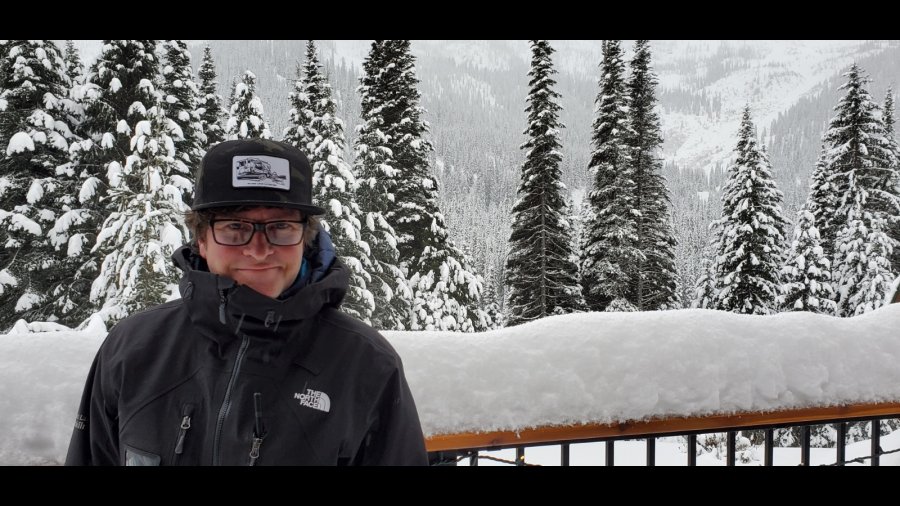 2020 has thrown everyone for a loop. Reinventing your business, learning to work from home, becoming a teacher to your kids… there is no wonder the word of the year is “pivot!”

Dave Morrison is no exception. This February he was hired as the new CEO of Island Lake Lodge and made the move back to the mountain town he fell in love with, something he has been working towards the majority of his life. While he likely thought the transition would be challenging, Dave could not have anticipated he would be reconfiguring a world-class resort operation during a global pandemic.

Dave grew up in Etobicoke, “in Toronto, I was a City kid and fell in love with skiing at a young age – it sinks its hooks in you,” he tells me over zoom. His first job at 15 was with a small private ski club, where he was able to build a skill set. “They threw everything at me, it was awesome,” Dave says. “I worked there through high school and University, and it was how I realized I wanted to be in the ski business.” Dave attended Waterloo, where he studied Recreation and Leisure Studies. “It was a Resort Management program. I still use a ton of what I learned in everyday life and am still in contact with my senior professors.”

If you know Dave, you know his best buddy is Kieran Summers who owns Giv’er Shirt Works. The two actually were assigned as roommates in residence. “We were unpacking our stuff, and I put up a Scott Schmidt poster, turned around and he’s putting up the same one! We hit it off right away, and have been best friends ever since,” Dave says.

In 1993, they came to Fernie for reading week. “I had heard about it through a buddy who I taught sailing with and convinced Kieran to come. It snowed a metre the week before, and a metre the week we were here. It was bottomless, and nobody was here. We hiked the Klingon rope and dropped into Curry, and left saying we are moving to Fernie!’

Working his way west, Dave had an interview at Mount Norquay and one with Heiko at Fernie Snow Valley. “Heiko was such a legendary, hands on guy. I could tell it would be special working for him and decided to move to Fernie. I was the lift operator and snow maker. Coming from Ontario, I had worked with pretty big snow making systems. Fernie had four snow guns…  it was a little different. I was used to 350.”

After Fernie Snow Valley, Dave went to work at Island Lake. “There was a lot of change going on, which was cool. They were formative years at the lodge, I made some good connections and gained knowledge.” From there, Dave went into the restaurant and bar industry, opening the popular Eldorado and Coal Train Restaurant with Matt Brazeau. “It was an incredible experience to bring it from the ground up.” After a few years, Dave took a step back and spent time just enjoying all Fernie has to offer. It was at this time the Crowsnest Pass was hiring a General Manager. “I was given total control to run Pass Powderkeg for the city, they trusted me to run it, provided a good budget and gave me the mandate to make it better. Which we did, it was nice to see it improve and grow. It became a really strong community feeder hill, bringing ‘never evers’ to the sport who progress to Castle or Fernie.”

Dave also began getting into the industry at a higher level, sitting on committees and making the move to the Canada West Ski Area Board, building a significant reputation for himself in the industry. After ten years running Pass Powderkeg, Dave was head hunted to run Mansfield Ski Club in Ontario, and while moving back east was not in his and his wife’s plan, it was an opportunity he couldn’t turn down. Not only did it allow them to reconnect with their families, it was a big operation when it came to numbers and provided a lot of value in learning the scope of the business. What they thought would be one or two years turned into seven! And Dave recognizes that it was this choice that helped him to make the move back to Fernie.

“In January of this year, I was head hunted for the CEO position at Island Lake. I went through the process and was hired in February, it was announced in March and I started in April,” he tells me. Was he excited? Well, yes but he says the process is massive and it’s all about fit.

“I was very happy that my skill set and ability was really relatable to what Island Lake Lodge was and where they wanted to go. And the best way to describe it is that it’s been fantastic. Despite the craziness of 2020 and COVID, Doug (Feely) had the company in great shape, I really inherited a business well-positioned, functioning well and it made sense to me how he was running it. COVID forced me to learn the business instantly, I was thrown into the deep end and with summer business coming on-line in June, we had to skate fast. Fortunately, we created a strong business plan, reinvented the business and the season was really successful – it was busy, ran well and we didn’t have issues. We got through it, kept everyone safe and we’re taking that momentum into the winter.”

The work Dave and his team accomplished this spring and summer is what allowed them to be so further ahead moving into winter. They have built a thorough winter plan and are ready to get people catskiing. When it comes to the future, Dave recognizes that there is a lot of opportunity at Island lake Lodge and is looking forward to the work ahead. “Expect the company to continue to evolve while staying true to what Island Lake is - a unique and special place. I see myself and the owner, Patrick sees himself as stewards of the land. We want to preserve it, deliver incredible experiences, and continue to be a valued member of the community – those things don’t change, just improve. These past nine months have been just incredible and I’m excited for a lot of years to come.”

1. When did you first arrive in the Valley and what brought you here?
1993 and we came for reading week and it was based on a friend’s recommendation, who I taught sailing with. Blown away. Left knowing we need to come back here.

2. Who did you first meet?
When we moved to town, we got here in the afternoon. It’s pouring rain in September, and back in 1995 there wasn’t anyone around. We found out the Royal was open and Darcy Richardson was the bartender. There was nobody in there, talked to him and he was friendly and welcoming. From day one he was one of our best friends, he still is and lives three doors down from me.

3. Do you remember your first general impression of Fernie?
I remember kind of sensory overload. The place was incredible, killer, undiscovered skiing with epic snow. Cool ski town with great people living an incredible life. Amazing, and still feels that way.

4. What keeps you here?
Probably everything I said in the last answer, although a bit busier now. Quality of life, abundance of activities, and also the people.

5. Do you have a favourite Fernie pastime?
From a memory perspective, back in 95 lapping Cedar Bowl on the Bear T-bar with nobody around and just… snow!

6. What time of the year do you love most in Fernie, and why?
That’s a hard one. I think for most people, we moved here for the skiing so initially always winter. And quickly we realized how great summers are but if I have to choose one it’s early fall… when it’s still warm, so colourful, the riding is epic, fishing is off the charts and the expectation of winter is right there.

7. Where do you hope to see Fernie in five years?
I really hope that it continues to be authentic, welcoming and inclusive… and let me be clear, I think it will be! I want it to be just as special for people who visit and move here as it was for me.

8. How do you start your day or what is one of your daily rituals?
That’s easy… first off, mandatory coffee. Then probably one on one time with my dog, Moe followed by the avalanche forecast in winter and in summer it’s weather and fire danger.

9. Tell us something people might be surprised to learn about you.
I worked as a radio producer for 680 CFTR in Toronto.

10. Quote to live by:
For this year - I’ve been asked a million times what we are doing this winter… my standard answer is “we’re going skiing.”  We should make a T-shirt. If only I knew a guy who made T-shirts…