Clearing the Streets of Fernie 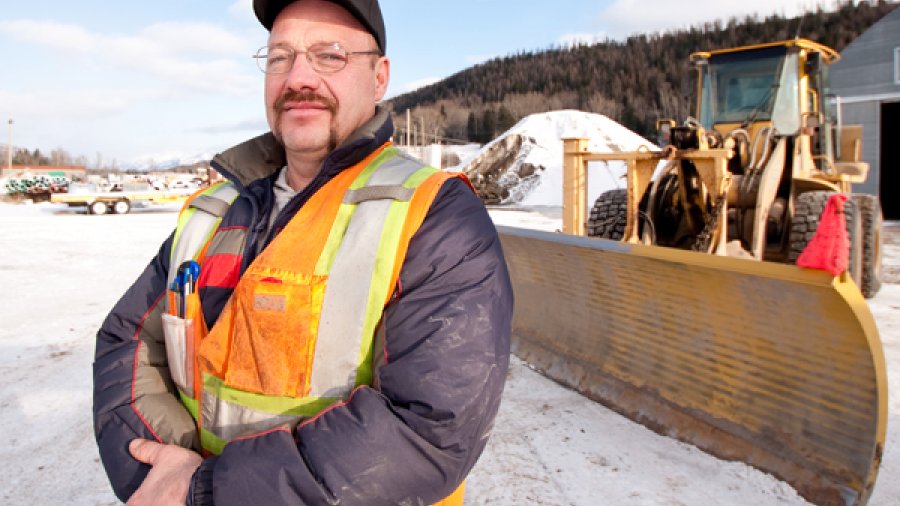 I’m lying in bed and it’s pitch black outside. I’ve been woken up by my Fernie winter alarm, which puts a smile on my face. That sweet sound of a bomb blast rattling the windows, which means it snowed last night and the patrollers are bombing the hill.

Then I heard a second sound that gets me out of bed. It’s the “beep….beep….beep” of a reversing snow plough. That’s my queue to get up because THAT means it snowed a lot and if I want to get first tracks I’ve got some shoveling to do before I can get up to the hill.

The team at Fernie City Operations department does an extraordinary job in the winter. When it snows it takes six teams of snow ploughers 12 hours to clear the roads of Fernie. Every time it snows more than 10cms in town they are out at work at 4am and keep going until their work is done, around 4pm.

And if it keeps snowing they keep ploughing. When us skiers are in ecstasy at days of heavy snowfall that means back-to-back 12hr shifts for a snow plough operator.

Talking with Mike Sevinski it’s clear he loves his job. He’s been working for the City for 28 years and has ploughed these roads for the last 18 winters. When I asked him how he feels when it snows for days he said, “I love it! I still get excited and the adrenaline keeps me going for my shift”.

“I usually get up at 3am, with my shift starting at 4am. It’s dark outside, snowing, the wind’s blowing and it’s white out because no one has been up and down the streets. There’s all kinds of obstacles to watch for – vehicles left abandoned on hills and cars on the street.

Fernie wakes up at about 6am and once people start moving around our job becomes more difficult. The orange flashing light seems to act like a people magnet and when you’ve got heavy machinery working hard you have to be really aware of what’s going on around you.”

You don’t appreciate just how large a snow plough really is until you see one up close. They are big, heavy vehicles with limited visibility and are difficult to maneuver. Remember they take longer to stop than the average car. The plough blade is 12ft long and when a driver is trying to concentrate on ploughing a street it’s hard to keep an eye on pedestrians and vehicles around them.

There is an art to snow ploughing. The City has six ploughs on set routes to clear the commercial areas, schools and emergency service areas first and then move into residential areas. The most impressive operation is on Main Street, where snow is banked into the middle of the road and a snow-blower runs behind a truck to remove the snow from the street altogether. Streets gets passed three times to clear them of snow and Mike makes sure he works in opposite directions every new snowfall to ensure the snow banks don’t build up unevenly.

“When the snows falling you can’t go back that day to clean up, there’s no time. So if I have a car in my way and have to drive round I can’t get back to clean it up that day. But when the snow stops we use that time to go back and tidy up the streets in preparation for the next snowfall.”

Talking with the operators I learnt a thing or two, including a new word – windrow. And while that might not be what I’ve been calling it we all know what it is. It’s the dreaded ridge of snow that’s blocking our drive after a snow plough has been past.

I have a new found respect for the snow ploughers of Fernie. Now when I get home from skiing and there’s snow on the drive I just remember to be grateful that it’s just a small patch to clear and not the whole street!

If I could wave a magic wand to help these guys I would ask that we remember to:
- obey parking restrictions and move our cars off the street so they can plough
- try and avoid walking or driving near a snow plough at work
- don’t take the ‘windrow’ personally

And remember, if you’re over 65 years of age or disabled you can now register with the City to have your ‘windrow’ removed for you. And please remember that Mario is a one-man team who has the whole of Fernie to cover, so it might take him a while to get to you – but he will!