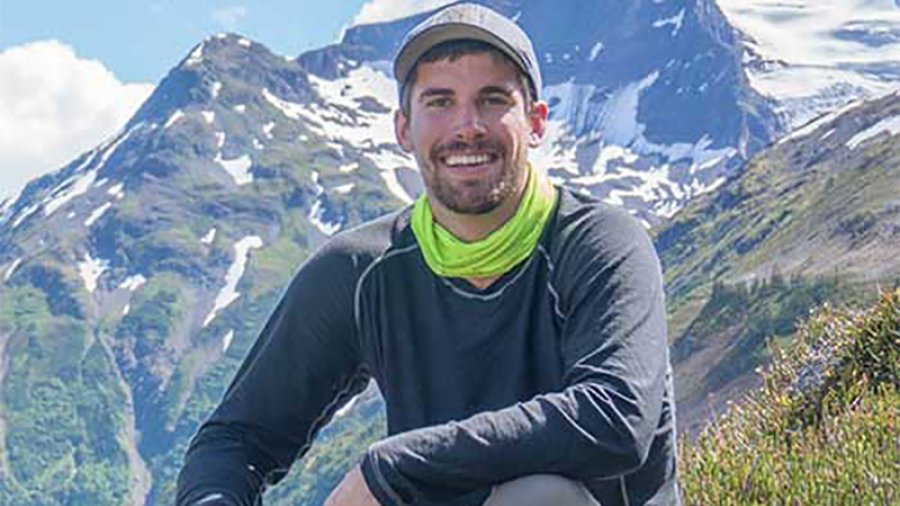 A few years ago, I saw pictures of Ange Qualizza (now the Mayor of Fernie) and her daughters out in the woods, picking grizzly hair off trees. “What the heck is going on?” I thought.  “Why are they collecting grizzly bear hair and how is it on the trees?” This is when I discovered the South Rockies Grizzly Bear Project.

This project began in 2006 - a time when Grizzly populations were increasingly of concern and more data was needed to better protect these animals and also to arm us with the knowledge and understanding to implement any necessary changes. Enter Clayton Lamb, who facilitated this project starting in 2013.

Originally from Chilliwack, BC, Clayton grew up “hunting and fishing and trapping,” he tells me. “My parents were teachers, so we spent our summers out on the landscape.” Not surprisingly, when he attended UBC’s Okanagan campus, he went into sciences and studied ecology. “Then I went to Oregon and worked on Mount Hood and sampled Pika, collecting hair. For Pika, we just had to use packing tape and create a tube and they would leave their hair on it. I went from something tiny to a huge bear, using barbwire on trees.”

Clayton continued his studies at the University of Alberta in Edmonton, completing a masters and transferring directly into a doctoral program. It was at this time he was running the South Rockies Grizzly Bear Project. “I felt like I was just scratching the surface and really liked my lifestyle. I wanted to learn more about the Elk Valley and BC, so I just kept going. That’s when it went from the Elk Valley scale to province wide,” Clayton says. One of the things he noticed through this project and his studies is that it was difficult to decipher from the hair the cause of death, which is when they began the collar project. “We have collared 55 bears between Elko and Elkford. This tells us what individual bears do, where they are, how they die. Every spring we fly over to see if they have cubs/still have cubs. We learn a lot abut the animals.” Especially when combined with the genetic data the hair collecting provides - giving them the big picture! For example, they have found that grizzly bear deaths on the road or railway are rarely reported. Clayton learns this the hard way, by going to the site and discovering their passing.

Starting out, Clayton would spend the summer and fall in the Valley… then he added spring. “I was only spending a few months of the year in Edmonton… and the worst months! So by 2017, I moved here for good.” Up until six months ago, his focus was on “grizzly bear stuff ” but now he has secured a fellowship conducting post doctoral research with UBC to study Caribou. “This is conservation work, learning how to translate science into action,” he shares. “It’s the application side of it, and not letting the science end with the journal article. How can we turn it into something meaningful?” He began studying the herds in the Peace region, which were plummeting. “There were only 36 in the herd in 2016, and the First Nations decided to take action as the neighbouring population had just gone to zero. They conducted an aggressive campaign, and now there are 88 of them,” Clayton says. “I’m the science side, weaving indigenous knowledge with western science to bring the story to light in an academic way.”

While Clayton is now predominantly working on Caribou, he shares that he continues to work on grizzly bears, “on the side, because it never really ends.” Most recently, this has involved working with
a group of individuals and organizations on safe animal crossings. “This is one of the most fun projects of my career. It’s a win-win. We’re not asking anyone to make a compromise to allow wildlife to exist. Everyone wants to travel on the highway safely, and we want animals to get across safely. It’s an easy sell, safe for people and wildlife!” The first phase is from Hosmer to the Alberta Border along Highway
3, with the goal to reduce or eliminate animal collisions. “Elsewhere, they have been reduced by 80-90%,” he says, and I am shocked! But then he shares that between the crossings it is totally fenced. “The idea is to use existing structures and create access to the great walkways beneath them, along the river the bridges traverse,” Clayton says. They are also planning one overpass, which are “effective but expensive,” over the Alexander drainage just after Sparwood.

“This is a busy spot. Between Hosmer and the border, 200 large mammals are hit every year,” he says adding that when you estimate the cumulative costs of these accidents it’s roughly $3 million on this stretch alone. “It creates a good business case, it’s actually cheaper to do something.” Like Clayton mentioned earlier, truly a win-win preventative measure for all involved. “This is a good step towards using technology and advancements to coexist with wildlife in the Valley.” Clayton’s work is increasingly recognized and appreciated by residents in the Valley, and this project is an exciting move forward for us. He admits to loving life and the community here, but also recognizes that his research may take him elsewhere in future. But for now, he is happy calling Fernie home and says he’ll always keep his place here as he knows he’ll want to come back. “It’s an interesting place to live,” he tells me, adding that he feels privileged to work on these projects from here.

“Working on conserving Caribou in BC is one of the greatest conservation projects in the province and in Canada. It’s the next big challenge, and one I won’t probably solve myself.”
Well, we think differently Clayton! Thanks for all you have and continue to do for wildlife in our area.

Keen to take part in the South Rockies Grizzly Bear Project? Visit grizzlyresearch.ca. Go for a hike, have an adventure, and you might even get a cool hat!

1. When did you first arrive in the Valley and what brought you here?
I arrived in 2013 and I came to collect grizzly bear hair.

2. Who did you first meet?
One of the first people I met was Bill Hanlon. I lost power to my RV and had to plug into his barn… and ended up living in his house all summer after that and his family kind of adopted me.
3. Do you remember your first general impression of Fernie?

That was a long time ago now. I had been all over BC, the most remote places and had never been to the East Kootenays. I think that I was sort of like amazed at all of the opportunities… I couldn’t choose what I wanted to do. Fish the Michel, learn to mountain bike, hike Heiko’s trail. I was at a loss every day.

4. What keeps you here?
I think the landscape for sure. Every morning I wake up and have a coffee looking at the Lizard Range. And, the different types of ways we can enjoy the landscape here. Fishing, hiking, hunting, skiing. And I really like the people here. For someone who hasn’t been here for very long, I feel a part of the community and I like the way the community comes together.

5. Do you have a favourite Fernie pastime?
I think it’s to ski… to ski powder.

6. What time of the year do you love most in Fernie, and why?
I like the fall. Which doesn’t overlap with my favourite activities, but I love seeing the valley in its peak golden phase. And I’m excited for winter to come. It’s a slow period and we can breathe for a second… it’s a little less chaotic and beautiful.

7. Where do you see or hope to see Fernie in five years?
I think that Fernie is working to develop a sustainable and responsible tourism industry and that seems to be bringing the valley to the spotlight at a multi-provincial level. And that’s exciting - it’s on a good trajectory. And then I guess broadly, looking beyond Fernie, the Hosmer to Alberta highway project will provide a safer connection for our neighbours and for those of us who travel that way.

8. How do you start your day or what is one of your daily rituals?
Just before COVID hit, I bought an espresso machine off the Fernie market place and it was the best investment, as I have a latte every morning.

9. Tell us something people might be surprised to learn about you.
I used to run a log furniture business, and build handmade log furniture when I was younger!

10. Quote to live by:  A ship in harbour is safe, but that is not what ships are built for.
- John Augustus Shedd