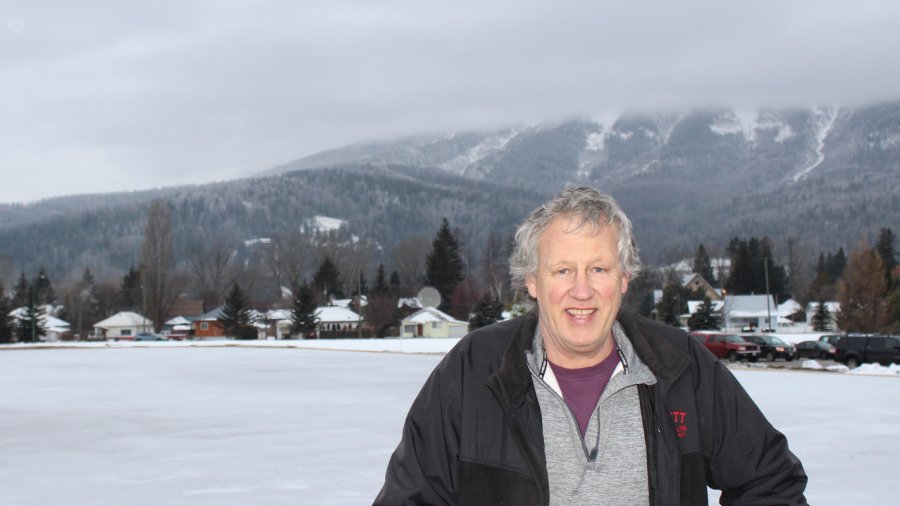 This fall, the community of Fernie suffered a tremendous loss. News of a tragic accident at the Memorial Arena resulting in the loss of three beloved individuals stunned residents and spread across the nation. Through the heartache, there was also a palpable feeling in the air… everyone wanted to reach out and help in any way possible, but many didn’t know how.

On November 27, 2017 Chuck Shoesmith of the Fernie Lions Club alongside Jocelyn Sombrowski, chairperson of the City of Fernie Leisure Services Advisory Board presented a proposal at the Committee of the Whole meeting for an outdoor rink.

“It was really strange how it all started, at a Lion’s Club meeting we were looking for new things for the Club to take on,” Chuck tells me over coffee and carrot cake at Freshies. “We decided we should get a rink going and started talking about locations and getting permission from the City. A Lion’s member happened to be atCity Hall spoke to the CAO Norm McInnis who told him we just got a call from the Calgary Flames wanting to donate a set of boards and it will cost $60,000 to set them up. Next thing you know, Norm and I are driving around looking for sites.” Having decided on the land adjacent to the Aquatic Centre, an ad hoc meeting with potential stakeholders took place, which is where Chuck stood up to take on project management knowing his experience in building would be an asset.

They went to the following council meeting, the Committee of the Whole on Monday morning. “Once we got the go ahead to start on the land, I called a friend at Mitchell Excavating and they were mobilized and starting work by 1pm the same day,” he says.

It’s so interesting, sitting with Chuck and his wife going over all of the details on this amazing community initiative… like it’s just another day at the rodeo. I’ve heard of Chuck, having grown up in Fernie I’ve ran by his property countless times, admiring his land and views. I’ve watched the projects his company Shoesmith Construction Ltd. has completed in the Valley. But I never really knew much about him, personally.

Chuck came to Fernie in 1977. Having grown up on the Lower Mainland, he was on his way to Alberta to look for work. “I stopped here to see some friends, got a job I wasn’t looking for, and stayed,” he tells me. Working mainly as a carpenter all of his life, he started his own company. “It was the only way I could get paid fairly, and as an entrepreneur to the core I liked the challenge of the work.” In 1988, Chuck bought a large parcel of property on Burma Road for his family. “It’s awesome, so private. We needed a four-wheel drive vehicle to get there some times, and the wildlife! The interaction between the moose and kids was unbelievable.”

While busy with family and running a business, Chuck was also heavily involved with the Fernie Lion’s Club. “It’s all about volunteerism – to serve,” he tells me, and I learn about all of the great ways this organization helps our community and the families in need within it. Organizing events like the Demolition Derby, a Fernie staple, and hosting BBQ’s for seniors and kids’ events such as the Kikomun run, the Club generates $40,000 a year. “Being able to give away that kind of money in the town makes you feel good. When someone comes to ask you for something, it’s always there.”

When discussing their interest in the outdoor rink, he immediately says, “there was a need in town, why shouldn’t we do it? That’s what we do – we serve the public.” And they sure have! In collaboration with the City of Fernie, the Calgary Flames Foundation and countless others, the project was completed on December 21, 2017 with an official opening celebration. “It’s a feel good story,” he says. “We can come away from this with positivity.” One thing Chuck can’t stress enough is the willingness for people to get involved – whether donating time, machinery, materials, or even bringing food for those working on the rink, “nobody said they wouldn’t help,” and in fact people have been coming on their own to see how they can lend a hand.

The following day, I meet Chuck at the rink where he confirms that donations to date has been nearly $250,000. It’s been just over two weeks since the project began, and the rink is ready for skating, the shed for equipment and the Zamboni nearly complete, and the boards arriving tomorrow. Stands are in place, poles ready for lights, and the views unreal. I’m in complete awe. The community has come together and created a space to come together. A place we can play and laugh. Feel gratitude for the hard work and generosity of those who have made this happen. And remember those we have lost. “They would have been here, helping,” says Chuck. And we both look out over the ice, both imagining them right there, doing what they love for the town of Fernie.

A full list of volunteers and donators will be posted on FernieFix.com. As you can imagine, it’s rather extensive. Thank you, Chuck, the Calgary Flames, City of Fernie and everyone else involved. You have really brightened up our New Year.

1. When did you first arrive in Fernie and what brought you here? 1977 and I was on my way to Alberta looking for work.

2. Where did you first live in town? Right across from the College, a warehouse on 3rd Ave. Stayed in there for awhile until I got caught and thrown out. That’s the truth.

3. What was your first impression? Fernie was such a dump with a lot of bars. It was pretty run down back then.

5. Do you have a favourite Fernie memory? I really like to go out on the point in winter between the Wigwam and Ram Creek and look over the valley there.

6. What is your favourite time of the year in Fernie and why? I like the summer, it’s warm and there doesn’t seem to be any bugs or mosquitos. A nice place to be outside.

7. Where do you see Fernie in 5 to 10 years? Well I would like it to stay just as it is. But it will grow and we’ll have more services and amenities and more people, and more enjoyment I guess.

8. How do you start your day or what is one of your daily rituals? Have coffee in the office with my wife, and answer emails. In the summer time we sit outside and watch the sun come up, every day and have our coffee outside.

9. Tell us something people might be surprised to learn about you. I used to have long hair, ha I don’t know - I’m a pretty open guy. My life has changed a lot since I got these crutches,especially how I feel about myself. I’m still recovering from a scuba diving accident, which caused nerve damage… and nerves grow forever so I’m still getting better.

10. Quote to live by: Don’t waste your time worrying about stuff.