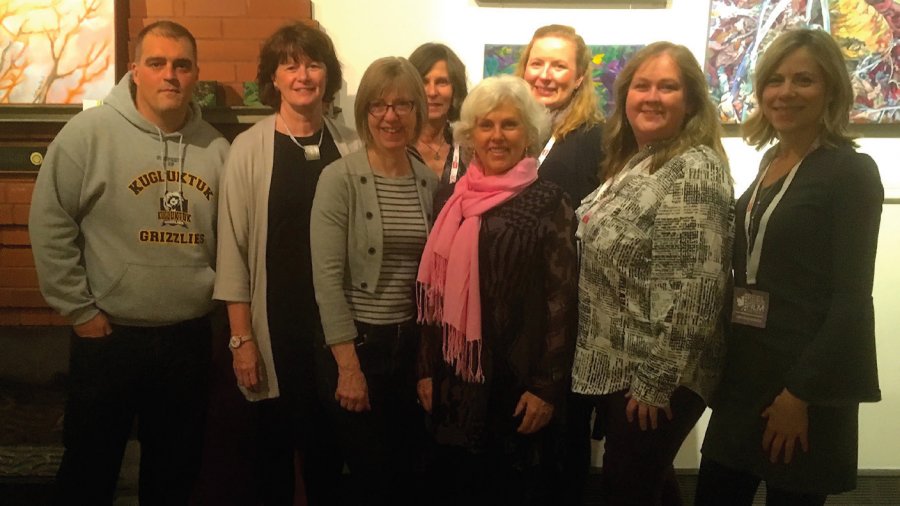 Around 12 years ago, at a booth in the Brickhouse with the committee of Indie Films Fernie, Carolyn Nikodym suggested that our little group should consider putting on a film festival. Of course, we had many reservations – Will people come? What would we show? How will we get special guests to turn up? But the enthusiasm was there, and after more than a year of planning, procrastinating, and pre-screening, we set the date for the first Reel Canadian Film Festival – March 27-29, 2009. Over the years, feminist themes have featured strongly – from the angst-ridden Mothers and Daughters and the explosive Incendies in the early years to heartwarming comedies including Cloudburst and Gabrielle. We’ve been fortunate to welcome Canadian film-makers Su-An Ng, Miriam Needoba and Emma Grabinsky, actor Siobhan Williams, and the inimitable, unstoppable Leo-award-winning Florence Barrett.

The 11th annual festival was held on January 26-28 this year. The opening night feature – The Grizzlies – by first-time feature director Miranda de Pencier was a massive hit. We were thrilled to welcome Russ Sheppard to Fernie to discuss his real-life experiences in Kuglugtuk, but it was young student Miranda who really stole the show. As tragedy and triumph unfold around her, stoic Miranda is a force for good in the town, helping Russ find his feet and supporting the fledgling lacrosse team that is central to the film’s narrative. As we found out at the Q&A with Russ following the screening, the real-life ‘Miranda’ is even more impressive. Emerald McDonald became an advocate for social change in high school in 2007 when she helped lead around 200 students to enact liquor restrictions and regain control of a town devastated by alcohol abuse. This is what feminism is to me; empowering young women to choose their own destiny and working towards a world where everyone can thrive.

Also featured at the festival was The Woman Who Loves Giraffes, the story of Anne Innis Dagg, a pioneer of giraffology and a passionate feminist. Denied tenure for being a married woman, she fought years of misogyny, sexism and job insecurity. One week later at a satellite screening in Sparwood, La Bolduc told the story of Mary Rose-Anne Bolduc, a Quebec musician who rose to fame in the 1930s with her lively renditions of witty folk tunes. The film focuses on her music career but is shaped by the personal challenges she faced with her incredible spirit and strength of character.

Although the festival doesn’t have a mission to feature feminist movies (the aim is to celebrate the excellence of the Canadian Film Industry in all its forms) these films have a natural resonance and are always well received. Through these accessible and beautiful portrayals, the festival has shone a light on the women who are helping to shape this country through their lives and work. That I get to help bring the films to Fernie is just the butter on the popcorn.

In:
Community
Tags:
community, Fernie BC