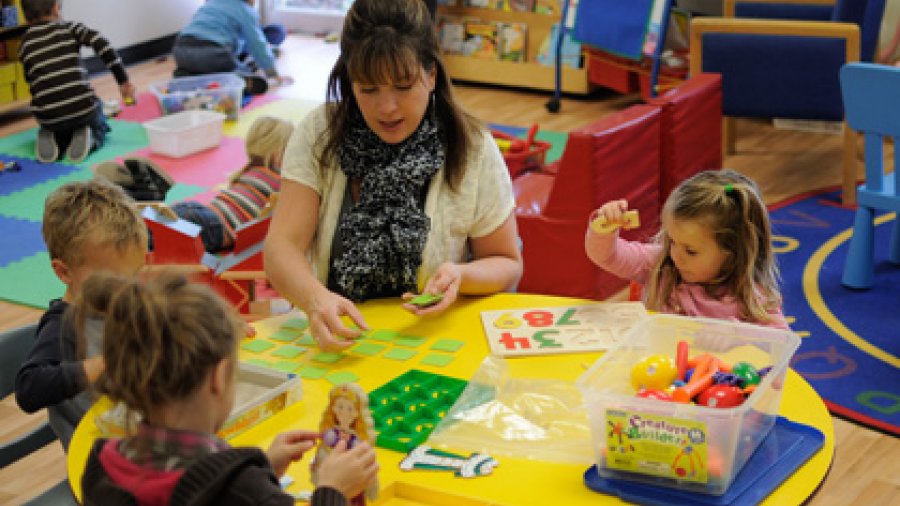 Once we’re filled with turkey and eggnog, spent more money than we thought possible and have had one too many late nights, January appears and with it a complete, yet welcome, change of scene. The gym membership starts up, you get to eat a normal amount of food and the whole family starts going to bed at a ridiculously early hour. The latter is perhaps a good thing for the younger folks, as January also spells out back to school. As a young kid, this doesn’t please you much, but really showing up to school to hang with friends, be entertained all day and to learn some invaluable facts, is the easy part. Teachers, school boards and parents often don’t have it so easy.

This month’s Unsung Heroes are some hard workers who show dedication and on going love for kids and this community. Last summer, unbeknown to pretty much anyone who doesn’t have a two and a half month to four year old child, the Bright Beginnings Pre-School was on the move. I chatted with Kristen Garrett Miller, who along with a couple of other hardworking ladies, such as Kim Shopland and Mona Snyder, was pivotal in this mammoth task.

What is the history of Bright Beginnings?
“It started in 2007 and before that was the Holy Family Playschool.” Open to kids 30 months and up who are potty trained, it focuses on “play through learning and is the stepping stone to school.” Furthermore, “it is supported and encouraged by the school system, fees are low, and it’s available to all.” It runs as a “non-profit organization, counting on fees, fundraising and a small amount of Government funding” to operate. However, such pros come with cons, primarily in the form of waiting lists. The Fernie baby boom is for real.

How did the move come about?
With Isabella Dicken growing and requiring more space, the pre-school needed to relocate by September. A mere 68 families were counting on this move, so no pressure. “The School District offered space in the Learning Centre,” which was in the midst of renovations.

Unfortunately, despite Bright Beginnings continuing on similarly, if a school has to relocate licensing applications have to be started from scratch. “It was a 200 page application and every time you called them you spoke to a different person. Our six year history meant nothing because we were moving to a new location, had new teachers and a different capacity.” Furthermore, there were approximately 70 other applications in process at the same time. “It was very challenging,” says Kristen and subsequently, despite everyone’s unfailing efforts Bright Beginnings was delayed a month opening. Great for summer holiday loving kids, not so great for busy working parents.

How did the ‘move’ go?
Kristen laughs and shakes her head at the still vivid memories of her summer ‘holiday’, acting out her newfound role of General Contractor. Licensing, despite being tedious, was perhaps the easy part, now there was fencing, layout and a million different rules and standards to adhere to. “It was hard work and a volunteer role! I’m not a carpenter, a welder or a contractor. We had to use specific gravel, get nets to protect kids from the nearby golf course and fencing. I was a mom on a mission!” she laughs through slightly gritted teeth. Did I mention Kristen had her two young kids in tow throughout?

After three weeks of planning and five weeks of labour, the pre-school came to fruition and despite the new facility being licensed for one less child per class, now at 16, the outside play area is bigger than before, resulting in this “logistical nightmare” proving a great hit. The pre-school still interacts with Isabella Dicken by taking part in assemblies and reading programs, resulting in a perfect combination.

The moral of the story, “It doesn’t just happen,” says Kristen. Although “volunteering is meant to make you 20% happier in life” she jokes, it also pulls you in every direction, “putting pressure on yourself and others around you.” This tale yet again highlights the amazing efforts of our community.

Kristen, would like to personally thank, “Mick from Foothills Silviculture and your mighty machines. School District #5 for all the hard work creating an amazing space. Nufloors for the flooring, Duncan at Fernie Mow & Snow and Matt with Summit Works. Big thank you to my husband Lyle, Ryan at Home Hardware and Brian from SD#5. Kim and Mona, Teck for the financial donation. And to all the moms and dads who volunteered and showed up to build, shovel, pack and carry.”