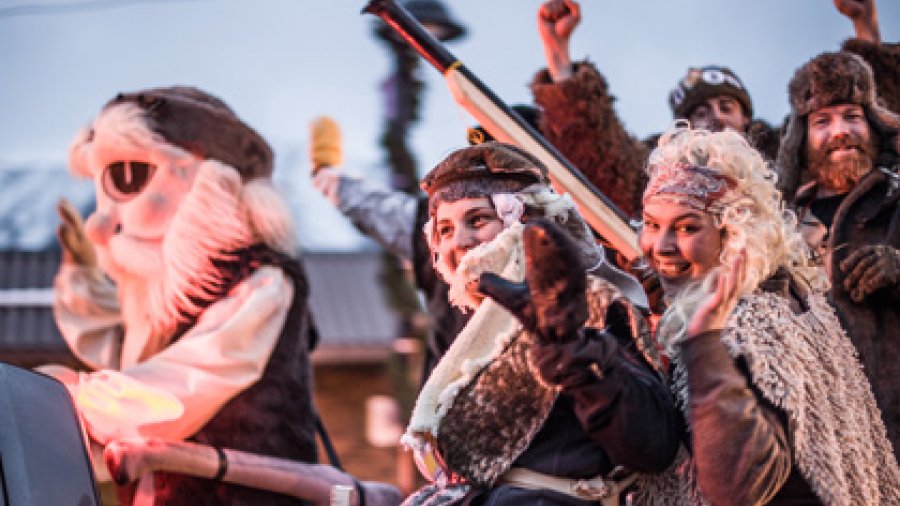 Ten years ago I moved to Fernie and tentatively dipped my toe in the volunteer pool. I started with by showing up at events like the Canada Cup or TransRockies, standing around in the rain or the sun and doing anything that was needed – from course marshalling to putting up tents to selling beverage tickets. Getting more heavily involved over the years with various other projects, the one that has really stuck with me is the Reel Canadian Film Festival – this is the fifth anniversary of the event and I’m thrilled to see us celebrate this important milestone, however I’m just as excited to be involved with another venture this year – Griz Days.

Griz Days has gone through many transitions since it began in 1978 but what has stayed strong is the fantastic community spirit and passion for Fernie’s favourite winter festival. The Chamber of Commerce now heads up the event and has worked diligently over recent years to tighten up the schedule of events and make sure that there’s something for everyone to enjoy. From Baby Griz Crawls to the CP Rail Jam to beverage gardens with live entertainment, Griz Days is truly an event for the whole community on the first weekend of March: Friday-Sunday, March 1-3.

Start the weekend off right by taking a free brewery tour at Fernie Brewing Company on Friday afternoon, then head downtown to check out the CP Station Square Street Party. Relax in the beverage gardens, enjoy tunes from the Coal Creek Boys and check out the preliminaries of the Commit to Pain Rail Jam hosted by Commit Snow & Skate and sponsored by CP Rail. The brand new Griz Jail will also be downtown on Friday, and the Sheriff will be locking up Fernie’s most wanted along with anyone not wearing a Griz Pin. Make sure to pick your pin up at local retailers so you don’t get thrown in the clink!

On Saturday there’s a packed schedule of events to enjoy. Start off with a family friendly geocaching session with Wild Nature Tours or register your team in advance for the 14th Annual Classic Canadian Street Hockey Tournament at the Park Place Lodge. The Craft Fair will be on all day at the Fernie Community Centre, where you can take in the Extreme Griz Pancake Eating Competition and the Baby Griz Crawl. The main Extreme Griz Competition will be held at Fernie Alpine Resort on Saturday afternoon. The evening festivities kick off at 6:30pm with the annual Float Parade – this year’s theme is “Light Up the Night” so there’s plenty of scope for some really inventive entries. Continue the fun at the CP Rail Jam Finals and beverage gardens with live entertainment from 60Hertz, check out the Grad “Fun Fair” Fundraiser at the Elks Hall, or join PT the Clown at the kids’ Dress-up Parade. The evening finishes with a fantastic fireworks display to truly light up the night. Round out the weekend at Fernie Alpine Resort on Sunday at the hilarious Raging Elk Dummy Downhill.

Community events such as Griz days wouldn’t be possible without the enthusiasm and hard work of countless volunteers along with incredible support from Fernie’s many wonderful small businesses and organizations, don’t forget to wear your Griz Pin and get involved too! Keep track of new events as they are added to the schedule by liking “Griz Days 2013” on Facebook, visiting www.ferniefix.com or calling the Chamber of Commerce on 250-423-6868.

From the very start of the month to the very end! The Reel Canadian Film Festival will be held Friday, March 29 – Sunday, March 31 at the Vogue Theatre, with afternoon shorts programs presented at The Arts Station. I’ve had to step back somewhat from this year’s planning, but the dedication from the rest of the committee is nothing short of inspirational. The RCFF welcomes Canada to Fernie for a showcase of film excellence and a celebration of the very best of Canadian Film-making, featuring a schedule of the most engaging, entertaining and exceptional films we can find. Each year a new aspect keeps the festival atmosphere fresh and interesting. In 2009 we featured a “Taste of Italy” at a festival-within-a-festival, and last year we had a preview night one week prior to the main festival to give guests a taste of things to come. This year we’re working with local groups to bring an even better experience to our audience, and we’ve pushed the boat way out with our “Focus On” Shorts program. Previous years have featured shorts from talented film-makers from Winnipeg, Calgary, Vancouver and Edmonton but this year we’re reaching out to Halifax to bring you a look at the East Coast’s emerging film talent. Don’t miss Saturday’s Focus On Halifax! The full line-up will be available shortly after this article goes to press, so visit www.reelfilmfest.ca for full details and like “Reel Canadian Film Festival” on Facebook for updates.