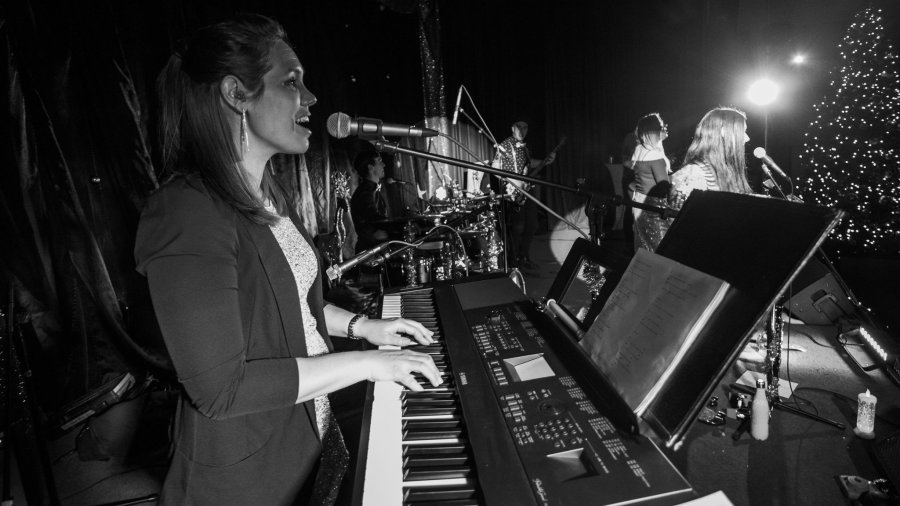 In high school, I was in band… no big surprise there. I played the flute and the piccolo and was often put on piano or percussion in Jazz Band. So, how excited was I to meet up with the head of the Fernie Secondary School’s Music Department, Barbara Bassett only to learn that she also is a flautist.. like a real one?

Barbara is originally from Waterford, Ontario, a town about the same size as Fernie known for its tobacco farming. “I was always into music,” she tells me. “My mom played guitar and sang at church. When I was about eight or nine, I wanted to play the flute. My mom convinced me to start with the recorder, but nope. I wanted to play the flute.” Of course, I have to ask, where did you find someone who taught flute?

“I was so lucky because Kim Shippey, who plays professionally and has recorded CDs, lived 20 minutes away and I was able to take private lessons from her,” Barbara says. By the time she got to high school, Barbara recognized that this was something that she wanted to do and became more serious about it. “I was in the high school band and the youth symphony and in Grade 12 I sent out applications and travelled to each university to audition. It is very competitive as there are hundreds of flute players. I attended Wilfrid Laurier University in Waterloo and was one of five flute players who got in.”

When attending music school, the ultimate dream is to perform in an orchestra. “Being a member of a pit orchestra for musical theatre was my dream,” she shares with me. “An eye-opening thing happened when I auditioned at the University of Ontario. I mentioned this goal and one of the examiners said to me, ‘you can’t do that, it’s my wife’s job.’ I realized then what a small number of people had these positions and changed focus in my program.”

At first, Barbara dabbled in music therapy, but she knew music education was a good fit for her as had been told often that she was a great teacher. She took Techniques courses so she could teach all instruments, as well a New Technology as anticipated it being instrumental in the future.

After graduating and travelling for a year in New Zealand, Barbara attended Teacher’s College at the University of Toronto. “My first job was overseas in England… teaching English! I learned the most about teaching in this job. It was excellent, but very hard work and I’m a better teacher because of it.”

When she returned home, Barbara went into outdoor education as had extensive experience working at summer camps. By January she made the switch to music and it was that spring that Barbara saw an advertisement for a full-time position as a music teacher at Fernie Secondary School. Seven years later, Barbara is still here and happy to see the growth and development of the Music Department. Band starts in elementary school with every student in Grade 6 and 7 taking band and picking their own instrument.

“It’s incredible to watch them go from zero to playing at least six notes by June, playing in a band and having their own parts. It’s different coming off of COVID - last year, they could only do guitar and drums. We just brought it back this year and it’s been really lovely. I always tell the students, when you’re in a band, you can do something bigger and cooler than what you can do alone.”

One of Barbara’s strategies is to invest in teaching the grade sevens as they become role models other kids want to be like. “We’re in the build-up phase again, there is so much talent and potential in this community,” she tells me. “It’s such a confidence builder with kids, and I’ve really noticed it teaching English as well. Some of the kids that won’t speak in class get their voice through their instrument. It’s a safe space where they are part of a team. They look out for and help one another. It’s really cool to see.”

Many may not know that Barbara is also one of the members of the Hip Flexors, the local band that always gets everyone on their feet. “It’s a good challenge being in an events band – it’s the first band that I have been in that makes people want to dance. I am so grateful to work at the high school as it’s very rewarding, and it’s a bonus being part of the Hip Flexors and developing my own musicianship.” Musicianship indeed, Barbara is mainly on the piano with the Hip Flexors but also plays the saxophone, trumpet, flute and rhythm guitar while on stage.

What’s next for this gal of all instruments? She is taking a year off teaching to travel. “It is hard to say goodbye but I’m very lucky to have something that’s hard to leave and will be excited to come back and start it up again!”

Enjoy your travels, Barbara. Perhaps you might consider private lessons for a certain someone who has a flute gathering dust in her office…

1. When did you first arrive in the Elk Valley and what brought you here?
2015, and it was the job at Fernie Secondary that brought me here.

2. Who did you first meet?
Dan Whillans and Katie Keast.

3. Do you remember your first general impression of the Elk Valley?
Oh, that it was just beautiful and such an active community.

4. What keeps you here?
The community connections, friends, and colleagues. During COVID, it really hit me how much we really care about one another. I don’t take it for granted.

5. Do you have a favourite pastime?
I like my mountain biking and my cross-country skiing.

6. What time of the year do you love most and why?
It’s a tie between summer and fall. Summer I love the slower pace, but fall you’ve got the excitement. The colours, fresh start of a school year, all of the potential.

7. Where do you see or hope to see the Elk Valley in five years.
I would like to see arts and music events continue to grow, and for classical events and the fall fair to make a comeback.

8. How do you start your day or what is one of your daily rituals?
Morning yoga in my living room and a cup of coffee.

9. Tell us something people might be surprised to learn about you.
I was a cheerleader for a couple of years in high school.

10. Quote to live by: All of us are better when we’re loved. Alistair MacLeod (No Great Mischief).