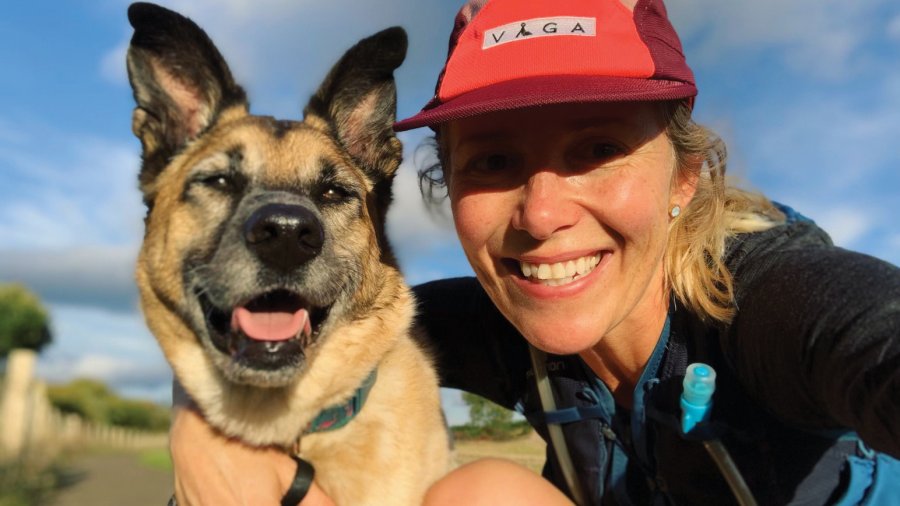 I was having some difficulty thinking of who to feature in the Kickstart Issue, and Vanessa immediately said ‘Abi!’ - someone I never thought of because to be honest I typically shy away from featuring my friends. But, yes! Abi Moore knows how to get things started better than anyone I know, and since she’s off in Scotland for the winter with her parents, we planned an afternoon (evening) zoom with a coffee (beer) in hand!

Abi was born in the Lake District, North of England and then she and her mum and dad moved to Scotland when she was eight. “I’m self-declared Scottish, but I’m not,” she tells me. Both of her parents were retired teachers, “and I was a lucky kid who got to do a lot of travelling, skiing and hanging out with adults. It was a very different upbringing. I was quite mature as a kid, and since have regressed.”

After graduating high school, Abi went to the States to take her level one ski instructor course. “Then I went to New Zealand and travelled through Asia on the way home… like every British gap year student,” she says. “I was dreading going to school, my mum had me tested for Malaria because I was so grumpy!” Abi reluctantly went to university, “I probably did more skiing and rowing than schooling,” she shares. Studying education and music, as soon as Abi finished, she moved to France for a season before heading to London to begin adulting. “I made it three years before realizing I didn’t enjoy it and decided to go to Canada.” Abi had heard about Fernie through a few people who had come the year before. “And I had been to Whistler and found it a bit big. Fernie was a great in between!” Once here, Abi travelled to a few other places but was happy with Fernie. “I got a job at the ski hill, found a house and that was that!”

With just a year’s visa, and having met her future husband (Mike Moore), Abi decided to take her level two instructors as she could get sponsored through the ski school. “And I got my residency the following summer!” After ski school, Abi worked in various positions including at the Arts Station and the College of the Rockies until she landed a position with Fernie Brewing in 2010, where she continues to work as Marketing Brand Manager. “It’s been a long stint,” she laughs.

So, just how did Abi get into event organizing and building a community for runners?

“Well, it was during dinner with you after I had finished my first trail race. It was grassroots and really fun! I asked you, wouldn’t it be fun to create a duathlon? And we did - Tears and Gears was the initiation!” I nod, vaguely remembering. Not an avid biker, Abi feels as though trail running was how she compensated. Mike diving into the Sinister 7 introduced her to the world of Ultra Running, “and while I thought he was crazy, I did Sinister the year after and was immediately on board.” (Having been the support team for this duo, I would say equal parts crazy and amazing.)

Through Tears and Gears and its community-focused appeal, it was obvious to Abi that there were trail runners in our community of all levels but there was no club or support for them like biking. Stag Leap was created, first with a weekly run club. Having ran a lot of ultra races, Abi and Mike could see the community they created and really enjoyed the stories and characters that came out of them. They knew Fernie had an amazing network of trails and decided to create an iconic Fernie event – a goal race. “The Elk Valley Ultra is not an easy first 50km, but it has all of the things we love at races and learned through Tears and Gears – camaraderie, grassroots, but more challenging,” Abi says. “A year or so later, we created the Lone Wolf. It’s a really popular format from the UK that has since become popular around the world – the last runner standing. It’s great because it appeals to various goals, distances and experiences… and it’s the funnest format out there.”

The goal with Stag Leap is to always be affordable, inclusive and open to any level. Prior to COVID, they began partnering with other individuals to offer workshops and that is something they look forward to continuing to do in future. Abi also is keen to get into coaching.

“I would love to do more clinics and have signed up for an online coaching course to get a certification and do more along those lines. I really enjoy that side of things, seeing people’s progression and seeing themselves as a runner,” she shares.

With the growth of Stag Leap and Abi’s various experiences, it comes to no surprise that she created the #FernieStreak – something that has become an annual staple in January. Having recently completed a run streak, Abi thought it would be a great idea to ‘kickstart’ the year in Fernie. “I was thinking multi-sport and reached out to various organizations to work together to create this community challenge,” she says. With the Fernie Trails Alliance, City of Fernie, Fernie Mountain Bike Club, and the Fernie Nordic Society as partners with Stag Leap, the #FernieStreak is going into its fourth year and has grown exponentially. Last year, it raised $7000 for Foundry East Kootenay, and this year the recipient is Twin Meadows Animal Rescue. Kids and dogs can register for free, and adults are $10 with the option to donate additional funds to the recipient.

“This year for the #ferniestreak we hope for great attendance, people trying new sports, touching base with friends, and finding a fun community experience they perhaps didn’t know they needed in January – it will fly by!” Abi says. “It’s just 30 minutes a day, you can reset without the pressure!” We couldn’t think of a better way to kickstart the year!

What does 2022 have in store for Abi? Well, first up is the #FernieStreak and the #FernieArtStreak, but of course she has some events lined up with the most exciting being the TransRockies Run in Colorado. “It’s over Mike’s birthday and our anniversary, so we’re really looking forward to it.” And the most exciting is being able to host their events again, with the Elk Valley Ultra in July and the Lone Wolf in September.

Thanks, Abi. We’re sure grateful for your inspiration, encouragement and Scottish wit and look forward to participating in or volunteering for your events in 2022!

1. When did you first arrive in the Valley and what brought you here?
October 2006, snow!

2. Who did you first meet?
Natalie Parr.

3. Do you remember your first general impression of Fernie?
Small, wet (it rained a lot that October), and good coffee shops!

4. What keeps you here?
Not snow, the community.

5. Do you have a favourite Fernie pastime?
Trail running!

6. What time of the year do you love most in Fernie, and why?
I think summer. Shorts, t-shirt, trail shoes and running.

7. Where do you see or hope to see Fernie in five years?
To never lose its charm and community which makes it so strong. However it grows and changes if it still has that it will continue to be a great place to live and visit.

8. How do you start your day or what is one of your daily rituals?
Taking the dogs for a walk.

9. Tell us something people might be surprised to learn about you.
That it wasn’t until I went on a cycling trip in Spain a couple of years ago that I decided I liked coffee.