Raising a Glass to The Professor 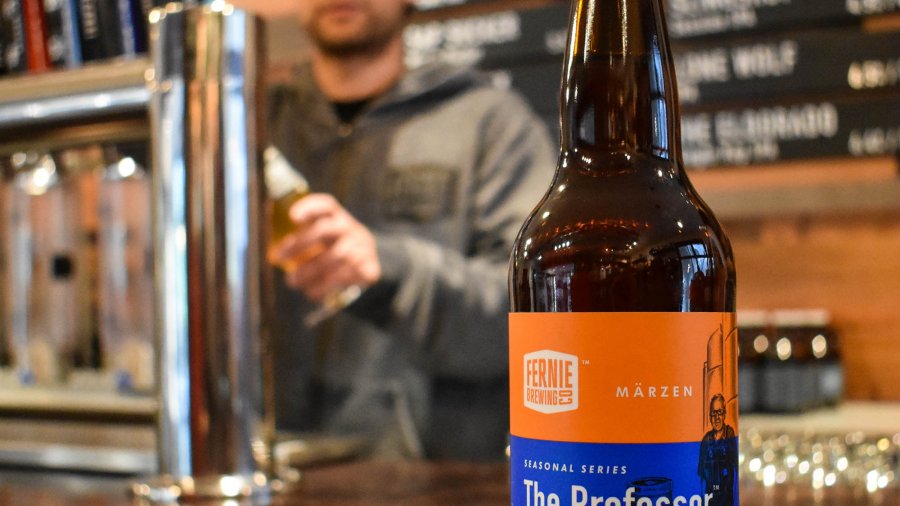 On October 5th, a perfect fall Fernie day, inside Fernie Brewing Co.’s Tasting Room, the latest FBC seasonal brew officially launched. A brew which is undoubtedly the most special of brews to date, and close to the heart of staff, family and friends of Fernie Brewing Co.

The Professor Märzen is a commemorative brew, named after and stemming from, a partially created recipe found in past FBC Brewmaster Gord Demaniuk’s recipe book. Aptly, this brew launches almost to the day that Jeff Demaniuk, FBC’s now Head Brewer, was announced to be filling the large rubber boots of his late father, Gord Demaniuk, who passed away after a long and courageous battle with cancer, last September.

A huge fan of Lagers, Gord had always wanted to add a Märzen to FBC’s lineup. Unbeknownst, soon after Jeff joined the crew, a partial recipe for a malty, amber coloured Märzen was found in Gord’s recipe book. There was no doubt that this beer was to be added to FBC’s brew calendar, and a few months later, Gord’s recipe was completed with much love and respect, by current Head Brewer and son, Jeff Demaniuk, and FBC’s team of Brewers.

The Professor Märzen is a small-batch Bavarian beer, and a perfect accompaniment to all things Oktoberfest. A medium bodied, amber coloured Lager, with European hops. Rich, toasted and caramel malts, with a hint of noble hop flavour and aroma. Malts include, Munich, Pilsner, Caramunich, Vienna and Melanoidin. Whist Perle, German Traditional and Mt Hood hops are used. At 5.5% and 19 IBU, it promises an easy-drinking, malty Lager, that Gord would have loved.

The name? With Gord being a huge fan of Breaking Bad, at home in the FBC lab, and invariably turning up for work in some sort of dress up, it was a great fit, for a great brew and a great guy. The Bomber label meanwhile not only fittingly adorns the colours of the Oilers, but well represents the Bavarian brew inside, and is finished off with an uncanny illustration of Gord.

As such, to launch this beer in true Gord style, Fernie Brewing Co. joined together with Fernie Friends for Friends – a local charity who helps families in the area going through cancer, one of these families being the Demaniuk’s – for an official launch party. FBC’s revamped Tasting Room was decked out in all things Bavarian, pretzel necklaces handed out upon arrival, whilst brats were served up and sold by donation to Friends for Friends, to accompany The Professor samples being handed out by lederhosen and dirndl wearing staff. With a big, heartfelt toast to FBC’s very own Professor.

After a frantic fall full of beer launches, this one is certainly the highlight, and the icing on the cake for Fernie Brewing Co. The Professor Märzen is available locally as of today, and will be making its way throughout BC (LRS stores only) and Alberta in coming weeks.

Keen to try the rest of Fernie Brewing Co.’s recent fall, seasonal and limited release brews? Be sure to head to the below Blog Links, to read all about and to track down the below products, over coming weeks…