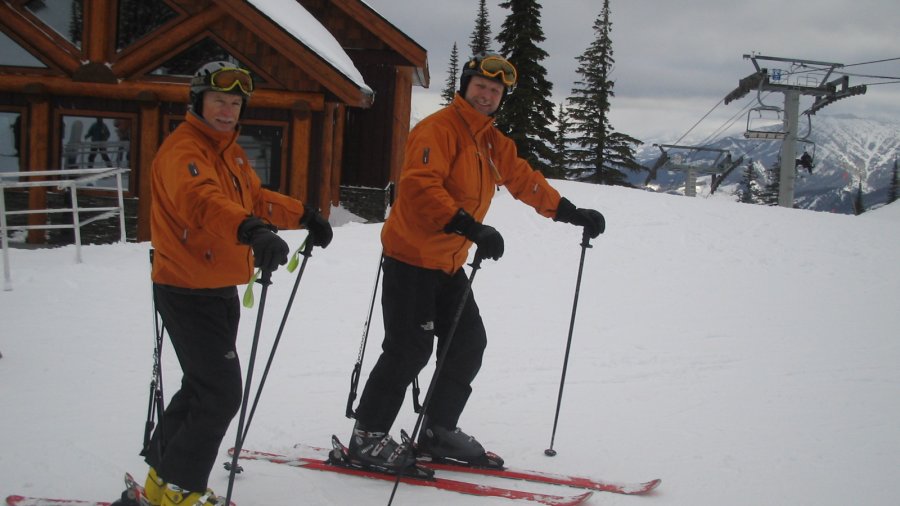 I recently read a feature in the Fernie Fix which made me think about the difficulty some people face in pursuing their passions when your body is no longer in optimal form. About three years ago that was where I was. When I was 34 years old I dislocated my right knee and partially tore the ACL. I didn't rehab it properly, I dislocated it several more times, and 26 years later, after going through nine custom built braces, thousands of games of slo-pitch, over 1000 ski days, and a few thousand days on the mountain bike, I have a severely arthritic knee with no cartilage remaining in the lateral compartment, and bone on bone contact. I've had it scoped three times to clean it out and remove cartilage, and have tried Synvisc injections (an artificial lubricant) four times.

Five years ago I retired with the dream of skiing and biking the rest of my days. The dream was fading fast just three years ago. I was skiing in pain every day, reduced to three or four hours per day, and my stomach was definitely letting me know it didn't appreciate the 1800 mg of prescription strength anti-inflammatory drugs topped off with 1300 mg of Tylenol I was taking to numb the pain. The hard pack rippers had me skiing on one leg because the vibration had my knee howling. Bumps were absolutely out. That was when I googled “skiing and arthritis”, and a website on the CADS ski system came up. I went on the website and read about a simple but unique invention that promised to reduce knee trauma and pain significantly. I was so excited that I phoned the inventor in Vail, CO immediately. After a 40 minute chat with him, and being desperate to continue skiing, I bought the system sight unseen. It arrived in November, and I proceeded to learn how to ski it without any help.

Essentially, I wear a climbing harness around my hips to which two kevlar cables are attached, one at the back of each leg. These cables exit the back of my ski pants through two grommets installed in the back of the ski pants. Bolted to the back of my ski boots is what the inventor calls a power unit, a multi-directional receptacle unit for a fiberglass rod with an attached bungee chord. I place a fiberglass rod about 30 inches long with a pulley on top in this receptacle, and align the cables from the hip harness over the pulleys, then attach the cables to the bungee chords on the power units. As I sit into my natural ski position, the rods push up, and the result is to lift up on my hips via the harness. It takes about 40 pounds of weight off my knees, hips, thighs, ankles, and this weight is transferred through the rods to the ski right under my boots. The end result is skiing with much less weight on the legs, (which lessens the effect of any injuries of the legs to my skiing, in my case an osteoarthritic knee), and constant force on the ski, (which makes them track smoothly, and requires less leg power to set edges and initiate turns).

A payoff I didn’t expect was turning skiing, an anaerobic activity, into an aerobic one. I ski top to bottom, no stops when I choose, and haven’t had leg burn in the time I have been on them. The other payoff is fewer falls – the result of constant pressure in the ski. One would think that with all this stuff on I look like a geriatric skier on the slopes. The exact opposite is the case. I ski better on these things than before, ski all conditions aggressively and effortlessly. When I get ready to go skiing in the morning, it takes an extra minute to slide into the harness as I put on the ski pants.

When I began on this system, my skiing was almost done. Now, there is no end in sight, and I am thoroughly enjoying skiing again because most of the pain is gone, and I’m not swallowing anti-inflammatory drugs like candy. After a season on the CADS ski system, I asked the inventor if I could be his rep in this area – he agreed, and I now take interested skiers out for a free demo. I have invested in a demo pack, and in about ten minutes I can mount the system temporarily on anyone's boots and take them out to get a feel for the system, and to see if it helps them. The 2009-2010 ski season is coming up and the best time to demo is early in the season before your knees have begun to swell and get sore.

This year I am 61 years young. I moved to Fernie permanently in 2007 after skiing here since 1972. Last season, thanks to the CADS ski system I skied 107 days. My knees felt great at the end of the season – I hopped on my mountain bike and rode off on my other passion without pain. It was entirely by chance that I found these things, and if passing my story on strikes a chord with you and your situation, e-mail me at dcleland787@gmail.com. We'll talk knees, and hopefully I can help you out.