A Window on the World 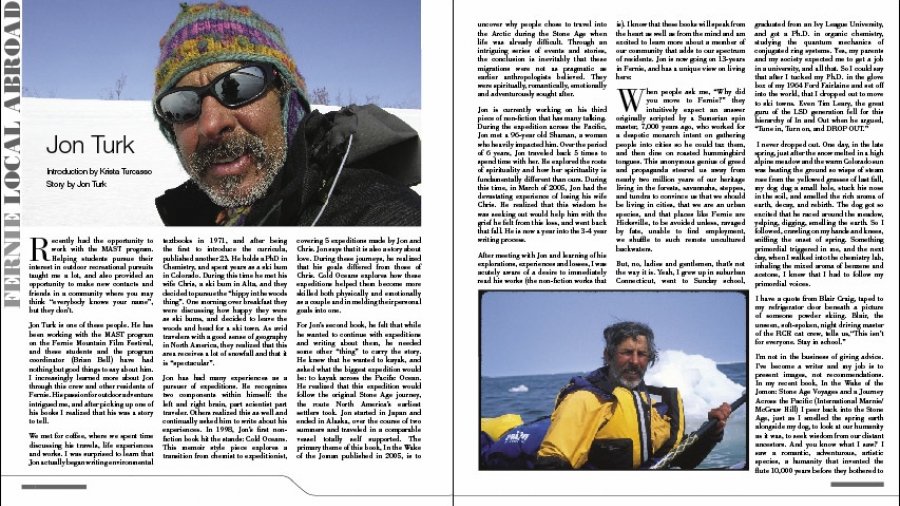 Researching this column is always a treat, but never more so than when I come into contact with the inspirational people who touch our lives. These people come from all corners of community life but some of my favourite Fernieites are rarely to be found here. I’ve only been able to speak directly to an elusive few, but whether I’m interviewing them or reading about them in someone else’s column, these have been my favourite Fix stories over the past five years.

These Fernieites are, of course, the adventurers and explorers that we have come to know through the pages of the Fernie Fix and through their presentations when they take a moment to pause and gather their thoughts for us to share. Every time one of these people appears in the magazine I devour their story with the appetite of a travel-starved backpacker. We’ve visited Africa and South East Asia, sailed the oceans and cycled across mountain peaks within these pages. When we read about these amazing pioneers we feel as though we know them, sharing in their triumphs and their sorrows and visiting with them the beautiful unspoilt places which they seek out for us. In reality it may only be a glimpse of who they are but for a moment we leave our sunny, comfortable Fernie lives and stand with them on the precipice.

Reminiscing about past adventure features made me wonder what these intrepid explorers are up to now. I last spoke with Dutch-born Bernice Notenboom after her Himalaya trip where she summited Mount Everest. Exploring global climate change has taken Bernice as close to every ‘corner’ of the globe as it is possible to go- prior to Everest, she skied to the North, South and Cold Poles and across Greenland. These days she’s as busy as ever. Most recently she kayaked the Bani and Niger rivers in West Africa to explore the nature and culture of essential waterways in one of the hottest and most desolate regions of the world. Her film, Desert Alert will hopefully screen in Fernie this winter. She has also published a book about her polar adventures and is currently working on a series about tipping points in the world’s climate.

Parallels can certainly be drawn between Bernice’s travels and those of fellow adventurer, Jon Turk, not least because they both most recently took to the water on extended kayak adventures. And yet while Bernice focuses on climate change, Jon takes a more anthropological approach- even exploring Shamanism in Siberia which you can read about in his most recent book The Raven’s Gift. Of course it’s impossible to separate humanity and climate entirely- to look at one you must also examine the other. Bernice and Jon understand this better than most and while Jon challenged his own abilities on his most recent trip, the unpredictable climate is also a major player in his expedition blog. The circumnavigation of Ellesmere Island is a feat of human endurance and a passage across open water and fast and fractured ice so difficult that it has never even been attempted before. Having successfully completed it, Jon and his expedition partner Eric Boomer have been nominated for National Geographic’s top ten adventurers of the year.

Arms weaving, bright eyes darting around the room, soft, lilting voice- Jon Turk is not only a born adventurer, he’s also a born public speaker. Sharing in his stories is like being there with him, you don’t get the blisters but you can almost feel the sun and wind in your face. Jon hopes to bring his latest adventures to Fernie later this winter- don’t miss a chance to see both Jon and Bernice speak and travel with them on their sometimes wild, sometimes peaceful, but always fascinating journeys. Watch this space or visit the calendar. on this website.