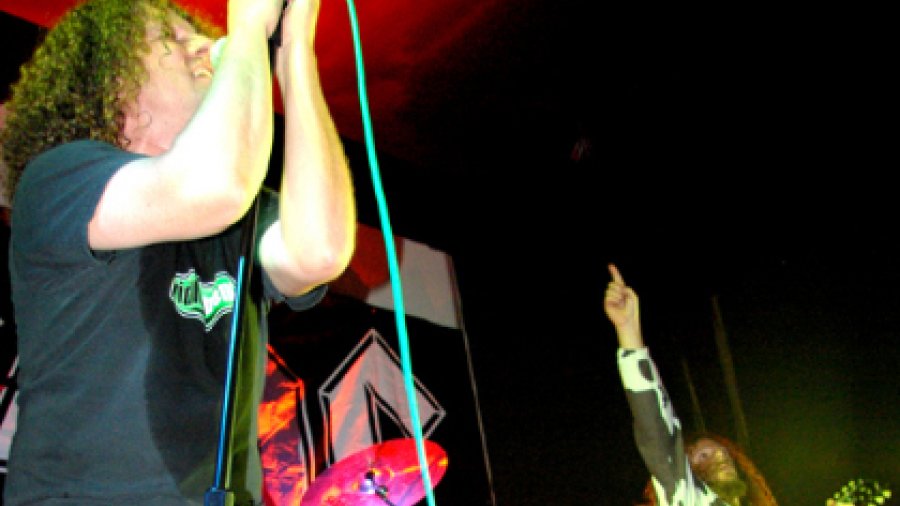 It has to be frustrating to have a band halfway around the world taking ownership of your music, songs that you’ve played in front of thousands of sweaty, satisfied fans. And it has to be maddening that this band is so blatant in its plagiarism that it can’t even think of a truly original name.

But Mad Cow, BC/DC guitarist and the artist formerly known as Angus Hung, is pretty blasé about the apparent success of the BC/DC tribute band AC/DC.

“We hung out with Mike Fraser, the guy that’s mixed a bunch of their albums, but we’ve never met them personally,” he says yawning. “They’re in awe of us. They’re too frightened to be around us, because we are that awesome.”

Nobody really knows how the artistic achievement of BC/DC travelled all the way to Australia to spawn a reasonable facsimile of the Nelson band. It was in the days before MySpace, Facebook and Twitter, after all. But this reporter thinks that, perhaps, Aussies took this cultural gem back to the island after wintering in ski towns across the West—much like the Europeans brought sugar and potatoes home from the Americas.

“I don’t see the point,” Cow re-iterates. “I mean, how could they live up to such lofty heights as we have set? The bar is just too high. So I say to them, try doing something original—you’ll never be as good as us.”

If you haven’t seen the band, it’s not difficult to know what you’re thinking: as if they’re that good. As if BC/DC plays “Hell’s Bells” and “Back in Black” like it’s 1980. But the quintet will shake you all night long, no question. With Mad Cow and his brother Mangus Hung on guitar, Spliff Swilliams on bass, P. Thuddy on drums and Brian “Bon” Johnscottson manhandling the vocals, you’ve got a recipe for mayhem.

From Quesnel to Salmo, from Lethbridge to Sandpoint, BC/DC has brought the gift of rock ‘n’ roll. Not everyone is a believer, however. The boys have pulled into towns to church billboards announcing that passersby should “Pray for our city. BC/DC is coming.”

“That was in Rome,” Cow says, “the one with the Vatican in it. They were a little concerned—rightfully so; we worship Satan. But nothing happened particularly nasty, I don’t think. We were okay. We were very polite and tipped well.”

It’s difficult to know when Cow is teasing and when he is speaking the truth, but living by the Sex, Drugs and Rock ‘n’ Roll gospel doesn’t necessarily a Satan worshiper make. Cow is, after all, quite tight with Oprah (“Sometimes she babysits for me,” Cow reveals. “She does occasionally fly into Nelson on her private jet, and we have tea and biscuits.”), and she didn’t get to where she is today by signing a deal with evil. Right?

“There’s a lot of crazy people in her audience, I noticed,” Cow says. “I think that they think that they are at some sort of gospel religious experience, but it’s actually just a talk show.”

“Granted, I was there,” he adds. “So I can understand—that tends to happen wherever I go. Anyone in the band, wherever we go, whenever we leave the compound, there’s always that sort of absolute insanity around us. We can’t help that—we just have to accept it and live with it.”

It’s the same kind of zen he has about the repeated questions he gets about AC/DC (the other band members refuse interviews because of them). Then again, there may be Hell’s Bells, AC/DC, Who Made Who and all manner of tribute bands, but there can only be one BC/DC.

BC/DC is performing at Bulldog’s North on Saturday, January 29.