When in doubt, Go For the Eyes 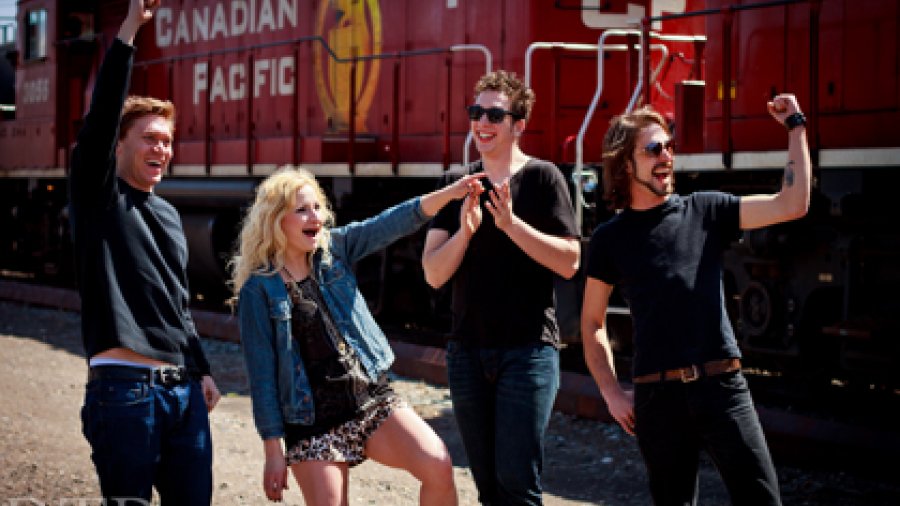 There is nothing quite like seeing a band that owns the stage, that gets its audience jacked up. Here in Fernie, we’re lucky to have Shred Kelly, a homegrown band that does that in spades. As our local favourites go on the road to flog their latest release, Calgary band Go For the Eyes are more than ready to take the torch. The two bands shared the stage last March, and while each band delivers different sounds, each makes dancing an involuntary action.

“We’re fans of each other’s bands, basically,” says Go For the Eyes vocalist/keyboardist Elise Roller. “We’re definitely a different genre, but we’ve done a couple of shows with them—one this year in Calgary. We put on a really awesome show for them and our fan base really, really likes them. If you can party to music or dance to music, our fan base likes it. It is actually really complementary, and I think that it allows for a really interesting night.”

Because of its high-octane rock and roll show, Go For the Eyes has been labelled “circus rock.” It’s a label that stuck—even as it raises the question, what is circus rock?

“It’s not a used term, but once someone hears us and see our live show, they get it,” Roller says. “I sort of feel like I want to create a genre. I mean, the term indie music, that wasn’t always something. Even garage rock—those trends came from somewhere. And I think that it would be really sweet if someday circus rock was just a term that people used to describe a genre.”

Since its inception in 2008, the foursome of Go For the Eyes has worked hard to stand out and make a name for itself, in Calgary and beyond. And the work has paid off. Last year, the band got a coveted spot playing Canadian Music Week and, more recently, had its stop-motion music video featured on OK Go’s website. Given the fact that OK Go’s award-winning videos get some serious traction on Facebook, the recognition gave Go For the Eyes a serious boost.

“We did the video on a budget of $2000 and we got our boxes donated to us by a packaging company, and what we did was make a giant jumbotron with the boxes,” Roller says.

“Two hundred and fifty boxes,” adds vocalist/guitarist Jeff Turner. “It took us about seven or eight hours to paint the boxes.”

“I think it was more than that,” Roller interjects.

“It was long time to paint the boxes,” Turner agrees. “We were showering that day, and you would sneeze in the shower and there would be nothing but spray paint coming out of your nose.”

Because much of the video is stop-motion, the shooting took a long time as well. With a team of volunteers to move the coloured boxes for each shot, the band and video director spent a couple of 12-hour days getting the footage down for a single song.

“In the long run, it was pretty stressful—if you look at it that way, but it was totally worth it,” Turner says. “We think that we made something that was pretty cool and pretty original.”

Go For the Eyes performed at the Northern on Saturday, October 6.

Los Morenos returned to the Royal on October 5. The band’s blend of utterly danceable Latin-infused, funk-a-riffic music is sure to light a fire under anyone’s feet. With thousands of shows on its resumé—including opening for Afro Cuban All Stars—Los Morenos are not a band to pass up.

For something completely different, Doc McLean and Morgan Davis perform at The Arts Station later in the month. Bringing the 7th National Steel Blues Emergency to Fernie on October 28, the pair is set to heat up the stage with vagabond stories and searing blues. Both have the stage experience of decades to inform the music, which is just right because the blues, more than any other genre, requires its musicians to give their lives to the music.