We’re Here for an Old Time 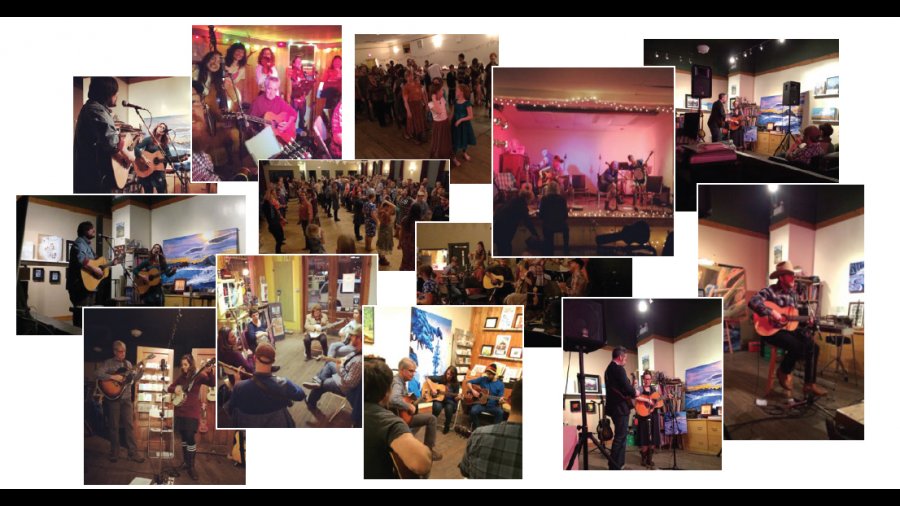 Back in May, I went to the Island to see the Waterboys, an old Scottish folk rock band. This was an auditorium show at U Vic with a bit of an older crowd (the band was formed in 1983), and the excitement was palpable. But! During the show, I did not see one phone out while the band was performing.  I know we weren’t the only ones in the room who thought they’d never get a chance to ever see the band. Still – not one phone up in recording position. We sat. We listened. We sang along. We were present. No screens between us and Mike Scott’s ragged voice.

Michael Hepher and Anie Radish have been working hard to cultivate that kind of listening experience during the concerts held at Clawhammer Letterpress since the gallery opened in late 2011. Solo and duo singer-songwriters play old-time music and bluegrass – from Cara Luft to the Cumberland Brothers – in a venue that is simply about listening to the music and connecting artists with audiences.

“We’ve been playing and appreciating acoustic music for years, and then when we moved to Fernie, when we were setting up Clawhammer Press here, we weren’t expecting to have a space large enough to maybe host music once in a while,” Hepher explains. “We didn’t really know how we were going to use the gallery. It’s been an evolving vision for the space. I certainly didn’t need all of it for my presses. So we started looking at what could we do with the extra space, and we also started looking at what live music there was in town.

“In Fernie, it’s a town with lots of great live music venues, but there is an absence … there seemed to be a niche in what a lot of our friends and people that we knew that play acoustic like: solo or duo, singer-songwriter, bluegrass, old-time music. And we felt like there wasn’t any of that style of music happening in town.”

To hear Hepher tell it, much of it sounds all like a happy accident. But the eight or so concerts held there each year have proven to fill a niche – both in Fernie and the music community. With that success, Hepher realized he needed more boots on the ground. More hands make lighter work, that sort of thing. There were a core group of folks willing to lend a hand, so the next logical progression was to formalize the group: the Old Type Music Society was born. The name, of course, complementing both Clawhammer Letterpress and the bluegrass/old time music performed there.

Becoming a not-for-profit has its benefits; grant access is easier, which means the society can offer bands better guarantees, which in turn means the society can attract higher profile musicians. But the society is still in its infancy – it has only co-hosted one concert with Clawhammer so far – and there are many ideas floating around.

“There’s talk of having a banjo and fly fishing weekend – there seems to be something where all of the banjo players we know also fly fish, and a lot of our local helpers are river guides,” Hepher says. “So it seems like a funny but perfect thing, where you go, let’s learn banjo in the morning and go fly fishing in the afternoon.”

There are a few bands lined up for the coming months (with dates to be determined). Edmonton band 100 Mile House are a husband and wife duo that have stunning vocal harmonies and won the Emerging Artist Award at the Edmonton Folk Festival last year. In the fall, Leeroy Stagger and John Wort Hannam, who are both lauded musicians. BC native Stagger has toured with likes of Steve Earle, Joel Plaskett and the Pixies, while Hannam, of Fort Macleod, who has been nominated for a Juno and won various other songwriting awards. And Annie Lou: this is a band that has a friendly blend of old time country and bluegrass. Stay tuned to these pages or look for one of Hepher’s handprinted gig posters around town.

Until then, don’t forget to check out the Wednesday Night Socials, starting this month. Although Redgirl won’t be taking the stage this year, they will be organizing an old-time dance (with a caller!) for the final Social.