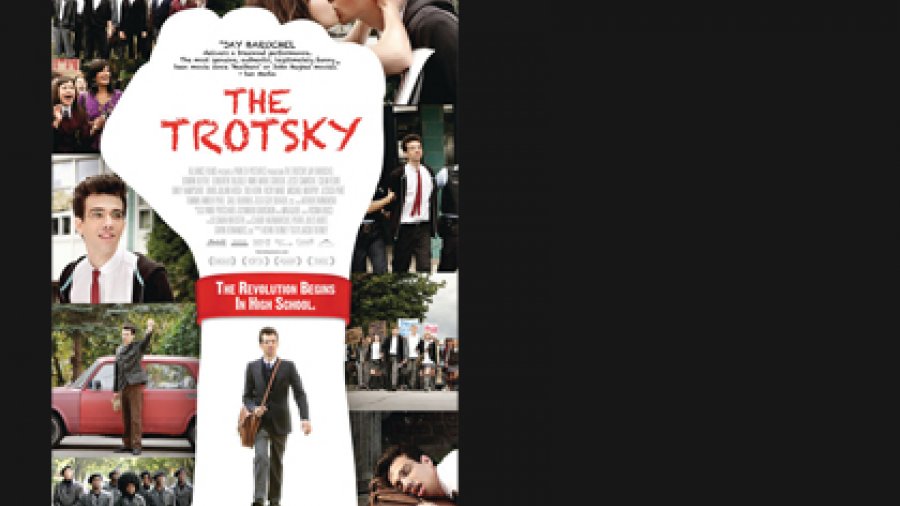 Leon Trotsky (real name Lev Devadovich Bronstein) born on August 7, 1879, was one of the chief architects of the Russian revolution, and played many roles in the Bolshevik struggle to spread soviet style communism throughout Russia. He was a soldier, an orator, an author and an exile. In fact Trotsky’s life was so multifaceted and exciting, that it inspired Montreal filmmaker Jacob Tierney to write and direct a film based on his life. Well, sort of.

The Trotsky is the story of Leon Bronstein, an overly earnest Montreal teenager from a wealthy family, who believes that he is the reincarnation of Leon Trotsky. The movie follows Leon’s adventures as he attempts to unionize his high school. He battles the Principal and Vice-principal with Trotskyite fervour, and eventually succeeds in creating, if not revolution, at least political awareness amongst his classmates.

This is a good movie. It features solid performances from Jay Baruchel (The Sorceror’s Apprentice, She’s Out of My League, Tropic Thunder, Good Neighbors) as Leon, Colm Fiore (The Borgias, Clear and Present Danger, Bon Cop Bad Cop) as the principal, Saul Rubinek (The Contender, Family Man, Wall Street) as Leon’s father, and Emily Hampshire (Snow Cake) as Alexandra, his love interest.

It has to be said that without Jay Baruchel’s masterful performance as the film’s main character, The Trotsky would never have been as good as it is. It’s nice to see that he has finally emerged from the teen-movie wilderness and left his less memorable work behind him.

For all that this is an excellent piece of cinema, however, I do have some problems with it. While the central idea may be social justice and revolution, the film is a superficial treatment of the topic since the students portrayed in the movie are already economically advantaged. Leon is portrayed as a Don Quixote-like figure playing out his role as a revolutionary leader, not because there’s a need to liberate the oppressed masses of West Montreal, but because it is part of his fantasy. In a way this film disparages the Left by saying, however subtly, that only someone who is deranged will fight for a better world.

Jacob Tierney, the director, does an even greater disservice to left-wing politics by portraying the only character with a history of serious social activism as a burned-out pothead, with absolutely no apparent interest in changing the world.

I realize, of course, that The Trotsky is meant to be a comedy, but in the North American media landscape where leftist activists are portrayed as either dangerous extremists or objects of ridicule, it would be nice to finally see a movie where those who advocate for social change are taken seriously but in a non-threatening way.

Please note that this movie is designed to make the audience laugh and it does achieve that goal quite nicely. I certainly found humour in it. However, if you’re looking for a serious look at Trotskyite philosophy, or socialism in general, look elsewhere. The films of Ken Loach (Bread and Roses, Land and Freedom, The Wind that Shakes the Barley) are probably a good place to start.