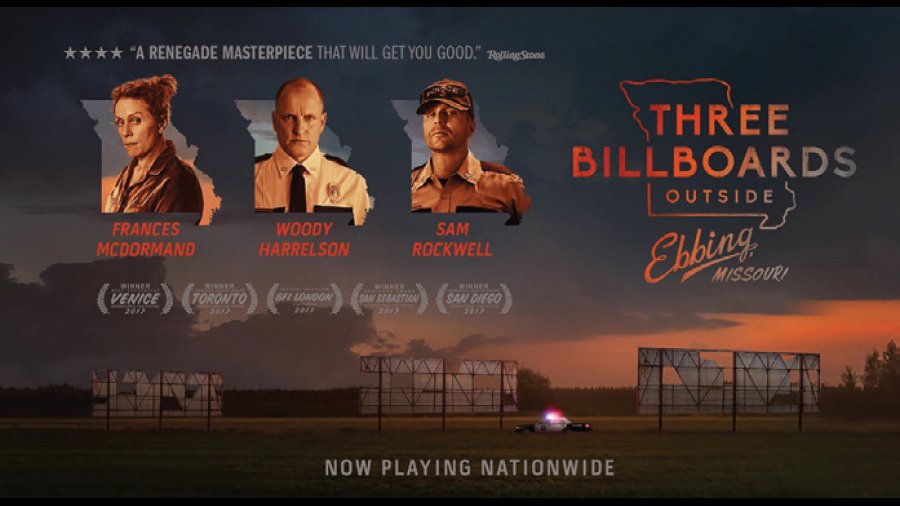 Three Billboards Outside Ebbing Missouri
Written and directed by Martin McDonough, a filmmaker probably best known for the unbelievably dark cult hits In Bruges and Seven Psychopaths, Three Billboards Outside Ebbing Missouri tells the story of Mildred Hayes, a working class mother of two who is searching for the man responsible for raping and murdering her daughter. Frances McDormand plays Hayes, a hard-bitten graduate of the school of hard knocks. She is not above using violence to get revenge. Woody Harrelson and Sam Rockwell do marvellous jobs in supporting roles as two ebbing police officers. John Hawkes, most famous for his role in The Sessions and Winter’s Bone, plays Hayes’ ex-husband. Peter Dinklage is in a secondary role, as James, a used-car dealer who has a crush on Mildred. This film has a great script and although dark, is a comedy and should not be missed.

It
Based on Stephen King’s magnum opus from 1986, this latest adaptation of It deals with six children and their attempt to battle an evil, child-eating clown who lives in the sewers of their presumed idyllic New England town. Bill Skarsgård, son of Stellan and brother to Alexander, plays an extremely frightening Pennywise, the film’s demonic villain, but the highlight of the film is no doubt the six child actors that were assembled to play our heroes.  This is a terrific movie. Two thumbs up.

Thor: Ragnorok
Thor: Ragnorok is the latest edition to Marvel’s Cinematic Universe. It centres on the adventures of Thor and Loki as they seek a way to drive Hella, the evil Goddess of death, out of Asgard, and stop her from laying waste to the universe. Directed by Taika Waititi, the man behind such excellent films as Hunt for the Wilder People and What We Do in the Shadows, this movie is a hilarious romp through space and time, with both Chris Hemsworth and Tom Hiddleston getting a chance to show off their considerable comedic talents.

Also featured in this film are Mark Ruffalo as Bruce Banner/Hulk, Tessa Thompson as Valkyrie, an Asgardian warrior living in self-imposed exile, and Jeff Goldblum as The Grandmaster, a whimsical alien overlord.

Certainly worth checking out.  Two thumbs up.

Ladybird
Ladybird is the tale of Christine “Ladybird” MacPherson, a young girl coming of age in Sacramento, California, in the early 2000s. The film is Gretta Gerwig’s directorial debut. She is best known for off-beat films like Mistress America and Francis Ha. Gerwig does an excellent job bringing this journey of self-discovery to the big screen, with the help of Saoirse Ronan, the wonderful actress who portrays Ladybird, this first-time director manages to create a film that is really quite excellent.