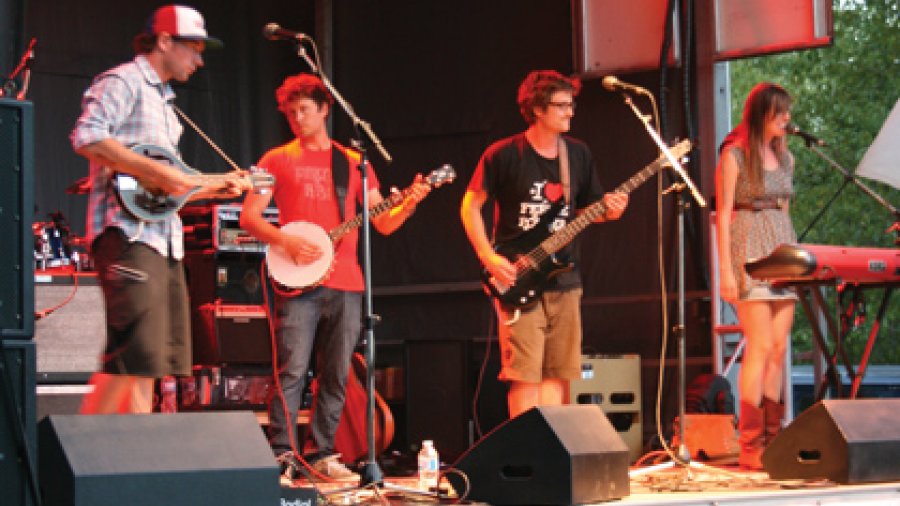 Last month sitting with 30,000 festival goers perched on a blanket of dewy grass and cigarette butts at the Gorge Amphitheatre listening to Mumford and Sons, I thought, "this is the same crowd that cheered passionately for Macklemore and Ryan Lewis' hip hop show two nights ago." Isn't it wonderful that in today's land of music, we are completely open and moved by so many genres? Jazz, Metal, EDM, Rock - you can't just pick one and the lines in between are getting blurry.

There was I time in my life that the majority of my cd collection was of the punk variety - I didn't waver off the path too much. (Okay, maybe one Destiny’s Child cd.) While this punk collection was a badge of honour deeply rooted in my self-identity, today you couldn't peg me for a genre. I'm open to it all and all have a place in my heart, plus I'd be a fool to cramp up behind my comfort zone.

Despite what some critics say, this is an exciting time for music. Combing over the major US festivals and even the small time festivals around BC, the lineups are very eclectic. Millions of people will be exposed to new and old music this summer - let the inspiration flow! When else have you seen banjos and dubstep in the same lineup?
Next time you see a kid with fat earphones don’t be so quit to judge. They could be listening to anything.

Anything goes in music. Retro sounds are back and intact, and have also been reworked and tweaked. New genres are constantly evolving as well. Bands like the XX, MGMT, or Canada's favourite strange girl Grimes are all pushing us forward. There is so much happening it's hard to keep up, but while we march forward we still seem to keep a firm grip rooted in the past. Superstar DJs Daft Punk who spearheaded the EDM movement in the 90s turned out an album last month that is unquestionably steeped in nostalgia. Terrific! New vs. old. Old and new together. This. Is. Awesome!

Bands these days are less concerned with a genre and more with a marketable and distinct brand - they want to be different. Take our own hometown band, Shred Kelly, who has not only invented the genre "Stoke Folk" but has been successful with its ski bum brand, which Fernie and now the rest of Canada are eating up. At any given Shred Kelly show the crowd is unpredictable looking - moms and raver kids side by side, dancing together. You could say the same for Wapiti headliners Current Swell, selling a laid back island vibe with every show and attracting all walks of life.

Discovering a new song or band awakens something inside of us. It pumps us up, it makes us reflect or it can inspire us beyond what we thought capable. This exciting time has had a major influence on our local music festival, Wapiti. There is so much happening and Wapiti brings a small, but meaty, slice to Fernie. The passion behind Wapiti was to reveal new artists and present new music to festival goers, giving them something to walk away with. As much as event organizers honour past musicians, they have to be open and welcome the new because somewhere right now the next Arcade Fire or Jimi Hendrix is practicing in a basement.

It's been a rewarding experience being involved with Wapiti over the last three years, especially with the support and love of the community. Look forward to hearing some stoke folk, rock and roll, bangra, island tunes, roots, country, and blues at this year’s festival, and most of all to enjoying yourself.

Next month look for the official Wapiti Programme in the Fernie Fix along with an overview of artists and more on what to expect at Wapiti 2013 in this column.