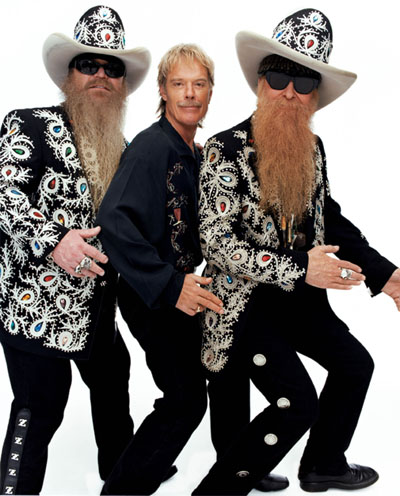 Mud-spattered grins are descending from the woods in full force these days. Shorts and sunshine. It’s the I-came-for-the-skiing-and-stayed-for-the-summer season. And there are plenty of men out on the trails, but there is some very serious representation by the women. “She’s got legs, and she knows how to use them.”

Although perhaps written about a different type of “fast” woman, those lyrics were penned 27 years ago by a band that is celebrating its 40th anniversary this year. The major milestone is made sweeter by the fact that ZZ Top has never gone through any sort of lineup shuffle. It has been Billy Gibbons, Dusty Hill and Frank Beard since 1970 and it will be Billy, Dusty and Frank performing in Cranbrook. As guitarist Billy Gibbons says, “Same three guys, same three chords.” Legs, indeed.

When a band has been around for this long, it’s hard not to wonder how its members managed to keep it together, especially when so many that have attained similar heights have crashed and burned.

“Oh mercy … the ‘sanity’ issue is a direct contradiction to what’s in the tall tales of this thing,” Gibbons says. “The kind of trouble we get into is just bluesworthy … alert the media!

“The audience, of course,“ he adds, “is invited to bear witness.”

While the band hasn’t released a studio album since 2003, that isn’t because the guys have been resting their laurels. It may have appeared that way, with the release of a retrospective box set (2003’s Chrome, Smoke & BBQ), followed by a Best of (2004’s Rancho Texicano) No, ZZ Top has been touring aplenty, and the band’s much talked about (almost fabled) 15th studio album has been recorded with famed producer Rick Rubin (Beastie Boys, Run DMC, Johnny Cash, Slayer, Gogol Bordello, etc, etc).

He is cryptic—which is probably only natural, given the amount of press the album has been given over the last five years. To be fair, however, much of the talk has surrounded this recording being a celebration of ZZ’s 40 years.

Honestly, it’s always kind of surprising how long it takes to put an album out, especially when you keep yourself busy with plenty of projects. Gibbons, for example, has a small recurring role on Bones and spends time at LA’s Sunset Marquis Hotel, famed for its recording studio. He also likes to collude with other musicians, sharing the stage and studio with everyone from Kid Rock to Brooks & Dunn to Nickelback to Ben Harper. He’ll have to come up with an all-time dream collaboration though.

“Checked off that box last year when we got to work with Jeff Beck at the Rock and Roll Hall of Fame 25th Anniversary event at Madison Square Garden,” he says. “There are a lot of great ones out there we'd like to collaborate with: Flaco Jiminez, Sean Paul, maybe the North Mississippi All Stars. You can't force these things. Sometimes, as with Mr. Beck, they just come to pass if they were meant to happen.”

Gibbons also keeps busy taking in the Sunset Strip. He may be an avid collector of custom cars and motorcycles—like the CadZZilla and the HogZZilla, and, of course, the Eliminator—but he’s added a non-combustion ride to his stable these days. His cruiser needs a bit more flash to be worthy of “ZZilla” status, but it’s impressive nonetheless. He’s got legs.

ZZ Top performs at the Cranbrook RecPlex on June 8 & 9.