These are the Mayors I Know 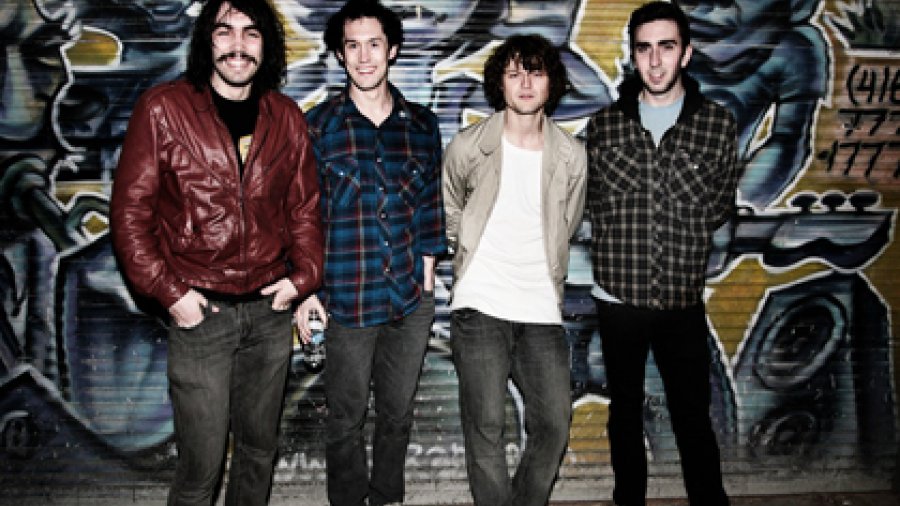 Even though the members of Hollerado were barely born when Kids in the Hall’s Bruce McCulloch first sang “These Are the Daves I Know,” they have a pretty good story about meeting the comedy troupe’s Dave Foley. They didn’t just meet him, but got him in the back of their van and convinced him to be in a music video.

The night in question did involve underage drinking in a parking lot, but it’s not as sordid as it sounds. The four-piece from Ontario were set to play a gig at a bar in LA, where a friend promised to get Dave Foley to the show. Hollerado took this with a grain of salt, of course, until one of the four people in the audience was actually one of the Kids. Pretty cool for four small-town boys, right? The problem was, however, the rhythm section of the band—bassist Dean Baxter and drummer Jake Boyd—weren’t old enough to actually hang out in the bar. The pair had to be escorted on and off the stage before and after the performance.

Baxter and Boyd were pretty pissed off that they couldn’t hang out, and went to the band van to have a couple of beers to commiserate. Hollerado guitarists, Menno Versteeg and Nixon Boyd, did what any good friends would do—they persuaded Foley to join them all in the parking lot, in their van. Hollerado has shown a knack for hearing opportunity’s knock, and this time was no different.

“After a couple of beers we told him that we had this grant to make a music video, and if he wanted to be in it, that would be totally okay with us,” Baxter says. “And after a couple more beers, he totally agreed to it.”

Directed by George Vale, the video for “Americanarama”—if you haven’t seen it, get thee to YouTube—features Foley in a hilarious parody of infamous American Apparel owner Dov Charney. The experience cemented a friendship between the band and Foley, who has surprised by coming up on stage at some of their other shows.

“He’s hilarious. He’s become a good friend of ours and a great supporter of the band ever since then,” Baxter says. “And he’s just a really, really nice guy and super funny. I wish I could have him around all the time.”

You get exactly the same sense of the band. Its indie rock is tinged with a sense of humour and its stage show is loose, fun and full of showmanship. The guys like to engage their audience, and their gig at the Central at the end of the month shouldn’t be much different. Hollerado’s fall tour into BC is heralded as the Meets the Mayor tour. It stemmed from the band’s disappointment in Toronto’s ultra conservative mayor Rob Ford, who has opposed things like funding for bike lanes and the city’s massive Pride Parade. A joke tweet about wanting to meet the cool mayors out there turned into a story after the mayors of Vancouver, Calgary and Regina tweeted back about wanting to come to a show. And the story turned into a tour idea.

Hollerado is not only inviting folks to email (holler@hollerado.com) them questions for their respective mayors, but is also inviting mayors and mayoral candidates in BC to come and speak at a show. The band plans on blogging about its experiences with this very different experiment in democracy.

Getting down on the dance floor for the local politicians is, of course, optional, but just imagine how awesome it would be to see Mayor Cindy Corrigan dancing.

Hollerado performs at the Grand Central on Wednesday, September 28.