By Teaching You Will Learn 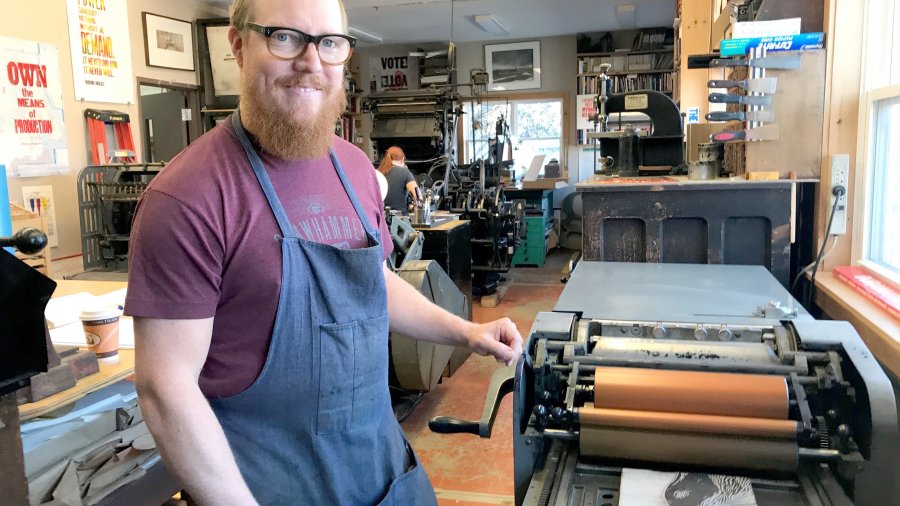 My first significant visit to Fernie was to help teach a letterpress workshop just over 11 years ago. The idea of launching Clawhammer Press in Fernie was not even a twinkle in my eye when a friend asked me to co-teach for the weekend alongside my mentor, Peter Bartl. Saying yes radically changed the direction of my life.

Back in 2003 an ancient letterpress and mountains of type had found a willing home in my garage. The ensuing years were spent cleaning, organizing and gingerly testing the process. The historic physicality of it was a welcome break from my ‘real’ work designing logos and websites—glued to a shiny screen for much of the day. By the time I figured out the basics of the printing process I knew I had to find a way to turn it into a full-time gig, but acquiring knowledge about a historic trade is not an easy or linear journey.

At that time, the internet as we know it today was still in its infancy. YouTube wouldn’t come online for another two years. Websites were more or less just fancy spreadsheets with logos at the top. Clunky FlashTM animation was the flavour of the month. There were no forums or user groups for letterpress printers. To learn how to use this big machine I had to purchase a leather-bound apprentice manual titled ‘Platen Press Operation’ from a fledgling online bookseller called Amazon. The book was written in the typically stiff manner of red-seal trade manuals at the time—most of the chapters started with phrases like ‘the aspiring young printer should never…’ and ‘the apprentice should always…’ which I always imagined being delivered in a crisp British accent. I started at the beginning and worked my way steadily through that book in what amounted to a self-guided apprenticeship.

A couple years into my journey I met Peter Bartl and Jane Merks at an arts conference. Peter (the master printer) and Jane (the artist), operated PB&J Press in the West Kootenays and they promptly took me under their wing. I spent weekends at their well-appointed home studio and learned many formal and informal lessons printing alongside them. Peter and Jane used a different style of press (which now lives in my studio), but the process was starting to feel more familiar and I had a growing confidence in my ability to troubleshoot and solve the mysterious problems that arise when printing with 100-year-old equipment.

When I was asked in the winter of 2011 to co-teach that workshop in Fernie, I had serious imposter syndrome. I certainly didn’t have the formal training Peter did (though he often eschewed that knowledge in favour of ‘playing with type’ as he put it) and I wasn’t really sure what I had to offer the group, but I said yes because it meant a weekend spent with a letterpress and an opportunity to glean some more knowledge from my mentor.

Over the course of the weekend I was surprised to learn just how much knowledge I had acquired in my self-guided apprenticeship. The workshop was conducted on a platen press (more like mine than Peter’s) and he would often defer to me for troubleshooting or technical explanation. By the end of the weekend Peter felt less like a mentor and more like a colleague. That workshop provided me with not only enough confidence in my knowledge to think about making the transition to a vocational printer, but also with a potential town in which to build my dream of a fine-art letterpress studio and gallery.

Six months after that workshop we moved to Fernie. A month after that we signed a lease on the space that would become Clawhammer Press. In truth, I didn’t have enough knowledge about my craft or about retail business to start, but putting myself out there and sharing my knowledge helped me build the confidence I needed to give me momentum to push through the gaps in my knowledge. Teaching solidified the learning I had gained in the early part of my journey into the stepping stone I needed to propel me towards my goal. To remember that life lesson, I keep a print hanging in my studio that reads: by learning you will teach, by teaching you will learn. It’s a good reminder that we rarely feel ready, but each one of us has something unique to share and the process of explaining that knowledge to others impacts us in important ways that in turn change our own lives. Keep teaching. Keep learning.