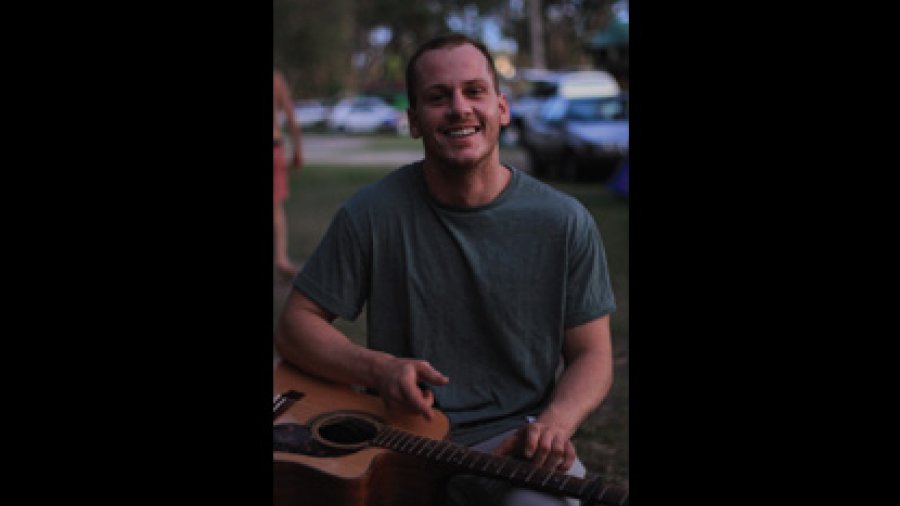 Live music is the most transitory, the most ephemeral of all the art forms. Here as it is played, but the moment the note dies, it only exists in the listener’s memory. This mirrored in the travelling acts that grace the various stages in town and, in Fernie, mirrored in the temporal workforce of the seasonal aspect of town.

So let’s make this introduction quick, because it won’t be long before Bevan Cuthbertson is gone and adventuring through Europe. If you come across the Australian native playing the Brickhouse open mic or at Infinitea or the Royal, you’ll need no introduction. He’s the dude that makes a whole lot of noise slapping his guitar, which is on his lap. Rhythm and guitar all in one. No extra instruments strapped to his neck or foot – just two hands and a guitar. Slap-lap guitar. If you’re thinking Jeff Healey or slide steel, there are a few videos of him on YouTube that’ll set you straight.

“It’s definitely a different style and something that grabs people’s attention on many levels,” Cuthberson explains. “I originally learned a song by an artist called Andy Mckee. His style was the traditional position of the guitar but played with hands coming over the top of the neck and a lot of rhythm played on the body of the guitar. Once I played around with that, I guess I became bored. I wanted to make it harder, more complex and more visually entertaining. So I layed it on my lap and played away like a piano and a guitar and bashed it like an old TV that won’t work.”

At this point, Cuthbertson feels more comfortable playing on his lap. Although he can play guitar in the more classic sense, his lap style employs complex rhythms and open tuning, so it can be challenging reverting back to a guitar on a strap.

“It makes it very difficult for people to jam along,” he adds. “So that’s when I get back to the old classic guitar!”

Bevan Cuthbertson – a winter transplant from Byron Bay and something of a carpentry wunderkind (he almost made the cut to represent Australia in the 2013 Trade Olympics) – came to Fernie through traveller word of mouth. He was attracted to both the big mountain adventure, as well as the more intimate community. Now that he has spent some time here, he is blown away by the amazing talent we are squirreling away – and for the many opportunities to share his talents.

Cuthbertson will be joined on stage at Infinitea by local Linden Gigliotti (who was last month’s feature artist) and Emilie Fitton.

“I’ll be slapping away and playing some folky toe tapping tunes in a way most of you will have not seen,” Cuthbertson says. “So get down to infinite, Grab some beers, amazing food and enjoy my last show before I leave Canada.”

Sidebar:
If you haven’t seen music at Infinitea, I urge you make your way there. The shows are earlier than at many of Fernie’s other venues. Over several years, owners Stephanie Fleming and Coralee Salomons have worked hard to make it a place where both new and accomplished performers can relax and give truly intimate shows.

Coming up in February
6: Rose Ranger is a singer-songwriter from Vancouver who has had her music played on shows ranging from The Young and the Restless to Dawson’s Creek.

13: Ben Wilkinson is an electronic folk artist from New Zealand. Imagine folk guitar and singing over low-fi beats and melodies. Quite heavenly.

14: Hark Raving Sirens Speaking of heavenly. If you haven’t had the pleasure of hearing this trio sing some of your favourite songs in harmony, get thee down to Infinitea. Especially perfect for a Valentine’s Day treat.