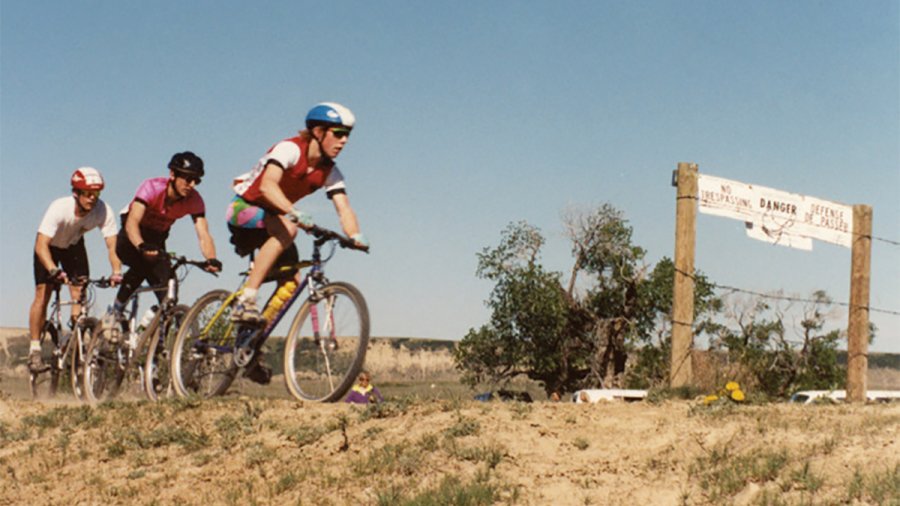 In the late 1970s in Marin County, California, an intrepid group of humans loaded their coaster-brake beach cruisers into the back of a pickup and drove up a logging road to the top of Mount Tamalpais. From the top, decked out in protective cut-offs and Adidas sneakers, they raced to the bottom—hippie hair streaming out behind them. Eventually someone decided they’d rather ride up than take a truck, so they fitted their cruiser with touring gears and in doing so invented a new sport: Mountain Biking.

By the mid-1980s there were a handful of companies dedicated to building mountain bikes. In July 1986 the first issue of Mountain Bike Action magazine hit the newsstands. By 1987 Canadian bike shops were filling up with these fascinating machines and in 1988 I bought my first real mountain bike for $460. That bike, and that idea, would set me on a lifelong path of love for the sport.

When I started riding in Lethbridge, there were no bike trails—just goat paths and a valley full of potential. I’d spend every day I could out riding the ‘roller coaster’ as I called it… up one coulee, down the back side, repeat. The race scene was non-existent, so the only reason to ride was for the sheer pleasure of conquering the next hill, of braving the next descent. Locally there were only a handful of us out there—a scruffy lot full of joy and dedicated to the sport. I felt connected to a group of people that loved the same things: the simple machines, the trail, and the challenge.

As the sport grew up, so did the race scene, and by ‘92 I was racing all over Western Canada on a Marin Team Issue. Through the 90’s I continued to work as a tech in bike shops, still riding for fun. In 2003, that Marin bike was stolen from my shed, so for the first time in a decade I had to go bike shopping. A lot had changed in those ten years: the geometry of the frames, the character of the scene, and the kind of companies that built the bikes. The new bikes all felt strange to me—like a motorcycle without a motor. It seemed like the sport had entered its teenage years and everything felt awkward. I lost heart somehow and my new bike sat unused in the shed.

With a bit more time on my hands during the era of Covid, I tracked down a Rocky Mountain Blizzard frame from 1997 and put together a top-of-the-line retro ride to pound into the hills around Fernie. The moment I threw a leg over it I found what I’d been missing. This new/old bike has unearthed the values that brought me to mountain biking in the first place: the simplicity of the machine, the beauty of the trail, and the shared challenge of the ride. This whole process has reaffirmed for me my deep-seated belief that we should not throw things out because they are old— be they ideas or machines. Of course we should keep pushing ourselves and our knowledge and building better things, but if we lose sight of the reason we started building them then it’s all for nought. As I look around my life I see a multitude of old things: a ‘71 VW van, a room full of ancient printing equipment, a stable of vintage musical instruments, but these things all share common values: simplicity, quality, connection.

Mountain biking lost some of its soul in the 1990s when big business saw an opportunity to make a lot of money. The technology has progressed a lot, but I believe our progress can only be evaluated clearly, and reined in effectively, by keeping our eyes on the values that inspire it. We need to be wary of the idea of progress for progress’ sake. New is not better if we are asked to carve out some of our humanity to gain it. I’m reminded again, as I gleefully chase after spaceship-carbon bikes on my vintage steel wheels, that simplicity itself is a noble idea, and worth pursuing. In that way the life story of mountain biking can be a good metaphor for many areas of our lives.

Let’s not forget that the things we make are tools to connect us to ourselves and to our community. When we start looking at the tool as an end point, we start losing the human part. I enjoy mountain biking because of my connections to the roots of the sport, and now to the people who continue to whoop with joy as they race down the singletrack. No matter our choice of steed, our smiles at the bottom will be exactly the same size.