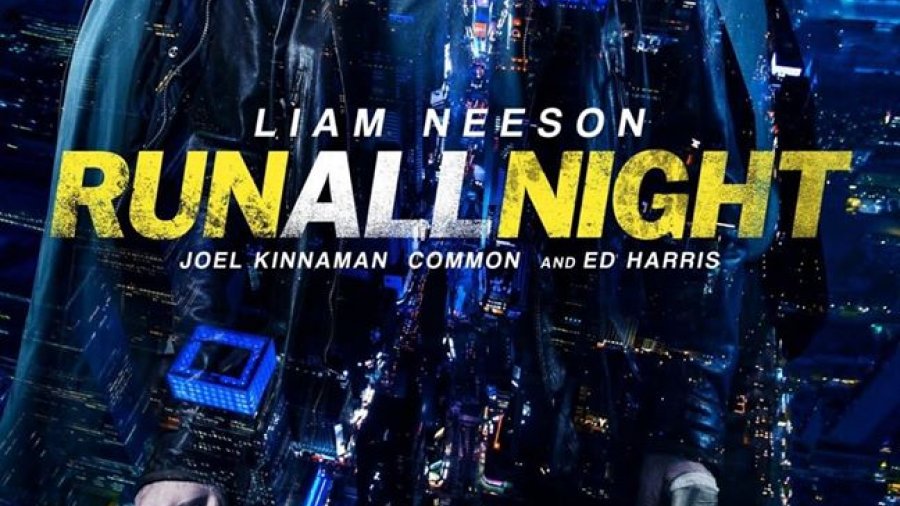 Liam Neeson, the star of such films as Schindler's List, Kinsey and Batman Begins, has recently forsaken big budget Oscar-bait movies in favour of roles that require him to be strong and silent, while carrying a big gun. Starting with the absolutely atrocious Taken in 2008, he has turned out a series of middle of the road shoot'em up action movies which he has managed to elevate with his considerable screen presence.

Neeson's latest foray into the realm of macho-hyperviolence is Run All Night, in which he plays an alcoholic New York hit man who over the course of one night struggles to protect his son and himself from the Irish mafia, Neeson's former employer. Also in the cast are Ed Harris (A Beautiful Mind, Gravity, The Abyss, The Rock, A History of Violence) as the mob boss who is the main villain of the piece, and Joel Kinnaman as Neeson's son. Kinnaman has previously appeared in RoboCop and the television series The Killing. He is a decent actor with significant talent so, it is unfortunate that he has been saddled with this role. His character is both ineffectual and annoying, and places no great demand on Kinnaman's acting ability.

A more challenging role is played by Vincent D'Onofrio (Full Metal Jacket, Men in Black) as the hard-bitten but compassionate New York City police detective who has been trying unsuccessfully to arrest Neeson for years.

Another actor who turns out a great performance is former rapper, Common, who plays Mr. Price, a sinister, emotionless hit man who is charged with the task of eliminating Neeson and his son. Common was previously in Brick Mansions, Smokin' Aces, Selma, and Wanted, and in Run All Night he looks as though he has just wandered off the set of Ridley Scott's Blade Runner, futuristic handgun and all.

It has to be said that the best scenes in the film are those between Neeson and Harris. The characters are supposed to be friends who have had a falling out and these two actors sell that image. You can honestly believe that they have been friends for 30 years, and unlike Kinnaman, their acting abilities are used to their fullest extent, as they show compassion and pathos in equal measure.

Jaune Collet-Serra directs the movie after working with Neeson on two other action films, Unknown (2011) and Non-Stop (2014). The collaborations have been quite successful mainly because of Neeson's acting ability, and are a step up for Collet-Serra after directing the terrible House of Wax starring Paris Hilton in 2005.

The story has at its centre two broken relationships, one between the two old friends and the other between a father and his son. The script is very dark, but not bleak, and its darkness is amplified by a nighttime setting dominated by menacing cityscapes.

This isn't a great movie, but it's not particularly bad either. In a world filled with supremely awful block busters where every filmmaker seems to be chasing the Michael Bay aesthetic, you can do worse than going to the theatre to see this film.