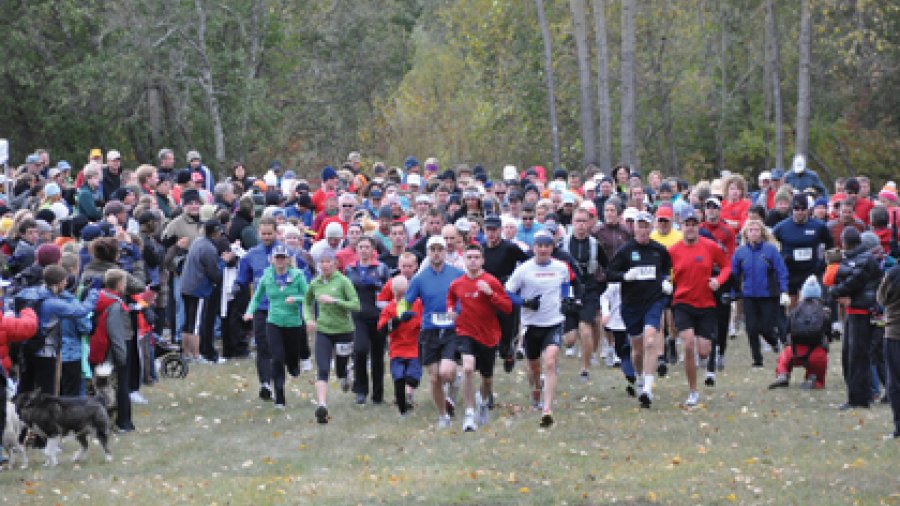 On October 2nd an annual 21km race and three-person relay takes over the beautiful trails surrounding Fernie. The Fernie Half Marathon attracts runners of all abilities to finish the running season as the golden leaves fall and we say farewell to the summer sunshine. As a result of some cancelled plans, an unlikely suggestion from a well-meaning friend and altogether far too much white wine for a Tuesday night I woke one April morning with the knowledge that I’d committed myself to participating in a relay team that I was ill-prepared for and even less capable of. I was going to run a marathon. Okay, a half marathon. Well, a third of a half marathon. Point is; I was going to run. For several kilometres. In front of people I knew. This is my story.

May – Motivation matters…
Having fallen off the exercise wagon about a year ago with a very unceremonious thud, a slow and steady start made sense. My legs needed to re-familiarize themselves with the ‘land beyond the couch’ and running, while possibly a great idea to the average fit Fernie-ite, was still only that to me- a misinformed, fairly delusional thought that training would be a ‘fun’ way to enjoy the summer. (No points for guessing I’m not a summer person.)

The plan was to start with three, two-hour walks each week. I roped (read; cajoled and generally harangued) a similarly athletically-challenged friend into a once-a-week ‘training’ date. We would both need to motivate ourselves the rest of the week so we made firm verbal promises to each other to stick to the program and equally firm (but completely silent) ones to turn a blind eye when we didn’t. Four months was plenty of time to train after all.

June – Sure I can do this, I’ve still got 3 months…
When you’re at the ‘I’ve still got X months…’ stage, that’s the time that you need to ramp up your training, push yourself twice as hard and stretch like you’ve never stretched before. Hindsight is a wonderful thing.

July – A bump in the road
Having started the ‘couch to 5K’ podcast in late June, I was excited at the prospect of knocking off the minutes as July progressed. The podcast is a specific program that starts with just eight minutes of running, one minute at a time interspersed with walking, and slowly increases each week until you are running thirty minutes without stopping.

Just three weeks in, a trip to Physio diagnosed tendonitis in my left calf muscle and recommended no running for four to six weeks. This put a serious crimp in my ability to brag about how well I was doing and I found myself relegated back to walking. Frustration was replaced with camping trips and music festivals. After all, there was still ten weeks until race day.

August – Setting the pace
Having a running buddy is a wonderful thing. Having a running buddy who accommodates your gimpy leg into their program and even tells you it helps with their own motivation is irreplaceable. It was during one of these sessions while watching my friend run off into the distance that the thought occurred: I miss running. Who knew?

September – A step in the right direction
With an ‘OK’ to pick up the pace and orthotics on the way, it was time to hit the trails again. A month of biking, stretching and strength training had kept me on track and it felt great to get back out there. At least up until the point where I realized that there were only three weeks until race day.

My story isn’t remarkable but the reason for it is. The Fernie Half Marathon is a local institution, one that got Fernie running years ago and kept it running. And that well-meaning friend with the unlikely suggestion that got all this started? Yes that was me. I’d like to thank my good friend and running buddy Sara for going along with my random ideas and keeping us both on track, and to Chantel for stepping in as the third person in our team. The three of us met years ago while organizing another Fernie event- the Canadian Cancer Society Relay for Life- so it’s fitting that we’re back together to relay again; there’s no other team I’d rather be on. Come and cheer us and all the other racers on at the Fernie Half Marathon on October 2nd.