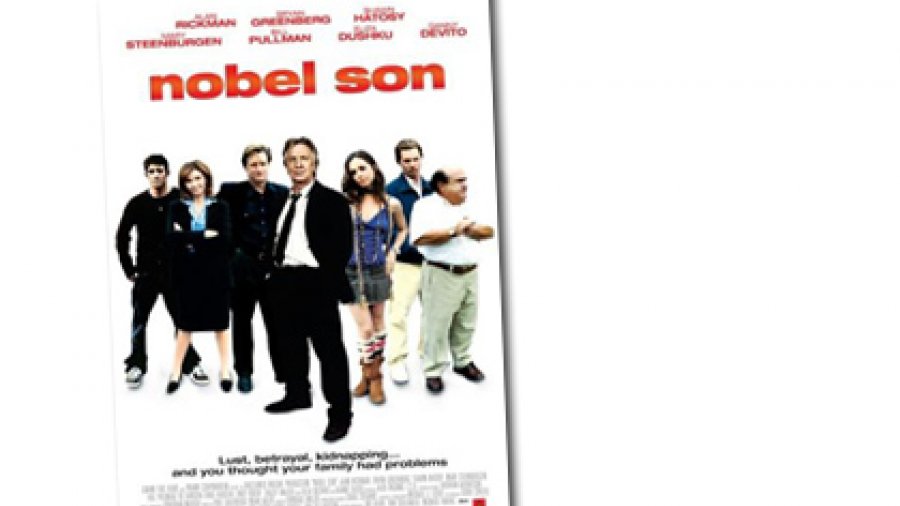 A movie does not need a large budget in order to be good, or even great. Movies made on a shoestring can make us laugh (Death of a High School President, Juno, Monty Python and the Holy Grail), make us cry (Love Liza, Land and Freedom), or make us scream in terror (The Blair Witch Project, Paranormal Activity). But then there are low budget films that are mediocre.

Such a film is Nobel Son. This movie tells the story of Barclay Michaelson, son of spectacularly arrogant Nobel Laureate, Eli Michaelson. In a convoluted plot, Eli becomes the target of an illegitimate son, the result of an extramarital affair with the wife of a former research collaborator. In a cleverly crafted kidnap scheme, Barclay is held for a one million dollar ransom, equivalent to the award from the Nobel prize.

As I have mentioned, this is not a great film, although all of the actors involved do the best with what they have been given. Alan Rickman(Die Hard, Truly Madly Deeply, Love Actually), who plays Eli Michaelson, gives a good performance as an arrogant, patronizing, insensitive gasbag. Danny Devito(Ruthless People, Hoffa, Twins, The Big Kahoona, The Virgin Suicides, The Rainmaker), who plays the Michealson's obsessive compulsive neighbor, George Gasner, gives a wonderfully quirk and undoubtedly sympathetic performance. Mary Steinbergen (Elf, What's Eating Gilbert Grape) who portrays Michaelson's long-suffering wife, comes across as very sympathetic, but resourceful with hidden depths that only become evident near the end of the film. Bill Pullman (Spaceballs, Independance Day) and Eliza Dushku (City by the Sea, True Lies, Bottleshock) also appear in the film, one as a police detective and the other as an artistically gifted, but unstable, nymph. Both give decent performances.

The problem with Nobel Son is that it is edited in such a way that scenes meant for character development are cut short. This means that there is little information that might allow the audience to connect emotionally with the characters and give a greater understanding of the interactions between them.

The other major problem is the sound track provided by electronica virtuoso Paul Oakenfeld. It is loud, it is jarring, and it dominates almost every scene. If it wasn't for the soundtrack, it would be possible to focus more on the characters and plot of the movie, but the music is too intrusive for this to happen. It's as though the whole movie is filmed upstairs from an Amsterdam nightclub.

If you wish to see a low budget film about kidnapping that has good acting, a good story, and is blessedly eurobeat free, check out The Disappearance of Alice Creed, starring Eddie Marson and Gemma Atterton.

I can't really recommend this movie. However if you really are a huge fan of Paul Okenfeld's music, you'll probably think this film is absolutely wonderful.