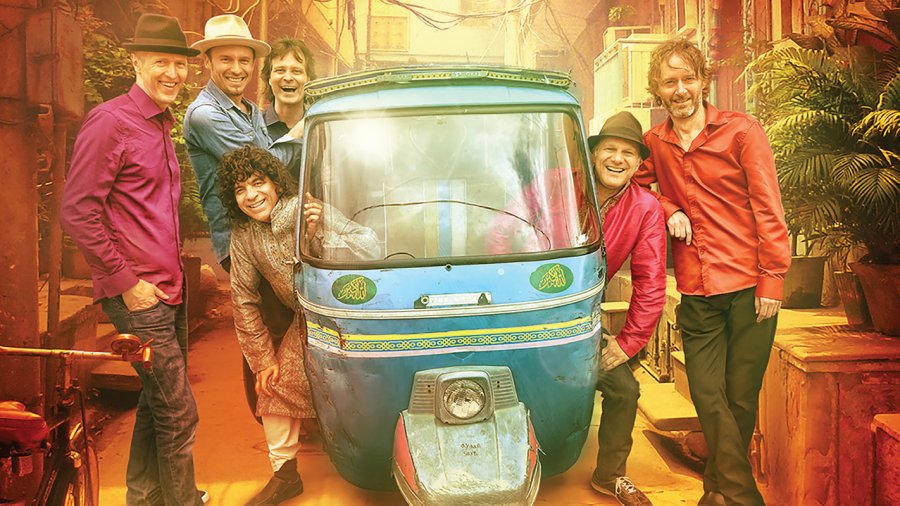 “We have a bunch of paints in our paint box and we start throwing it all at the canvas and we start seeing what looks beautiful and what looks like it would make your eyes hurt,” Chris McKhool says of the Sultans of String’s creation process. “It’s just trial and error.”

McKhool’s band takes influences from around world, maybe a little bit of Gypsy-jazz guitar with some Arabic folk. Add a funky bass line and some Cuban percussion, and you’ll have the pieces to make a beautiful mosaic of sound. In so many ways, Sultans of String are the quintessential Canadian band, with each member drawing from the cultural palettes of lives before the journey to Canada.

Chris McKhool (violin) and Kevin Laliberté (guitar) cofounded the band, creating SoS’s signature sound as a duo in 2004, before being joined by Drew Birston (bass), Rosendo “Chendy” León (percussion) and Eddie Patton (guitar). Sultans of String have also been joined by many special guests, including two of who will be joining the band in Fernie. Anwar Khurshid is a sitar master originally from Pakistan and whose music has been heard on screen, including inLife of Pi. He also was a key contributor to SoS’s latest album, 2015’s Subcontinental Drift. Jeff Faragher is a cellist out of Nelson and is the musical and artistic director of Symphony of the Kootenays.

In between their band’s jig through Western Canadian dates, the band will jag to Ottawa for the Junos, at which Subcontinental Drift is up for World Music album of the year.

“The Junos are really an amazing way for people to discover the band,” McKhool says. “And of course, a great excuse for my mother to get out her best shiny gold dress and go to the Junos and be really proud of her kid.”

On Subcontinental Drift, SoS takes on Bob Dylan’s “Blowin’ in the Wind,” interpreting the iconic song through its journey to Pakistan and back to North America.

“If you listen to [the album], it’s all about the experience of finding oneself,” he says, “Whether it be Chendy and Anwar or my ancestors coming to Canada as a place to find freedom and hope.”

“When I discovered that Anwar had known the song ‘Blowin’ in the Wind’ back in Pakistan, I was amazed,” McKool adds,“but it also makes sense that a song, which is so well written and so powerful, could survive half a century and cross all politcal and linguistic and religious and cultural and musical barriers and that he would learn that there and then bring that knowledge to Canada and then we would create something that is really a Canadian rendition of that song. So for me, it’s quite fantastic.”

In an important way, Sultans of String are the beautiful antithesis to the politics of division. Instead of marking distinctive lines between musical legacies, the band playfully uncovers the similarities of each style. When the members get together to write their sonic stories, they never know what direction the music is going to take, but know that it will an adventure, fun andrevelatory and full of our shared humanity.

Sultans of String perform with special guests Anwar Khursid and Jeff Faragher at The Arts Station Tuesday, April 4 at 8pm.