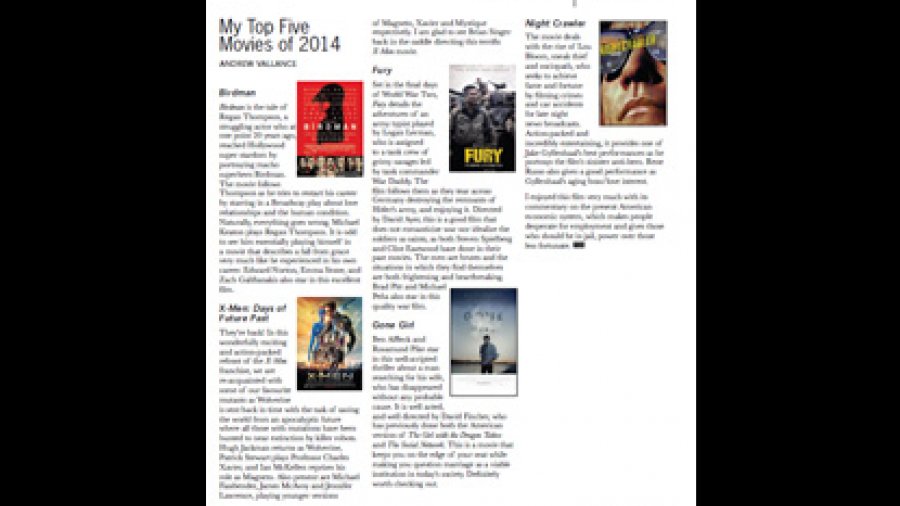 Birdman
Birdman is the tale of Regan Thompson, a struggling actor who at one point 20 years ago, reached Hollywood super stardom by portraying macho superhero Birdman. The movie follows Thompson as he tries to restart his career by starring in a Broadway play about love relationships and the human condition. Naturally, everything goes wrong. Michael Keaton plays Regan Thompson. It is odd to see him essentially playing himself in a movie that describes a fall from grace very much like he experienced in his own career. Edward Norton, Emma Stone, and Zach Galifianakis also star in this excellent film.

X-Men: Days of Future Past
They're back! In this wonderfully exciting and action-packed reboot of the X-Men franchise, we are re-acquainted with some of our favourite mutants as Wolverine is sent back in time with the task of saving the world from an apocalyptic future where all those with mutations have been hunted to near extinction by killer robots. Hugh Jackman returns as Wolverine, Patrick Stewart plays Professor Charles Xavier, and Ian McKellen reprises his role as Magneto. Also present are Michael Fassbender, James McAvoy and Jennifer Lawrence, playing younger versions of Magneto, Xavier and Mystique respectively. I am glad to see Brian Singer back in the saddle directing this terrific X-Men movie.

Fury
Set in the final days of World War Two, Fury details the adventures of an army typist played by Logan Lerman, who is assigned to a tank crew of grimy savages led by tank commander War Daddy. The film follows them as they tear across Germany destroying the remnants of Hitler's army, and enjoying it. Directed by David Ayer, this is a good film that does not romanticize war nor idealize the soldiers as saints, as both Steven Spielberg and Clint Eastwood have done in their past movies. The men are brutes and the situations in which they find themselves are both frightening and heartbreaking. Brad Pitt and Michael Peña also star in this quality war film.

Gone Girl
Ben Affleck and Rosamund Pike star in this well-scripted thriller about a man searching for his wife, who has disappeared without any probable cause. It is well acted, and well directed by David Fincher, who has previously done both the American version of The Girl with the Dragon Tattoo and The Social Network. This is a movie that keeps you on the edge of your seat while making you question marriage as a viable institution in today's society. Definitely worth checking out.

Night Crawler
The movie deals with the rise of Lou Bloom, sneak thief and sociopath, who seeks to achieve fame and fortune by filming crimes and car accidents for late night news broadcasts. Action-packed and incredibly entertaining, it provides one of Jake Gyllenhaal's best performances as he portrays the film's sinister anti-hero. Rene Russo also gives a good performance as Gyllenhaal's aging boss/love interest.

I enjoyed this film very much with its commentary on the present American economic system, which makes people desperate for employment and gives those who should be in jail, power over those less fortunate.